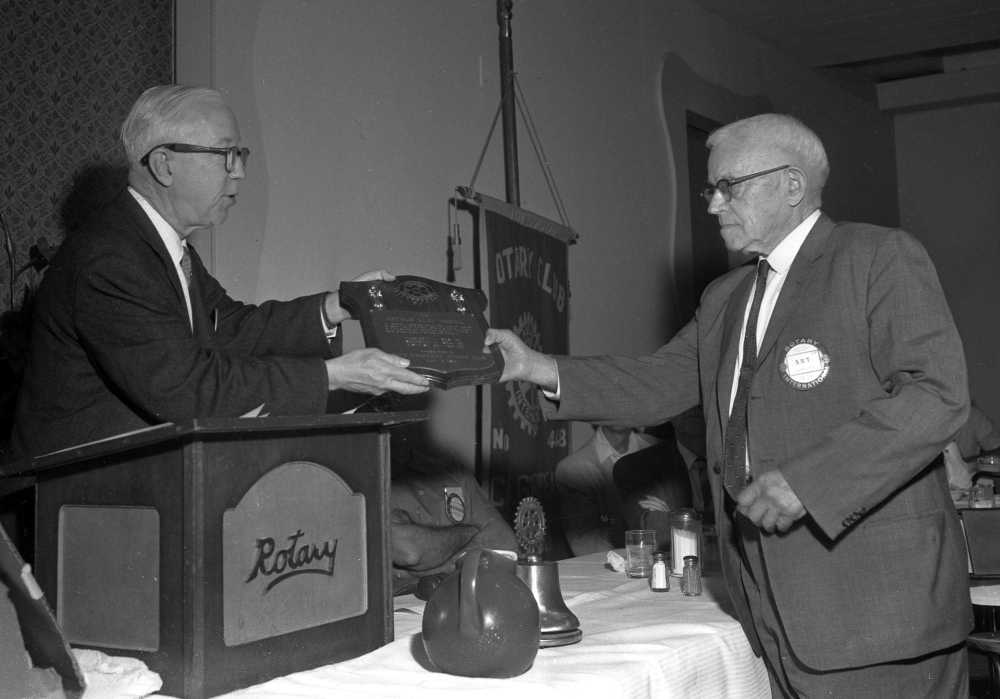 Dr. A.C. Magill, right, receives a plaque from Allen L. Oliver, in recognition of his 41 years of service to the Cape Girardeau Rotary Club. The presentation was a part of the program for "Art Magill Day" at the weekly meeting. The plaque citation recognized Dr. Magill for "his 41 years of service to Rotary and this fellow man; a humanitarian, teacher, faithful friend and devoted member of Rotary." (G.D. Fronabarger photo)

Rotarians Monday observed "Art Magill Day" in recogition of 41 years of service to the Cape Girardeau club by Dr. A.C. Magill, past head of the State College science department, former legislator and now an associate judge of the County Court.

A plaque bearing the Rotary wheel and inscribed in tribute was presented him by Allen L. Oliver, who presided at the program.

Mr. Oliver outlined Dr. Magill's accomplishments as a member of the Board of Education, City Board of Health, City Plan Commission, director of Chamber of Commerce, speaker at more than 300 high school commencements, teacher, county judge and representative.

Recognition also was given to Dr. Magill's pledge as a young man to help alleviate ravages of disease caused by impure water. During his years on the college campus he tested more than 35,000 samples of water for people throughout southeast Missouri without charge. Mr. Oliver noted that through this service, he saved hundreds of lives. His dedication to this stemmed from the deaths of two brothers and the crippling of a sister by the ravages of typhoid fever.

In response, Dr. Magill declared, "The finest thing we get out of Rotary is friends." He said he felt his shortcomings had been overlooked and, as is characteristic with friends, his good points had been overemphasized.

Individual club members joined in the recognition program with words of praise for Dr. Magill.

Magill Hall of Science at Southeast Missouri State College was dedicated in Dr. Magill's honor on his 80th birthday, Oct. 12, 1961.

Dr. Magill had come to the college in September, 1909 from Bonne Terre, Mo., where he had been principal of the high school. He had been teaching seven years at the time he joined the faculty of the Old Normal School as a chemistry professor.

After retiring from the college in 1952, he served two terms in the Missouri Legislature from 1952 to 1956. The terms were followed by three terms on the County Court, ending in 1962.

State College science and mathematics classes have completed the step-by-step move from the 58-year-old science building at the rear of Academic Hall to their modern, $1,265,373 structure to the north of the Home of the Birds.

The new building, reached by a drive from North Henderson avenue branching off from that to the home of President Mark F. Scully, solves space and laboratory problems that existed in the outgrown structure used for so many years.

It has been officially named Magill Hall of Science in recognition of Dr. A.C. Magill, now a member of the County Court, who was head of the department for many years prior to his retirement in 1952 after 43 years in the position.

State College's new Magill Hall of Science stands on a hillside overlooking the wooded ravine known to generations of students on the hilltop campus as the Home of the Birds.