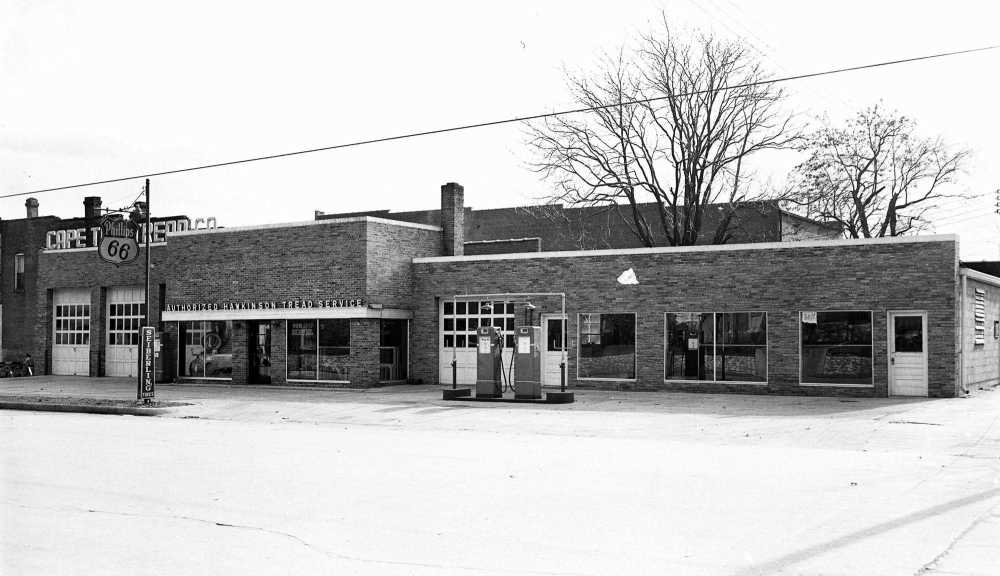 Cape Tire Tread Co. is shown in this undated photo by G.D. Fronabarger. The business was located at 201-03 South Sprigg at William street. The photo shows the portion fronting William street.

Razing of an old two-story brick structure at the southwest corner of the Sprigg-William streets intersection has been started by the Gerhardt Construction Co. for the Cape Tire Tread Co., which contemplates erection of a large commercial structure on the site. The company acquired the site, 50 by 180 feet, two years ago from J.J. Wheling of Chaffee.

The building will have a frontage of 50 feet on Sprigg street and a depth of 127 feet along William street, a portion of which will be two stories high, and an additional auxiliary structure as a turning plant, 30 by 32 feet, is included in the project. All the structures will be of brick construction, according to Wm. B. Mitchell, of the tire firm. A city permit calls for the expenditure of $15,000.

The building being razed has been occupied by one family and at one time housed offices of the late Dr. John D. Porterfield.

A year later, a story in the May 14, 1947 Southeast Missourian reported a one-story addition to the structure would be put up by the Cape Tire Tread Co. at 203 South Sprigg street at a cost of $3000.

Before moving to its new location, this advertisement appeared in the Nov. 28, 1944 Southeast Missourian:

There are only two kinds--the patented Hawkinson Tread and all the rest.

The patented Hawkinson Tread is different. The only system of treading that treads your tire in the rolling radius without heating the tire.

We can Hawkinson Tread and Vulcanize all popular size passenger and truck tires.

All work guaranteed. It will pay you to pay us a visit.