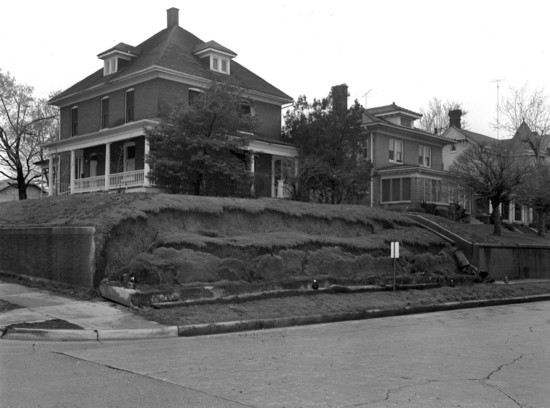 This might have been "earth-shaking" news. When a retaining wall collapsed at Morgan Oak and Spanish streets, G.D. Fronabarger recorded the scene with his camera. Here is the caption:

Wet weather slide. The concrete retaining wall and a portion of the terrace at the dwelling of Mr. and Mrs. Fieldon M. Miller, 343 South Spanish street, slid onto the sidewalk during the heavy rain Sunday, blocking the sidewalk and doing extensive damage to the lawn. (G.D. Fronabarger photo)

Below is the current scene with the wall replaced.

When a retaining wall fell in 1927, it was front-page news. Read the story below: 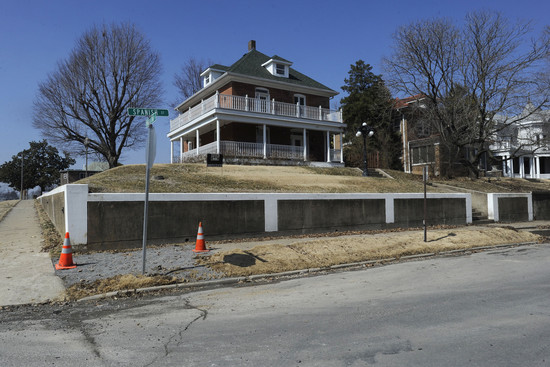 Retaining Structure Comes Down With Crash During Rain

In an effort to make certain that no one lost their life in the collapse of the Independence street retaining wall at Fountain street today, City Commissioner A. F. Meystedt asked The Missourian this afternoon to call on parents of all pupils attending Lorimier school to advise him at once in case the children did not return home soon after school was dismissed. Several children were absent from school today, presumably because of the rain, and an absolute check could not be made. If any children from that school fail to return home at the usual hour, parents are asked to call Commissioner Meystedt.

The wall, which had an average height of 15 feet, had been leaning for some time. The Fountain street side of the wall is yet intact. A continued caving of the bank would cause the two-story brick house, occupying the site, to topple. The building has been vacant for sometime.

Mr. and Mrs. E.E. Vogelsanger, who live at 316 Independence street, said the fall of the wall had the effect of a blast, making a very loud report and shaking their house. Teachers on the opposite side of the street, reported a sensation similar to that felt from an earthquake, but the pupils were not alarmed, thinking it was heavy thunder. Later they were allowed to go to the windows and view the debris and were instructed to keep off that section of Independence street.

Police issued a warning for pedestrians to avoid the north side of the street. Traffic will continue on Independence street between Lorimier and Fountain streets, barring further developments. Efforts will be made immediately to clean up the debris of the fallen wall, according to city officials.