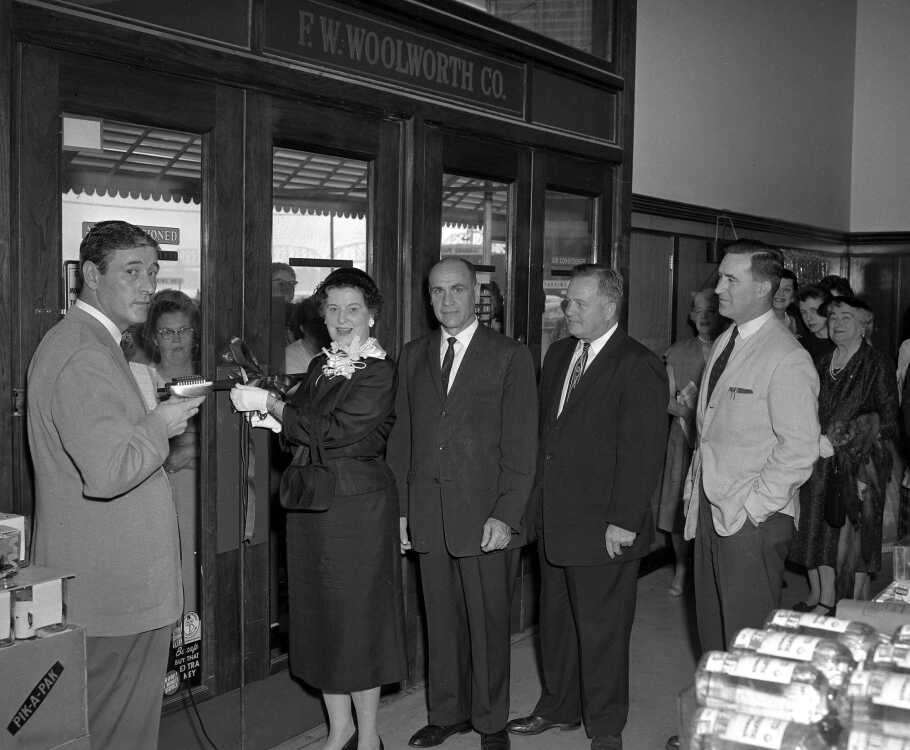 This unpublished photo by G.D. Fronabarger shows a ribbon cutting at the downtown Woolworth's store on Oct. 8, 1959 in Cape Girardeau with Mayor Walter H. Ford, second from the right. Here is the story published in The Southeast Missourian that day:

Mayor Walter H. Ford clipped a ribbon across the Main street entrance to the F.W. Woolworth store this forenoon to formally open a three-day observance of the firm's 80th birthday in its newly remodeled Cape Girardeau quarters.

Fresh merchandise, displayed in easy self-service style, was on hand for the first shoppers in the colorful, block-long retail outlet. Conveniently located check-out counters were on the floor to help shoppers with their purchases.

Manager W.R. Thornton and company officials had as their guests for breakfast at the store's restaurant section a number of city officials and business men this forenoon. They were given a preview look at the remodeled store and its merchandise.

In the ribbon cutting ceremony, brief remarks were made by Mayor Walter H. Ford and Philip Kearney, secretary-manager of the Chamber of Commerce, Mr. Thornton and Mrs. Evelyn Marshall of Poplar Bluff, whose brother Loren A. Chenue, formerly of Cape Girardeau, is a buyer in the company's New York offices.

Editor's note: Judi Naeter identified the man on the far left with the microphone as her father, Merle Emery, who worked with KFVS-TV. Philip Kearney with the chamber of commerce is standing on the right side next to Mayor Ford.

Cape Store Has Served Many A Customer Since 1914 Start

Grand Opening celebrations are nothing new for the local Woolworth store. The Woolworth story in Cape Girardeau has been one of constant expansion and growth.

It all began back in 1894, when F.W. Woolworth started his business in Watertown, N.Y. His total capital was $300. From these modest beginnings has grown the largest chain of stores of this type in the country.

Cape's first Woolworth store opened June 12, 1914. "Nothing over 10 cents will be presented," their ad in The Southeast Missourian read. Even umbrellas were featured for a dime! The store was located at the site of the old Bohnsack store at 19 North Main. It was the 723rd store to be opened by Woolworth's. There are now over 3000 in the United States.

Woolworth's moved to the present location in 1950. The block-long, $150,000 store was advertised as one which "will rank high among retail stores in the State of Missouri." Air-conditioning was a new feature. And, for the first time in Cape, Woolworth's added a lunch counter.

One unusual thing about Woolworth merchandise in 1950 was the toy items featured. The big items in those days were dolls, demitasse sets, fire trucks and train sets. Not a space helmet or a six-gun in the place!

This week's grand opening, under the direction of the present manager, W.R. Thornton, is another step in Woolworth's always-growing, always-improving program in Cape Girardeau.