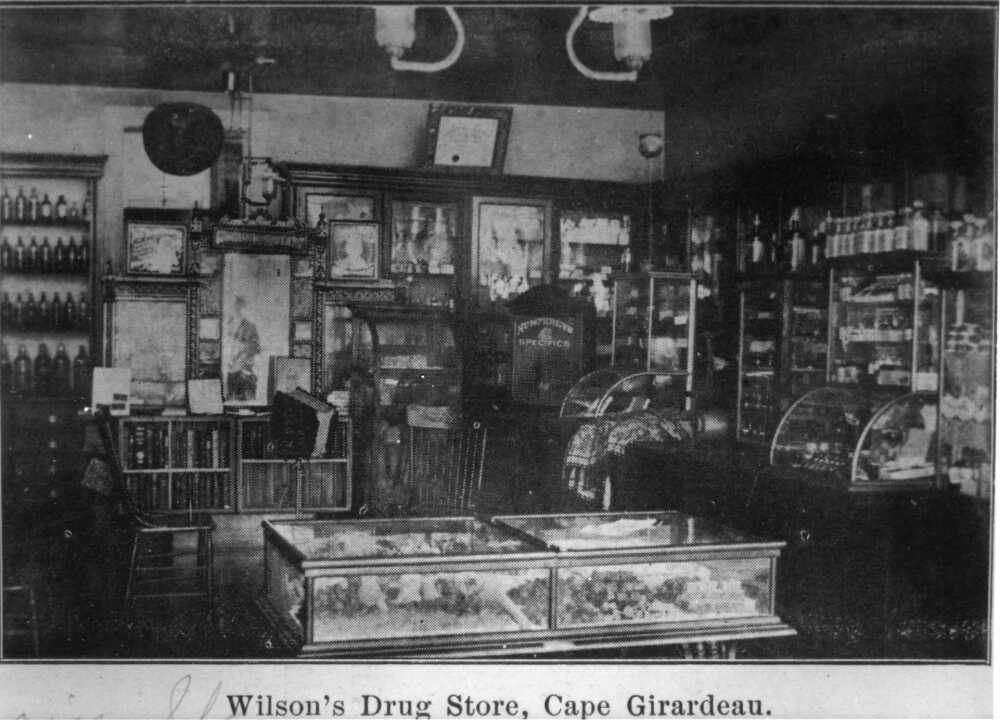 Retiring after being in the drug business since 1880, J. Maple Wilson, who just a few days ago sold his drug store at 1236 North Main street, has the philosophy of life that a man is as old as he seems. This comes from a man who is standing in the shadow of the three-quarter century mark, spending 59 years of that time as a druggist, dairyman and relief worker.

Back in the days when Cape Girardeau didn't extend beyond Pacific street, Mr. Wilson went to work for his father in a drug store on Main street, known as Wilson & Co., where the Siebert shoe store is now located. Mr. Wilson's father, Dr. Wm. B. Wilson, was then one of the community's leading physicians, have started his practice here in 1852 and continuing it until his death in 1900....

Mr. Wilson said that shortly after going to work for his father the store was moved on up the street a few doors to the site of the former Vogelsanger hardware store, the building now being occupied by the Batten furniture store. He could not recall when his father started the store.

Not long after that first change, however, Dr. Wilson decided to sell his drug business and devote his time chiefly to his professional practice and rest. J. Maple Wilson was interested in taking over the family business, so together with I. Ben Miller in 1889 the two men bought Dr. Wilson out.

When Mr. Wilson and I. Ben Miller bought the drug store from Dr. Wilson they thought a change of location might do the business good. So the store was moved across the street to the present location of the First National Bank. Here it flourished for 15 years, until 1904.

At that time I. Ben Miller had ideas for himself and started his own store. Mr. Wilson sold the building to the First National Bank and moved one door south to the present location of the Sweet Shop.

At this place Mr. Wilson sold drugs for three years and then quit the business entirely. The reason was due to broken health, he explained.

Back to First Interest

New interests came to his attention as he recuperated from his breakdown, among them being dairy farming. For some years he engaged in this business, not restricting his livestock interest entirely to Jerseys. However, dairying was his chief interest, and Mr. Wilson operated the Springlawn Farm on the Bloomfield Road until 1917. Springlawn Farm was located opposite the Burroughs place, a quarter of a mile east of Highway 61 now, but then far from town.

In 1917 when America entered the World War, Mr. Wilson sold his dairy business and engaged in relief work in all parts of southeast Missouri. This work he kept up for some years, until one day he realized that the business of his first calling was beckoning.

So in 1924, with the Red Star suburb rapidly growing, Mr. Wilson built the Wilson drug store building on North Main street and has operated the store for 15 years. He has also become an expert dispenser of fountain drinks.

In this previous blog, a circus proceeds past Wilson's Drug Store at 115 N. Main: