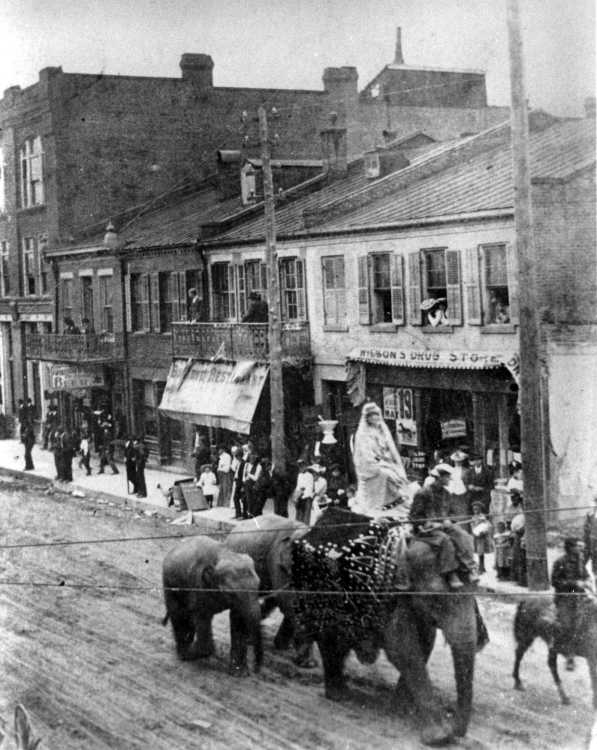 Circus Day was one of the most important events of the year in old Cape Girardeau. A circus parade on Main Street preceded the show in the big tent in the Donnybrook neighborhood, a small Irish enclave on North Main Street in the vicinity of where the International Shoe Company factory would later be built.

This picture was made circa 1895-1900. The circus tent was erected on the site later occupied by the shoe factory.

The buildings are along the west side of Main Street. The Sturdivant Bank is on the far left side. Next to the bank, the two small buildings would later be bought by Louis Hecht and demolished in 1927 for construction of Hecht's store. At the time of the circus, McClatchey Saloon occupied 105 N. Main with the Diamond Cafe at 107.

A column by Katherine Cochran in the June 25, 1987 Southeast Missourian describes Circus Day. Here is an excerpt from The River City of Cape Girardeau and Its Environs:

Early publications in this area printed advertisements announcing the arrival of circus groups so as to generate interest. Tickets were reasonable. The parade was free, and was a great drawing card. It usually took place in the morning or early afternoon. The crowd followed the parade back to the circus grounds, and took in the side shows until performance time began in the afternoon.

The nickel and the penny as well as the two and three cent piece, during the last century, purchased much pleasure for spectators on the circus grounds. Today prices for everything connected to a circus are much higher.

Sells Circus was one of the oldest and largest of the early touring groups. They came to Cape May 8, 1895. They would return several times in later years. In 1895, they traveled on a riverboat. The boats did not travel at night, that was too dangerous....

Sells Circus returned with Adam Forepaugh, again on May 8, 1905. The account of the circus arriving, on the Frisco Railroad, was described in the paper. The Frisco had been extended to Cape from St. Louis, in 1904, to enable the local residents to attend the St. Louis World's Fair, 1904....

Heavy rain prior to the Circus Day prevented the troop from using the usual circus grounds on North Main, where the International Shoe Company was later built, and new grounds in south Cape were engaged and reached from south Frederick. Although the article did not say, this large space was probably the old Union Camp Grounds because old St. Francis Hospital did not break ground on Good Hope until Aug. 26, 1913.

The circus parade did not take place until the next day. Everyone seemed to have a good time, and the circus returned again in 1907. The dining tent was erected on south Frederick, and mention is made of large trees that gave shade and this was appreciated.

Circus troops found Cape Girardeau and the southeastern part of Missouri receptive to circus entertainment. The troops stopped either going north in early spring, or returning in the fall on their way south to their winter quarters.

The circus sent to New York for a camel doctor, who tried his magic to cure the camel, but the camel died. The doctor was very upset, and disappeared in fright. Ringling returned many times, and then as Ringling, Barnum and Bailey.

Cape gets its Irish up in Donnybrook

Never a people to be overlooked, the Irish have a way of making their presence known.

Even in predominantly German Cape Girardeau, the Irish were able to make their mark, leaving as their legacy the Donnybrook neighborhood, a small Irish enclave on North Main Street near the old shoe factory.

The Irish didn't stick around Donnybrook for long. The earliest references to Irish in the neighborhood date from end of the 19th century, and the latest to about 1910.

"Then it just vanished," said Judith Crow, a Cape Girardeau journalist and historian.

Details about the neighborhood's early history are scarce, Crow said.

"I've looked for 40 years and there's occasional mention of it," she said. "It was a little strip in there that was occupied mainly by Irish people, but I've never been able to verify the boundaries."

As the name might suggest, Donnybrook could be a wide open kind of place under the Irish regime.

"Cape Girardeau: Biography of a City," by Felix Eugene Snider and Earl August Collins, refers to "the rough and tumble fun of Donnybrook" with its local carnivals and festivals featuring shooting contests, wrestling, weightlifting, races and jumping contests.

Later, an Irishman named Mike Miggins became known as the mayor of Donnybrook.

A plumber-pipe fitter by trade, Miggins reportedly got roaring drunk every Saturday night and came home swinging at everyone and everything in sight.

Sober, he was apparently a model citizen. The 1906 city directory lists Miggins as being a street commissioner who lived at 8 N. Main St.

The Irish may have descended on Cape Girardeau to find jobs in the city's foundries and factories, then moved on, following the railroad and the river to new jobs.

Howard Tooke, a former mayor of Cape Girardeau, grew up in Donnybrook in the 1920s and '30s, after the Irish had moved on.

"My family moved to Donnybrook when I was four years old, which would have been 1922," said Tooke, who is now 78.

Tooke's uncle, C.L. Williams, owned and operated the North End Market at the corner of Spanish and Mason.

"It went broke in the Depression," Tooke said, and his uncle, who was then 70, signed on to work at the shoe factory, "and worked there for 10 or 15 years."

Donnybrook was mostly blue collar and largely populated by workers from the shoe factory, Tooke said.

The shoe factory didn't pay the highest wages in town, he said, but it was steady work.

"The shoe factory ran all through the Depression. It never shut down," he said.

Donnybrook was home to "some pretty tough kids," Tooke said, but overall it was "a decent, hard-working neighborhood. Everybody was poor, so nobody was poor."

Millions of Irish, escaping famine and oppression at home, came in waves to the United States during the 1800s and through the beginning of this century.

Locally, St. Vincent's Seminary was a big draw for the Irish-born, said Dr. Michael Roark, a health and leisure professor at the university.

"The Irish were involved in the development of that institution," Roark said. "The Catholic church in Cape had a big help from that source."

There was "no major settlement" of Irish in the region, although the Scotch-Irish moved into the region "in the very beginning of the settlement" at Cape Girardeau, Roark said.

"Culturally, they were more Scottish than Irish," he added.

The Irish tended not to hang around rural areas too long, Roark said.

"The Irish were often more mobile than any other ethnic group," he said. "That particularly had to do with the kinds of jobs they had. They often did construction work, most famously the railroad."

Others say it was the section between the old International shoe factory and the Red Star District.

Another simply positions Donnybrook near the old shoe factory, which was near the corner of North Main Street and Big Bend Road.

Only two or three Irish families reportedly were living there in 1905, and the distinction has long since faded away.

St. Patrick's Day is Being Observed by Electing a Mayor

St. Patrick's day is being observed in Donnybrook in the usual fashion. For the twenty-first time a mayor is being elected and the campaign that is closing has been one of the most spirited on record.

Peter Carroll has held the exalted position for twenty years and has had little opposition, but this time W.J. Seagraves is making him a race that will be remembered.

Up to 3:30 this afternoon Mr. Carroll had seen every lady in the district except one and claims their support, while Mr. Seagraves has appealed to the old folks and babies. He offers to bet a thousand to one that he will win.

There has been a hot time and a conspicuous wearing of the green in Donnybrook today.

(Editor's note: We doubt this was an actual election.)

Mud stages for the city include the Donnybrook area, along Main street north from Broadway to Sloan's Creek, no bottom.