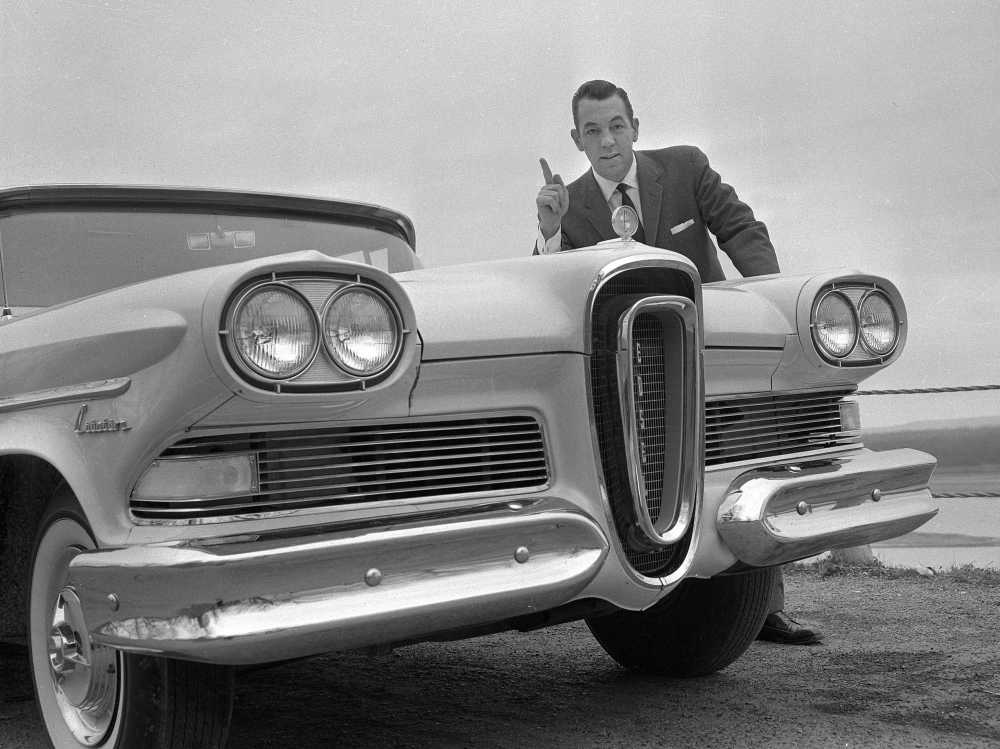 Given Franchise for New Edsel Car

Franchise for the new Edsel motor car in the Cape Girardeau district has been given the Edgewater Motors, Inc., it was learned today. The new car, made by the Edsel Division of the Ford Motor Co., will be introduced nationally Sept. 4.

Actively identified with the Edgewater Corporation, a new organization, are Wm. L. Brune, secretary-treasurer and operating dealer, and Ray Zimmerman, now of Washington, Ill., vice president and in charge of parts and service.

Temporarily the agency will be in the former Kaiser-Fraser location on Kingshighway, but about Dec. 1 will move to 1031 Broadway to occupy a new building being erected by Eddie Erlbacher.

Mr. Brune, in the automotive field for six years, formerly was with the Buick and Oldsmobile sales staff. Son of Mr. and Mrs. Henry Brune, he is 33 years old, is a graduate of Central High School and attended State College. During the war he served four years in the Army Quartermaster Corps, being in charge of a truck company, and was separated with the rank of first lieutenant. He has been a member of the American Legion for 11 years and was a member and drum major of the Legion Drum Corps.

Mr. Zimmerman, 28, attended the University of Kentucky and was graduated from Bradley University at Peoria, Ill., after which he coached athletics and taught school. During the war he was in the Strategic Air Command and was separated from service as a first lieutenant. He and his wife and two daughters are preparing to move to Cape Girardeau.

Van Goodwin announced today that his company, the Goodwin Motor Co., 1415 Independence, has been appointed dealer for the Edsel motor car in the Cape Girardeau area. He said the appointment was in line with general Ford policy of consolidating Lincoln, Mercury and Edsel in a single dealership. Mr. Goodwin has had the Lincoln and Mercury agencies for six years.

Wm. Brune of Edgewater Motor said his company voluntarily terminated the Edsel sales agreement, and the Ford Motor Co. is buying its Edsel parts and special equipment. Edgewater Motors, owned by Mr. Brune and Douglas Stallings, has had the Edsel agency since August, 1957. Mr. Brune said the company will retain the agency for the smaller Renault car and will add other imported models. The agency will maintain headquarters, with complete shop facilities, at 1105 Broadway.