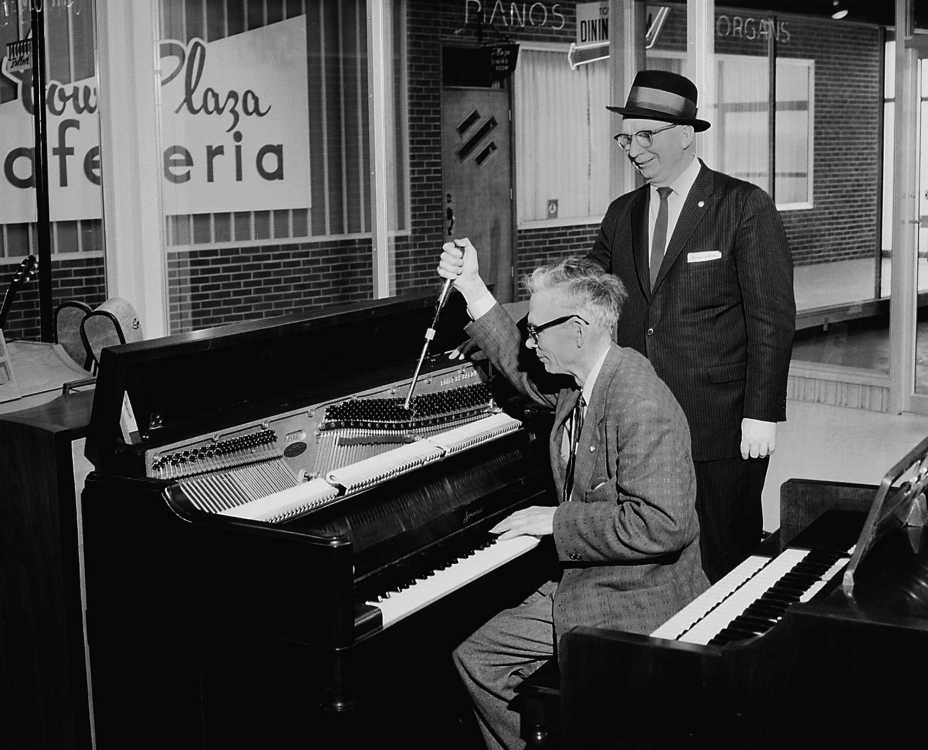 George Slocum, a piano technician and teacher in the Cape Girardeau area for 40 years, is shown with Thad Bullock, standing, owner of Bullock Piano Salon in the Town Plaza. G.D. Fronabarger made the photo, probably made in the early 1960s.

The Southeast Missourian published a story on Aug. 4, 1972 in which Slocum recalled the baby Mo-Mo roaming his farm near Fredericktown, Mo. in the late 1940s.

Is Mo-Mo descendant of five-toed monster sighted in Fredericktown in '40s?

Mo-Mo could be mo' of the same old family--a descendant of three foul-smelling, long-armed Missouri monsters that stalked the hills and dales around Fredericktown 26 years ago.

If so, he, she or it has lost two toes in the shuffle.

George Slocum, now of Jackson, says he became almost familiar with the three creatures that threw a scare into southeast Missourians in 1946-48. The "things" practically took up residence at the Slocum farm eight miles southwest of Fredericktown.

There were at least three of the hairy beasts at that time -- apparently Mama Monster, Papa Monster and little bitty (?) Baby Monster.

Mr. Slocum says he saw them, his late wife saw them and their daughter saw them. To prove it, Mr. Slocum has a plaster of paris cast of Baby Monster's footprint. It is 4 1/2 by 6 1/2 inches in size and it has five toes.

But the hairy creature now being seen around Louisiana, Mo. is reported to have only three toes, Mr. Slocum said.

However, it's possible Baby Monster could have grown up. Or some of its relatives could have moved to Louisiana. It's a known fact that many hunters came to the Fredericktown area in hopes of adding an unusual prize to their trophy wall, but none were successful.

"I know there was a family of at least three, we could hear them call to each other. It was a high-pitched 'o-o-o-h' call, and they would answer one another," Mr. Slocum commented.

Mr. Slocum said he also found a large footprint about three or four times as big as the smaller one, but couldn't make a cast of it.

"My wife saw it walking through our chicken yard on two legs and its hands were so long they hung below the knees. It was hairy and we found some of the black hairs in the fence where it crossed over. It slept in our brooder house, because the odor was there and it was pretty strong," Mr. Slocum recalled.

His daughter also saw one of the things come out of a creek. It was on all fours and had a large tooth protruding from each side of its mouth. "She was only 12 and scared to death," he commented.

Mr. Slocum's theory is that the 1946 creatures were at least a type of what is called "Big Foot, Yeti or the abominable snowman." Webster says the latter is an animal reported as existing in the high Himalayas and usually thought to be a bear.

"A professor who studied the cast of the footprint said it is not a human print, but the joint of the second toe has human characteristics," Mr. Slocum stated.

Apparently, Mo-Mo of yesteryears "grubbed" for food and didn't bother anything on the farm. "And a strange thing was that you never found any footprints of the creatures in winter, only in summer," he said.