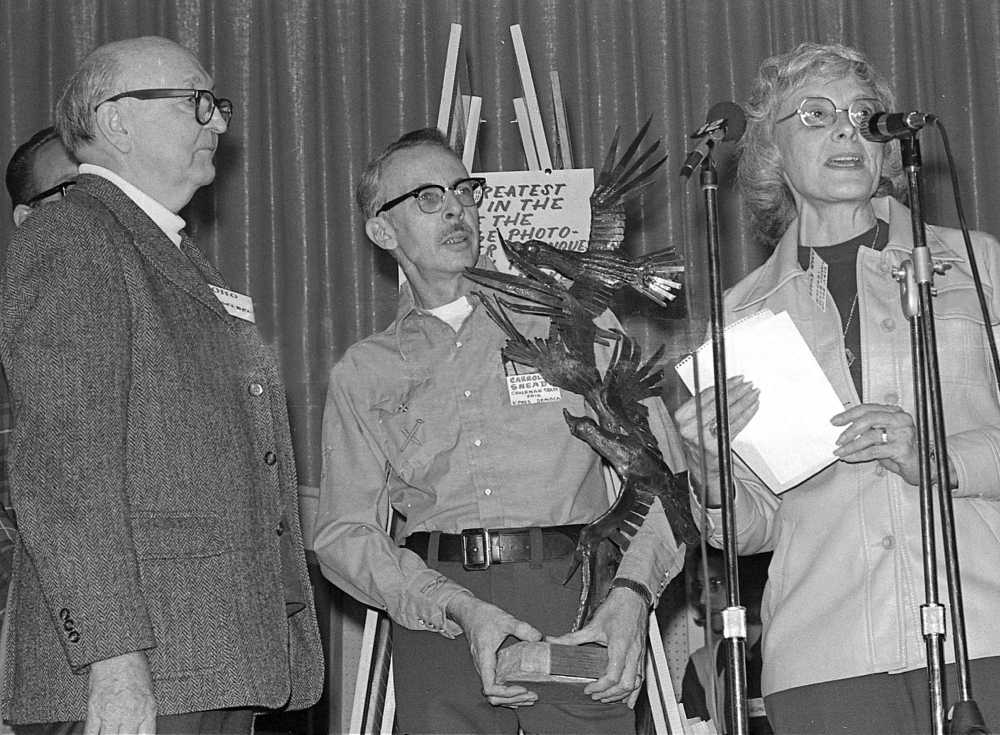 Otto F. Dingeldein, longtime Cape Girardeau metalsmith, stands at left waiting to receive the first annual Otto F. Dingeldein Award sponsored by the Southeast Missouri Council on the Arts. The initial award, a copper sculpture of three doves symbolizing local interest in the arts, is held by Carroll Snead, chairman of the fifth annual Regional Crafts Fair which attracted about 5,500 visitors over the weekend. The award was presented to Mr. Dingeldein on Sunday by Mrs. Emily Rice, right, executive director of the Missouri State Council on the Arts. (Fred Lynch photo)

A special award, a grant, a record number of exhibitors-demonstrators and a large turnout combined to make the fifth annual Regional Crafts Fair here Saturday and Sunday the largest in history.

A highlight of the fair, sponsored by the Southeast Missouri Council on the Arts, came Sunday afternoon when the man who is credited with giving arts and crafts in Cape Girardeau the boost it needed was presented a surprise award.

Otto F. Dingeldein, a nationally-known metalsmith here, was presented the first annual award named in his honor. For Mr. Dingeldein, the award took the form of a three-foot copper sculpture of three doves symbolizing his association with the arts here.

Mr. Dingeldein was overwhelmed as he was called to the Arena Building stage at mid-afternoon to receive the surprise award.

The inscription at the base of the sculpture cites Mr. Dingeldein for "sharing of knowledge in the arts." The award, from the Southeast Missouri Council on the Arts, Inc., was presented by Mrs. Emily Rice, executive director of the Missouri State Council on the Arts.

She recognized Mr. Dingeldein for proving that "devotion, motivation and commitment to the area of the arts can move mountains."

Mrs. Rice also announced that the council has been approved for a $5,000 grant from the state council. Mrs. Sharon Dow, director of the local council, said the money will finance a variety of community programs.

Approximately 5,500 persons jammed the Arena Building to view the demonstrations and exhibits of more than 200 artists and craftsmen from five states. Saturday's attendance was 2,736. The fair attracted 2,523 on Sunday, according to Carroll Snead, chairman.

Mr. and Mrs. Dingeldein founded the Christian Arts Council here in 1961. He served as director for many years and now serves the council as its program director and representative to the River America Arts Council. The metalsmith is particularly noted for his silver art work for churches.

Here is a list of recipients of the Otto F. Dingeldein Award: