Hot enough to fry an egg? 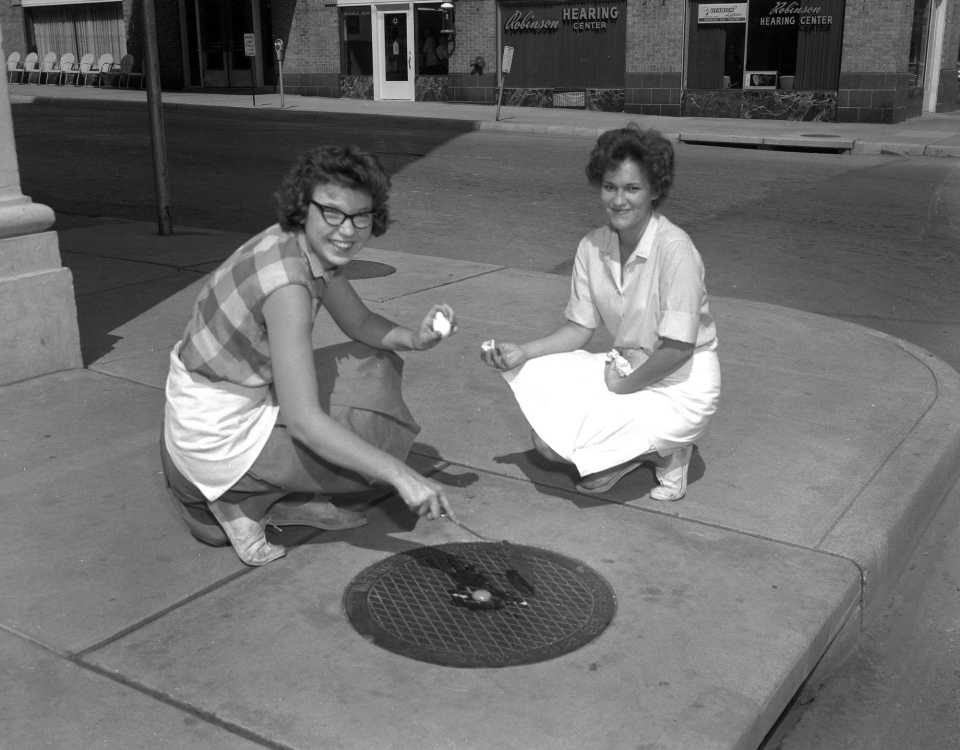 These waitresses, Miss Shirley Ackman at the left, and Mrs. Peggy Stevenson, decided Monday's sweltering temperatures, which reached 97 dgrees, had made a Broadway-Fountain street manhole cover even hotter -- enough to fry an egg. The egg and heat obliged. Monday's high humidity made the day one of the most unbearable of the hot weather. (G.D. Fronabarger photo)

Temperatures Monday afternoon as reported by the Federal Aviation Agency's Flight Service Station at Municipal Airport were 97 degrees, the high, at 4 in the afternoon and a sweltering 93 degrees at 6:00.

The continued hot weather through midnight combined with the 56 percent average humidity caused tongues to hang. People in all parts of the city could be seen sitting outside.

A spokesman at the water plant said they expect the largest usage today but had a huge 2,429,000 gallons measured in the 24-hour period ending at midnight. Water usage today may range as high as 2.7 million gallons, he said.

One business that smiles when the weather is hot is the Pure Ice Co., where officials report a 25 percent jump in sales when the temperature increases from 75 to 95 degrees.

A spokesman said ice sales really boom when a period of hot weather lasts for a week or more.

Many Cape Girardeans beat the heat with air-conditioners. At two sales companies it was said today that air-conditioning prices are progressively going down and sales are thus growing appreciably higher.

Still very much in use are window fans. One company reported a 25 percent increase in sales in all types of fans this summer.