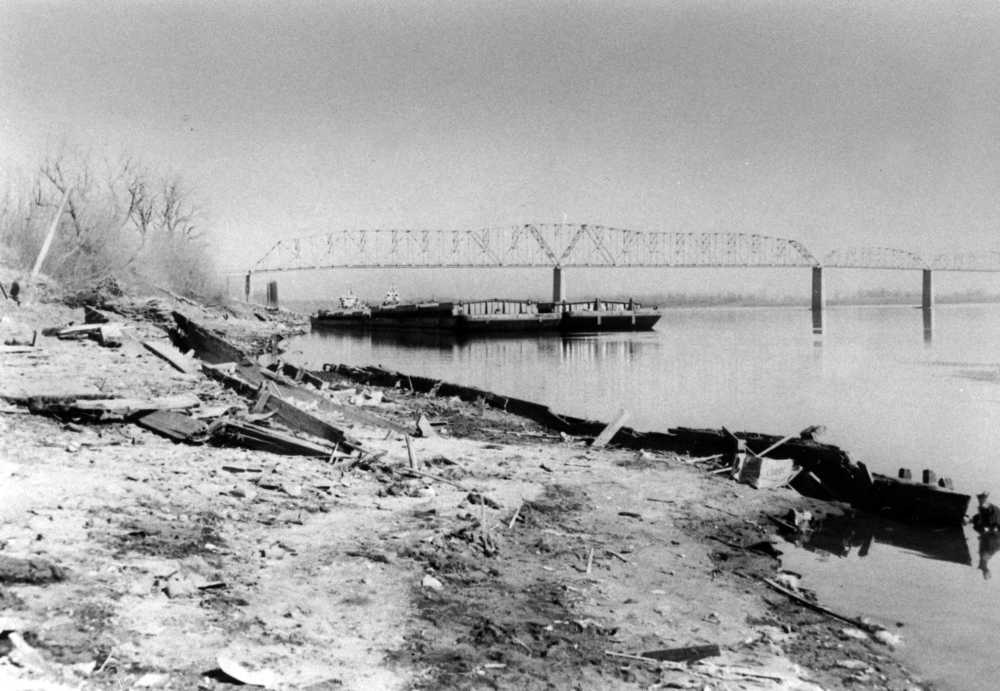 This picture taken about 1930 by Terry Alt shows the remains of the steamer Sea Bird which exploded near St. Vincent's College south of the river bridge at Cape Girardeau on Jan. 4, 1848. The riverboat was loaded with gunpowder.

According to research by Stu Beitler posted on GenDisasters.com, the following information was reported by the Cape Girardeau Eagle:

The steamer Sea Bird arrived here last Sunday morning, from New Orleans. After putting out a parcel of freight, and finding the water too low to proceed on her trip to St. Louis, she dropped down about half a mile below the landing, and tied up, intending to wait for a rise. She had a large lot of freight on board, including between eleven and twelve hundred kegs of powder.

About 3 o'clock last night there was an alarm of fire. It was soon ascertained that the Sea Bird was burning. It commenced in the ladies' cabin, and had made such headway that it was found impossible to arrest them. An attempt to scuttle her proved unsuccessful. Capt. McMurtry and some of this hands started off to apprise the citizens in the vicinity of their danger, and secure their own safety. About an hour after the fire commenced, the powder exploded, causing the most tremendous and terrific noise that was ever heard in this section of the country.

The concussion caused an almost universal jarring of houses and crashing of windows--causing many who were unacquainted with the cause, to conclude that it was a terrible earthquake, and others supposed that the day of judgement had come certain. The damage done to windows and doors of houses, in many instances is immense.

Here's more from James Baughn in his blog about Joseph Lansman, "The Man Who Built Cape Girardeau," in Pavement Ends, Dec. 28, 2012:

The Vincentians suffered two major disasters which would add to Lansman's workload. First, in 1848, the SEA BIRD, a cargo ship carrying a large quantity of gunpowder, was docked below St. Vincent's College while waiting for ice on the river to clear before proceeding to St. Louis. A fire broke out on the ship, and you can imagine what happened next.

The students had time to quit the college and to go about two miles into the country. The explosion was terrific. Every door and window in the college was dashed to pieces. The roof [was] raised some inches and then settled nearly in its former place. The plastering on all the rooms of the college was broken and thrown down. The college appeared [to] be a complete wreck.

He added, in credit to Lansman's masonry work, "The walls were so solid that the shock had not the least effect on them."

Lansman was called to oversee repairs.