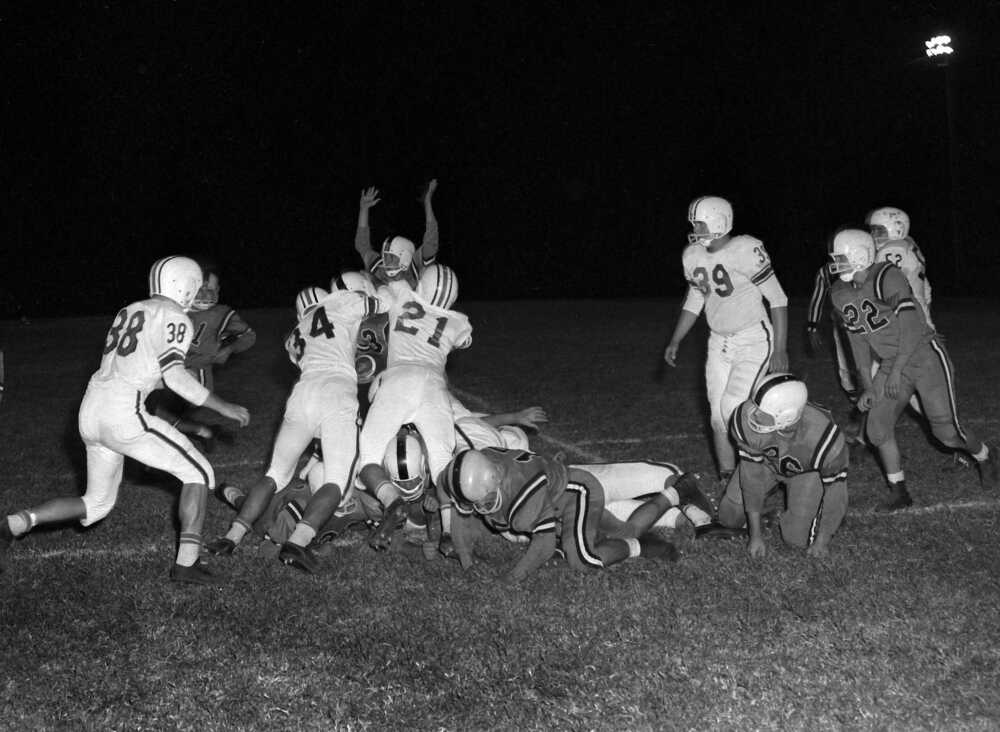 Central High School was off and running early in the game as halfback Floyd King plunges for the first Tiger touchdown, enroute to a smashing 33-14 victory over Jackson Friday night. He is shown between Jackson's Jerry Lacey (34) and Fred Jones (21), who couldn't stop him. Rushing up to meet the play are Tony Kirn ((38) and Frank Milde (39). Identified Central players are Jim Rust (26) on his knees right and Walt Vandivort (22). (G.D. Fronabarger photo)

If a poll could be taken among high school football observers to rate the best team in southeast Missouri, Central of Cape Girardeau would most certainly end up near the top -- if not the top.

The Tigers made believers out of the doubtful Friday night at Houck Stadium as they rolled past Jackson, the team that was expected by some to be their downfall. But when the dust had cleared Central had frolicked home, 33-14, and added Jackson to its list of outclassed victims.

The local team won the game where most football games are won--at the line of scrimmage. Their big, mobile line dominated things throughout, often jamming up Indian runners for no gain and at the same time, clearing holes for Tiger backs.

With close to 5000 fans looking on, Central riddled Jackson's vaunted defense badly, and scored in every quarter. The Tigers ran and passed for 310 total yards and for the fourth straight game, scored five touchdowns or better.

The game was a real donnybrook all the way, even though the score was lopsided in Central's favor. Not until early in the fourth quarter did the Tigers really put the game on ice.

At that point, junior tackle John Ramey had a scoring thrill that doesn't come often for a lineman. He plucked a Jackson pass out of the air and galloped to the goal line, some 20 yards away, to put the local team safely in the lead, 26-7. A run for the extra point failed.

The following kickoff return gave Jackson fans renewed hope, as quarterback Fred Jones took the ball deep in his own territory, cut up the field to his left, then cut back to the right to find daylight and carry all the way--some 90 yards--for a touchdown.

Jones himself carried the ball over for the extra point, and with 8:12 left in the game, the score stood: Central, 26; Jackson, 14.

At this point, Jackson's fans, well-represented in the stands, were hoping for a miracle. But the Tigers took the kickoff and marched steadily down the field in seven plays to chalk up the game's last score.

Vicious blocking and tackling, as well as scoring, was one of the features of this contest, played on a dry field in perfect football weather.

Central scored first, moving from its own 36-yard line after an exchange of punts in the first quarter. The big gainer in this drive came on a pass from quarterback Chris Collie, who called a confident game all evening.

Collie rolled out, shot a pass into Jackson's secondary and Floyd King grabbed it on about Jackson's 45. Several unidentified Tiger linemen accompanied the big halfback with timely blocks, and King tight-roped the north sidelines before being downed on the Indian 10.

King burst over from the 2-yard line to cap a seven-play march. The score was 7-0 with 3:50 remaining in the quarter as end Mark Headrick kicked the point.

Jackson tied the contest with 10:40 left in the second quarter. In five plays, the Indians moved from the Central 17-yard line with Adolph Sokolowski going over from the 2-yard line. He also ran the extra point.

Central's big fullback, Paul Banks, made a herculean effort in scoring his team's second touchdown when he shook loose of tacklers past the line of scrimmage, and sprinted into the end zone from 28 yards out, ending a six-play drive.

The Tigers kicked off to Jackson and fans gasped as King came out of nowhere to blast halfback Larry Lewis to the ground with a necktie tackle.

The Tigers held and Jackson punted to the Central 35-yard line. With halfback Joe Metje and King doing most of the carrying, the Cape Girardeau team moved the ball to Jackson's 4-yard line. Another pass from Collie to King, covering 33 yards, was the big gainer.

Jackson's Sokolowski and guard Jim Sander met King head-on at the 4-yard line as he tried to score on fourth down.

A partially blocked punt set up Central's third touchdown in the third quarter. Starting from their own 48, the Tigers moved downfield in nine plays, featuring the mixed-play calling of Collie.

King took an 8-yard pitch from Collie to make the score, 20-7, with 4:39 left in the third quarter. King's run failed in the point try.

Central's last marker came when Collie plunged over from about one yard out. This touchdown followed a long Central drive, helped at the start by a nifty 28-yard kickoff return by King to Jackson's 47. King also took a Collie pass on the visitor's 35 and ran about 10 more to the 25, to keep the drive moving. King made the extra point.

King ran for 35 yards in the game and caught four passes for 98 yards. Jackson's Sokolowski ran for 43 yards and threw Jackson's only completed pass for 7 yards.