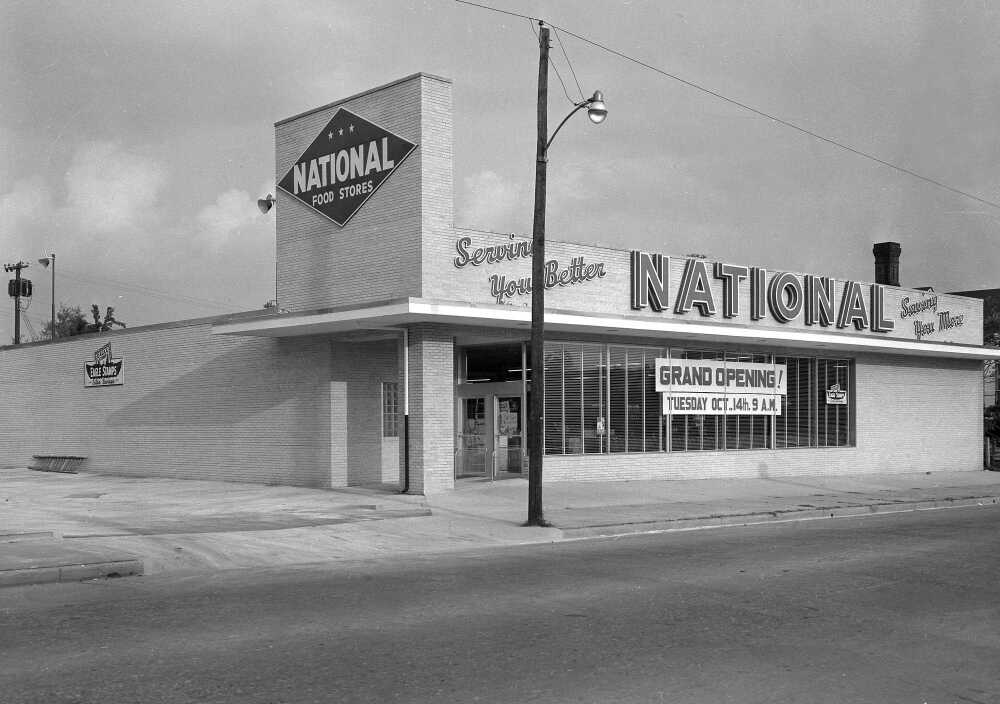 Food Store to Open Tuesday in New Building on Sprigg

Formal opening of the new National Food Store, Cape's latest supermarket, located at Sprigg and William, will be held at 9 Tuesday morning. A ribbon-cutting ceremony is to open the formalities and will be followed by talks by Sen. A.M. Spradling Jr. and several representatives from the home office of the company in St. Louis.

Of modern design, the building is constructed of buff-colored brick and contains 12,600 square feet, most of which is devoted to sales area. Flush spotlights are built into the full-length canopy across the front to light up the sidewalk. All doors are fully automatic.

The interior is decorated in crushed strawberry and a medium shade of green with the back wall over the meat department mirrored to give an illusion of greater depth. Wide shopping aisles in the sales area are identified by Hopp-Press markers which permit fast and easy selection. The floors are of off-white and pastel green vinyl tile with a ceiling of plaster. Full-length strip fluorescent lights are used and an office is included in the store layout.

There will be five automatic and one manual checkout counters conveniently arranged for speedy service. Large shopping buggies with "baby seats" are to be provided customers. In the out-of-the-ordinary departments are health and beauty needs and a tot's ready-to-wear department.

Parking space for over 80 cars has been provided on a lot blacktopped for all-weather use. It will be illuminated with mercury vapor lights. Owner and builder of the building is Burton J. Gerhardt.

Herschel Bays, formerly assistant manager at the store in Centralia, Ill., has been named manager. He and his wife and daughter, Jo Deane, 12 are residing at 608 Maple. Herbert Forrester, originally of Charleston, is to be assistant manager and Sam Gunter, a local resident, will head the meat department.

[National Food Store opened in 1958 at Sprigg and William streets in Cape Girardeau. In 1970, the store was renamed Del-Farm, a part of the National Grocery chain. It became Schnucks Midtown in 1995 after National sold its stores to Schnucks Markets. In 1999, it became Sav-A-Lot when Cape Girardeau's two Save-A-Lot stores closed at 396 N. Kingshighway and 19 N. Spanish.]