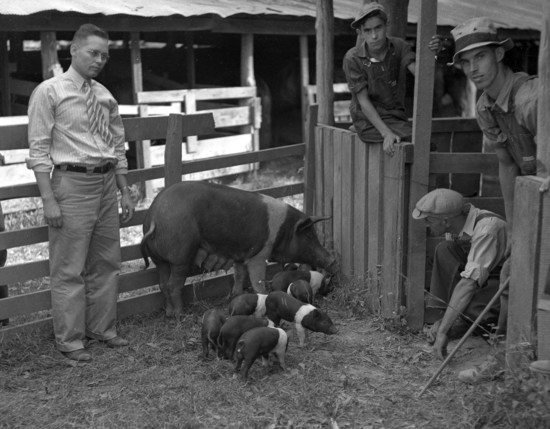 Judges had a job on their hands when they picked the champions in the livestock show at the 10th annual Bollinger County Fair in Marble Hill. About 300 head of livestock are on exhibition. County Agent Harold Lemar of Bollinger County is shown with his prize Hampshire sow and litter of nine pigs. 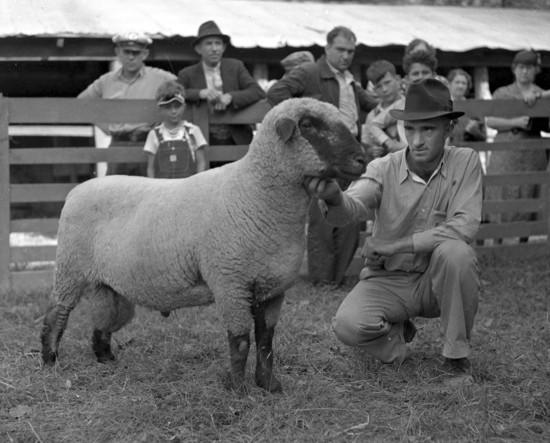 Floyd Lutes of near Lutesville is with the grand champion Hampshire ram at the 10th annual Bollinger County Fair at Twin City Park, between Marble Hill and Lutesville. (G.D. Fronabarger photos)

Marble Hill, Sept. 16--The tenth annual Bollinger County Fair opened at Twin City Park Thursday with the greatest exhibition of livestock ever held in the county. Approximately 300 head were shown by Bollinger County farmers and stockmen, the show being confined to local producers. In addition there was a sizable exhibition of poultry and pets.

Some exceptionally fine livestock was brought to the fair, giving visitors a concrete conception of the county's growing importance as a livestock producing area. Horses, mules, hogs, cattle and sheep were there in quantity. Those in charge of the fair said that fully three times as much stock is on hand this year as in former years.

The fair will end Saturday after a 3-day program. Thursday was officially designated as livestock day, but the exhibits will remain through the week. Today was school day, and Saturday will be devoted to various entertainment features and contests....

The feature of today's program was a parade of the Bollinger County school children in the afternoon, in which 600 to 700 children were to take part. After the parade a massed chorus of 300 school children was to sing on the fair grounds. The Lutesville high school band was also scheduled for a concert. This was to be followed by an amateur program with Kenneth Williams of Patton in charge. Schools over the county are supplying the contestants and the program consisted of stunts, songs and dances. The day's program was to close with high school casts presenting one-act plays.