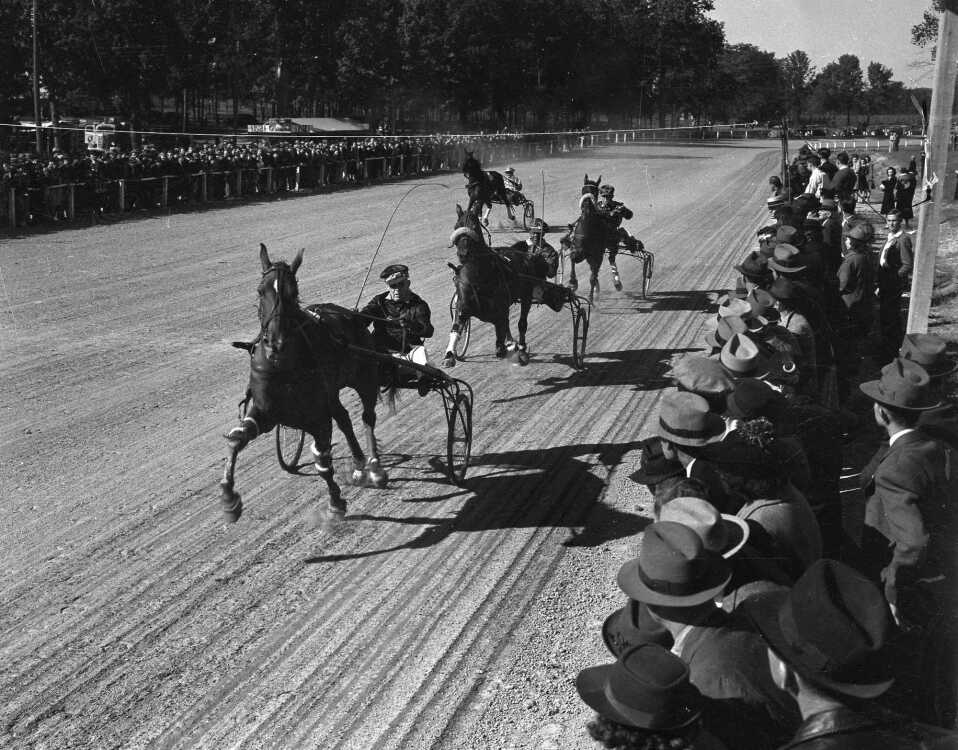 Hundreds of people lined the track to see horse racing at the re-opening of the SEMO District Fair in 1940. It was the first year for the fair at the new Arena Park. The last fair in Cape Girardeau was in 1929.

Fair to be Revived in Girardeau Next Week

First Public Use of Park, Long a Dream

A modern fairground plant somewhere at the edge of Cape Girardeau, a dream in the minds of a handful of Girardeans five years ago, today is a reality, and, located at the very doorstep of the city, is already a part of Cape Girardeau. Fostered and sponsored by this community, the park, owned by the city, is fast becoming a southeast Missouri center. A few preliminary meetings in the sweeping auditorium have served to demonstrate how well the new fairground plant fills a need in this part of the state.

How completely the fairground will meet requirements as a spot at which to conduct a district-wide fair will soon be demonstrated--with the Southeast Missouri District Fair to open there on the coming Tuesday, Sept. 24. Some had predicted the ground space and the massive Arena Building were larger than would be needed, but there are already indications that the exhibits and the crowds to be attracted may--the first year--tax the available space.

The park, so far as the fair plant is concerned, is all but completed. There is much yet to be done, before another year rolls by, as community leaders learn more of the specific needs, but the park, the drives, the racetrack and the building are 100 per cent ready for use.

Substantial and attractive fencing is yet to be built, a highly attractive entrance is being planned and a set of permanent barns is to be built after the 1940 fair. In past weeks, with all hands bent on the task of making ready for this year's fair, a fence has been built around the interior and the exterior of the half-mile race track. Final terrace and driveway work has been done and additional chat hauled in. This summer the city, WPA and Cape Special Road District built a high type main drive from Highway 61 to the Arena, with a wide areaway in front of the building, where the floral hall exhibits will be shown.

So far $275,000 has gone into the park and its development. The Junior Chamber of Comerce fostered the idea in the primary stages and the city has put up the sponsor's share of costs. The government, through the WPA, using the park project as a three-year employment-giving job, has put in the balance in labor and materials.

The WPA at first set aside $200,000 for the project, the largest of its kind in Missouri, and carried along with that allotment for 2 1/2 years, having as high as 120 men at the park at times, with the force dwindling to 20 or 30 at other periods.

This summer the original sum was used up, and, pending formal approval of a new release, which came through in August, there was nothing done in the big park. In recent weeks, under the added $25,000 project, the track finishing and other work has been done.

Cape's arch that never was