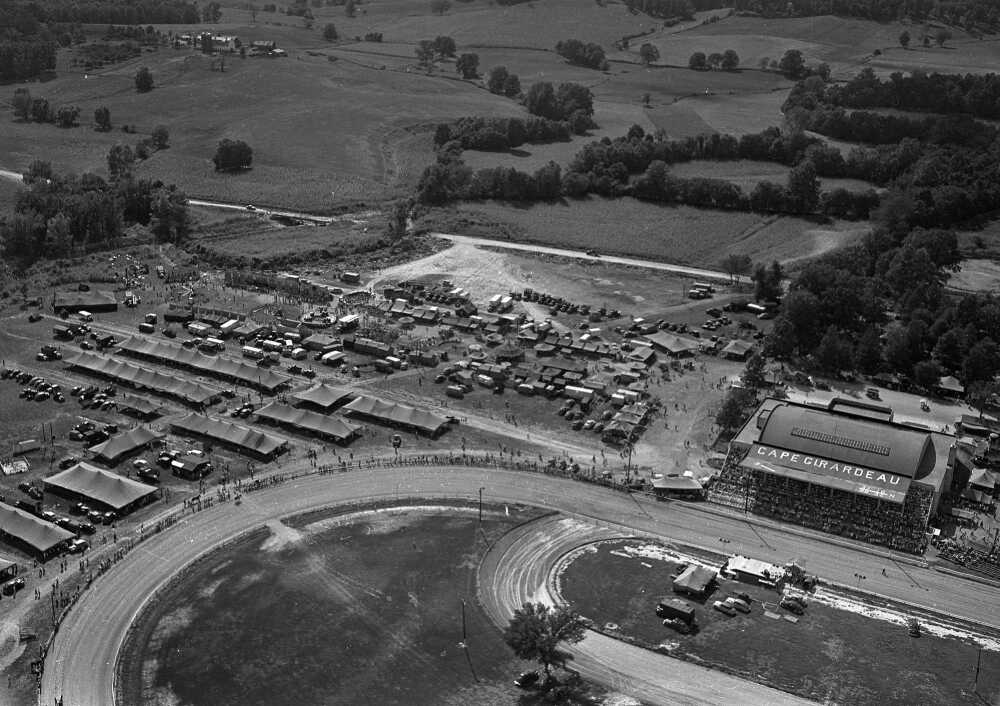 This undated photo of the SEMO District Fair was probably made in the 1940s by G.D. Fronabarger.

The Schonhoff dairy farm can be seen in the upper left corner of the picture.

Note the air marker painted on the roof of the grandstand.

Richness of a historical background, with all of the tradition and manifold advantages it brings in prestige and memories, will not be lacking Tuesday when the Southeast Missouri District Fair is unfolded before the populace of this section.

By no means is it to be thought that Cape Girardeau is not, or has not, been a fair town. Back some 82 years ago when James Buchanon was president of these United States, the folks of this section were gathering each fall to show their produce and exhibit the articles of their handiwork.

The affairs were continued 71 years, apparently without a break, as files of The Missourian in 1929, the last year the event was held, refer to it that year as the 71st annual. Then came the break of 11 years until now, with a new fair board, a new administration and above all, a magnificent plant in which to hold the fair, the 72nd in the series will be conducted.

Back when the fairs originated, they served much as a market place for farmers, who brought their produce to the city. Gradually this wore out, and the fair became more of a festival, with the harvest exhibited and articles of handiwork placed on display for premiums.

The fair has had three sites, including the present location. The first fairground was located on the Gordonville Road, a mile west of the city. It served for many years in the last half of the 19th century, but, like all things, gave way to progress.

It was in 1900 that members of the fair board decided to move closer to the city. As a result, the project that year was moved to Fairground Park on West Broadway, without suspension of the regular program or the loss of the fair.

The exposition held in October, 1904, was the first following a large number of improvements at the park. For it the old pond of water had been enlarged into a lagoon 400 feet in diameter, new stalls were erected for the livestock entries, a baseball diamond was laid out, city water was brought to the grounds and the premium list was revised to bring it in line with the best practices of modern agricultural fairs.

That year, with the new improvements and the benefits to be derived from them, the greatest fair in the 46-year period was held. Opening day throngs were three times those of the previous year. Thursday it was estimated that over 10,000 persons were in attendance and on Saturday the crowd was figured at well over 11,000.

The first record of a definite organization for Cape Girardeau fairs was made in 1870. Then a fair association was organized, bringing some order out of the hodgepodge which had characterized previous arrangements.

This board served until 1898, when a Cape Girardeau County Fair and Park Association was organized. In that year, the first fair under its auspices was held at the old fairground on Gordonville road. Two were conducted there before it was moved to Fairground Park.

On April 24, 1916, a new fair organization was named and incorporated. This group served until the fair was abandoned after the 1929 showing. This fall, after a lapse of 11 years, the fourth fair association goes into operation with a far more impressive plant than any of its predecessors ever believed would have been possible and with prospects pointing to the greatest in the long and varied history of Cape Girardeau and Southeast Missouri fairs.

After establishing a record for attendance Saturday, the revived Southeast Missouri District Fair closed Sunday night with another day registering a favorable attendance and, in the opinion of fair officials, putting the exposition on the "pay out" basis.

The largest crowd ever attending a fair in Cape Girardeau jammed the park Saturday, the actual count of paid admissions totaling 17,638. This includes automobiles, for which there was the same admission fee of 25 cents as individuals, but did not include the fair board's estimate of 5000 children of 12 years old and under admitted free, and approximately 2000 persons who had passes into the grounds because of their connections with various concessions and exhibits.

Fair board members agreed on an estimated total attendance Saturday of between 20,000 and 23,000.

Fair officials expressed belief the total for the week ran close to 50,000 persons.