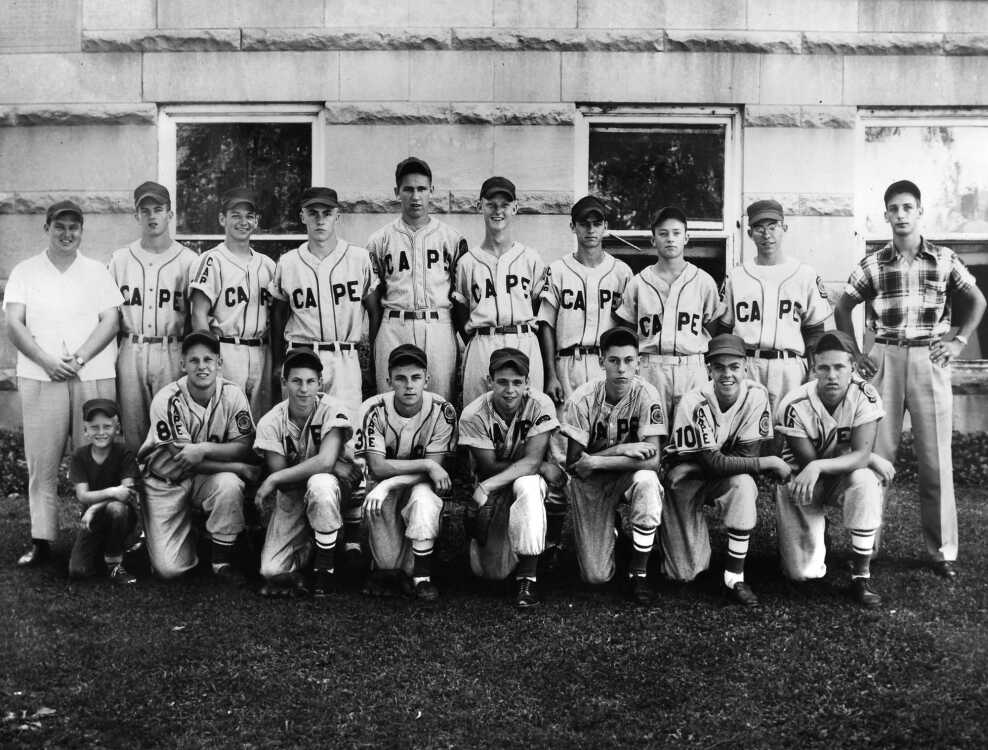 C.W. "Dub" Suedekum shares this picture of the 1951 Cape Girardeau American Legion Junior baseball team which captured the state title with a win over the Columbia Legion team Aug. 5, 1951 in Trenton, Mo.

This previous blog includes a picture of the team after winning the zone tournament. It also covers their pursuit of the regional tournament crown.

The Cape Girardeau American Legion Junior baseball team is the champion outfit of the state, capturing the title in the state tournament held over the week end in Trenton with three straight victories.

The team's next tournament will be the regional one at Altus, Okla., this month for state champions from Oklahoma, Kansas, Iowa and Missouri. No date for the tournament has been announced.

The champions won the title Sunday afternoon with an 8 to 3 victory over the Columbia Legion team after previously defeating Springfield in the first game Friday, 9 to 3, and then winning from Kansas City Saturday, 9 to 1. Paul Heuring went the route for the champs, allowing seven hits, while Cape made 14 off Cooper of Columbia. Heuring contributed to the victory with a homerun and triple, and Walter Ford got a triple. Heuring and Ford each made three hits. Cape made one error and Columbia three. Cape scored three runs in the third inning, one in the fifth, three in the sixth and one in the eighth. Columbia scored once in the third and two in the ninth. D. Whiteside got the only extra base hit for Columbia, a double. Heuring struck out 9 batters. Cape made five hits in the third and three in each of the fifth, sixth and eighth frames.

In Saturday's game Truman Blackman allowed Kansas City four hits, two in the second and one each in the fourth and sixth. The lone run was made in the second frame. He struck out 11 batters. Cape turned in eight hits with Bob Miller the leader with three. Cape had a big inning, the third, when six runs were scored on three hits. One was made in the fifth and two more in the ninth. Cape made only one error. Miller got the only extra base hit, a double.

Southpaw Joe Weaver went the route in the opener against Springfield, holding the opponents to 7 hits while his mates turned in 13. Weaver struck out 14 batters. Cape scored one run in the second, five in the fifth, two in the seventh and one in the eighth, while the opponents made one in the third and two in the fourth.