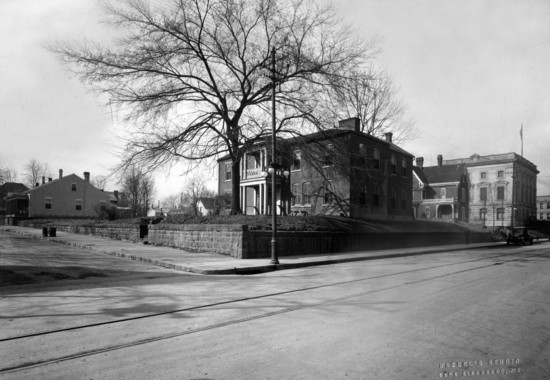 The Doyle house at the southwest corner of Lorimier and Broadway circa 1923. (Kassel's Studio photo) 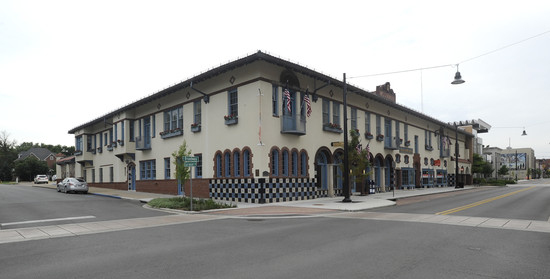 The Southeast Missourian building as seen in 2013.

Located at the southwest corner of Lorimier Street and Broadway, the Doyle house faced Lorimier with a spacious front yard. It was a two-story brick house designed in the Early Classical Revival style, characterized by the two-story entry porch dominating the front facade with eight supporting columns equally spaced, which is less common than the normal four columns of this style, and a narrow line of dentils that adorn the cornice.

The house appears to have had an addition in a similar style built on the rear. The exact date of construction isn't known, although some sources say the house was built in the 1830s or 1840s. According to a 1924 newspaper article, the house was believed to have been built by Edward F. and Eliza Jane Evans some time after 1828. She and her second husband, Christopher B. Houts, sold it to Constantine T. Gale and William H. Gale in 1849. The Gale brothers raised their niece, Katherine Gale, in the home, and she married Leo Doyle in 1882.

Fred and George Naeter purchased the property in 1924, and the house was razed to make room for the present Southeast Missourian building. -- (from Lost and Saved)