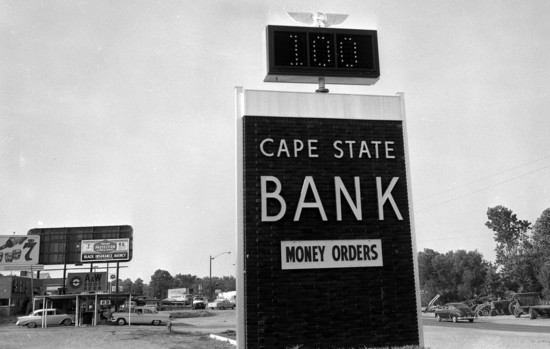 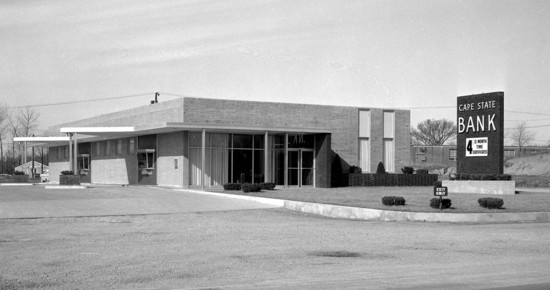 The new Cape State Bank, officially sanctioned this week by Finance Commissioner G. Hubert Bates, made its first move to relocate in Cape Girardeau on Thursday with acquisition of a tract of ground on the west side of Kingshighway south of the Broadway intersection.

The property fronts 350 feet on the highway and is 300 feet deep. It extends from the A. & W. root beer stand on the north to the Travelers Cafe on the south.

Officials of the bank said the hill to the west will be removed and the site will be leveled. The property extends westward to connect with the east line of the Ralph Edwards Sportswear plant.

Two buildings on the tract are to be removed and razing operations on one began Thursday simultaneous with the purchase of the land from Charles N. Harris.

Planning provides for the transfer of the bank from Gordonville to Cape Girardeau about the first of the year, officials reported. They said the finance commissioner has authorized temporary quarters until a building is erected on the Kingshighway site.

In the period before removal here, operations will be continued at Gordonville, officials emphasized....

On Saturday the bank will switch to the magnetic tape numerical system of control. Under this, a number will be assigned each account, will be carried at the bottom of each check written on that account and will last for the life of the account.

This, it was explained, makes possible the use of the latest electronic equipment in sorting, posting and other handling of checks....

....Concurrent with announcement of the Cape State Bank's plans, incorporators of the proposed Bank of Cape Girardeau and of both existing banks announced they have no plans to appeal the ruling of the State Banking Board granting a charter to the new bank.

JEFFERSON CITY -- Testimony that Cape Girardeau does not need a third bank continued today before the State Banking Board as the two existing banks concentrated their fire on efforts to move the Bank of Gordonville and change its name to the Cape State Bank.

Opposing state approval for the removal of the bank to a location in the rapidly-growing west end are First National Bank and Farmers & Merchants Bank.

Cape State Bank was chartered in 1904 as the Bank of Gordonville. In 1961, the bank moved its operations to Kingshighway in Cape Girardeau. In 1963, the bank opened a facility at the Town Plaza Shopping Center.