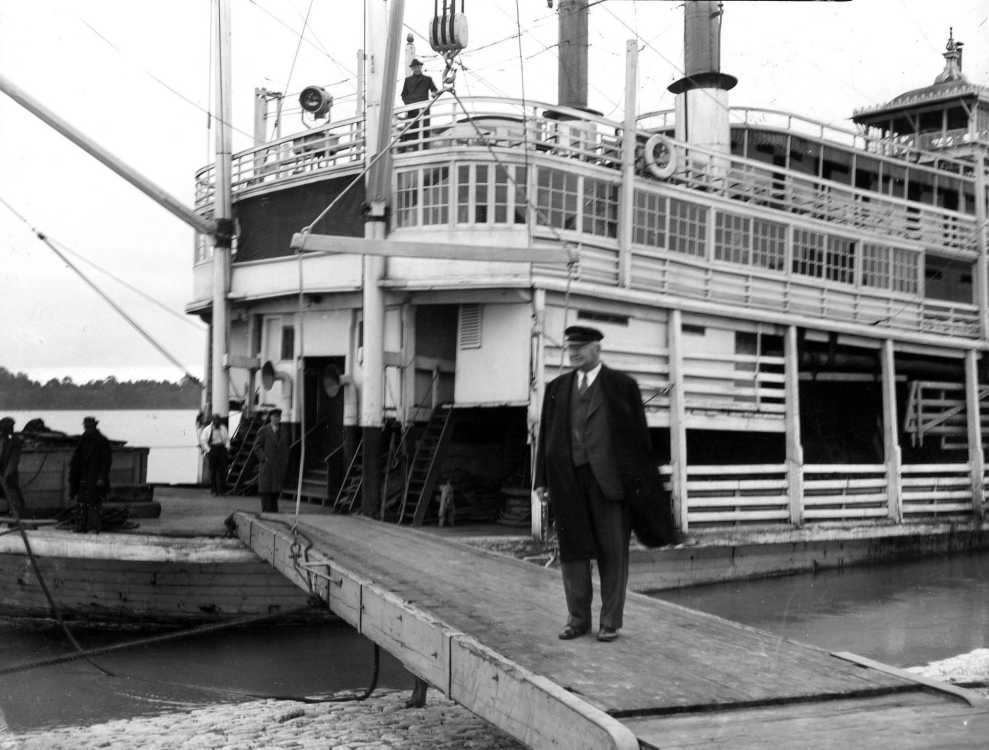 Today, somewhere down towards Sheffield, Ala., a rotund and most jovial person was still receiving the plaudits of cheering throngs along river shores as "master of the inland waterways." The responsive beaming smile could belong to none other than Capt. Wm. H. "Buck" Leyhe, master of the good ship Golden Eagle, which crossed the finish line at Cape Girardeau at 3:25 a.m. Sunday to win, against time, a steamboat race between the Delta King of the San Joaquin River and Delta Queen of Sacramento River, California.

The Golden Eagle, making the 128 mile trip from the dock at the foot of Vine street in St. Louis to the finish line at Broadway at Cape Girardeau, in 9 hours 10 minutes, made an average speed of 13.8 miles an hour, while the Delta King averaged 11.54 miles an hour.

A cheering throng of from 500 to 1000 persons who had waited until shortly after midnight at the foot of Broadway, standing on high ground to keep their feet from getting dampened by the Mississippi River's flood, let out a chorus of shrieks as the Golden Eagle, ablaze with light and noise with 75 cheering passengers and a cap-waving crew, crossed the finish line at Broadway, made a wide swing, reversed, and glided into its temporary dock at Broadway. The crowd filled all of the space on sidewalks and Water street not covered by the flooded river.

The Delta King took 8 hours 28 minutes for a 90-mile trip down the San Joaquin River from Stockton, Cal., to San Fransisco, and its sister ship, the Delta Queen, took 9 hours 39 minutes for the 110-mile trip down the Sacramento River to San Francisco. The ships met and steamed together to Treasure Island at the Golden Gate Exposition in San Francisco Bay.

Today a copy of the telegram, received by John F. Ward, secretary of the St. Louis Propeller Club and an official of the Inland Waterways Corp. from J.E. Carpenter of the California race committee of the California State Chamber of Commerce conceding the victory, had been relayed to Capt. Leyhe. The telegram said, "Concede victory to Golden Eagle for best average time. Forwarding pennant with deer-horn design."

This pennant, symbolic of the winning of a steamboat river race, will be flown from the mast of the Golden Eagle, only remaining Mississippi River packet, as long as the boat is undefeated. Where the tradition of the deer-horns began, officials of the Inland Waterways Corp. and other river men here Sunday on the Golden Eagle, were unable to determine.

_Of Course the Eagle Won__

We knew it all the time and so did everybody else who knows Capt. Buck Leyhe. Regardless of what the watches show his boat can beat any other boat at any kind of a game, so the announcement that the Golden Eagle came down the Mississippi at a faster clip than the boats out in California were able to steam brought no startling information.

But there must be something wrong in California? For those people to admit defeat, or even to accede supremacy to someone else isn't regular. Their boats evidently are merely scows intended to keep excursionists out in the river until all the refreshments are consumed, while the Golden Eagle glides along to the satisfaction and admiration of every passenger.

That a hundred or so people hung around the levee Saturday night until the Eagle came in and was made fast is also not in the least unusual. There are still many men who have not lost their love of the river and its boats and they were on hand to get possibly the last glimpse of a race that may end for all time such exciting spectacles. And there was a crowd of friends at the river from daylight until the Eagle left to greet Captain Buck and wish him many more years in the game.

The Golden Eagle river packet was built in the 1890s with 300 horsepower, a fourth of the horsepower of either of the coast boats that were built in 1926. Capt. Leyhe claimed the Golden Eagle would have the advantage in drawing less water than the other steamers.

The river was high at the time of the race. The April 24, 1939 edition of the Southeast Missourian also reported on the river with this picture: