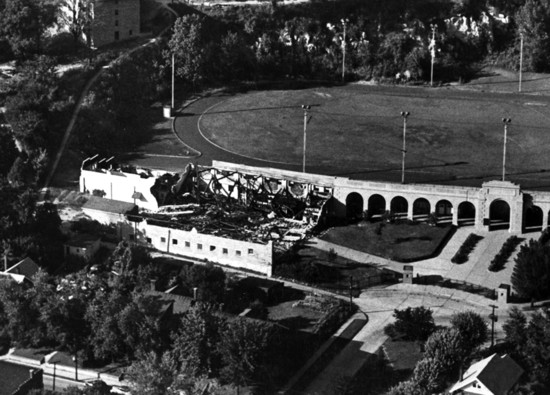 This aerial photo by G.D. Fronabarger shows the remains of the original Houck Field House next to Houck Stadium at State College in 1950. Below is a photo showing the interior of the field house on the front page of the Southeast Missourian on April 20, 1936.

Houck Field House, long a center of community activity, was destroyed by fire of undetermined origin at 7 a.m. today. Six men State College students, living in the building, fled to safety through a window after one of their number smashed the glass.

No official estimate of the loss was available, but in unofficial estimates, based on present day building costs, it was thought it would run as high as $75,000. In addition to this, more than $10,000 worth of athletic equipment, practically the entire college stock, was lost....

....The stoker to the furnace was shut off early in the evening, the students said, this being the customary procedure.

One theory advanced was that perhaps a lighted cigaret had been dropped in the bleachers during the evening and that the dry timber smoldered for hours before breaking into flames.

The fire broke out in the midst of a dense fog that reduced visibility at times to less than one half block.

The field house was erected in 1927 at a cost of $29,496.96 and has served since as a general community and recreation center not only for the college but for the whole town.

President W.W. Parker said that he would confer at once with members of the Board of Regents....

...."If and when a new building is erected," Dr. Parker said, "it will have to be more adequate."

The loss was partially covered by insurance, the college carrying $20,350 on the building.

The fire came only a few hours after a crowd of 1500 persons saw a charity basketball game between the Kiwanis Club and Optimist Club. The game was over about 10 o'clock....

....Mr. V.A. Chapman, superintendent of grounds and buildings, told a reporter the fire seemed to have started on the north side of the building about midway in the bleachers. he said that wiring was out as a possible cause because of the conduits, and additionally, that the college power went off at 11 o'clock as it regularly does.

There was no possibility, either, he said that the furnace could have cause the fire. It is lined with a 24-inch flue lining and there would be no chance of a blaze from this cause, Mr. Chapman said he believed....

....The flames also destroyed a bass horn valued at $400 belonging to the College Band, a drum worth about $60 and an upright piano on which no value could be placed. A bass horn belonging to the Cape Girardeau Municipal Band and left there following the game Monday night was also ruined. It was valued at around $500.

Until a few weeks ago a large number of men students were housed in dormitory fashion with double deck bunks, in the handball court at the rear of the building. They had been moved to other quarters, however, and this section was unoccupied. 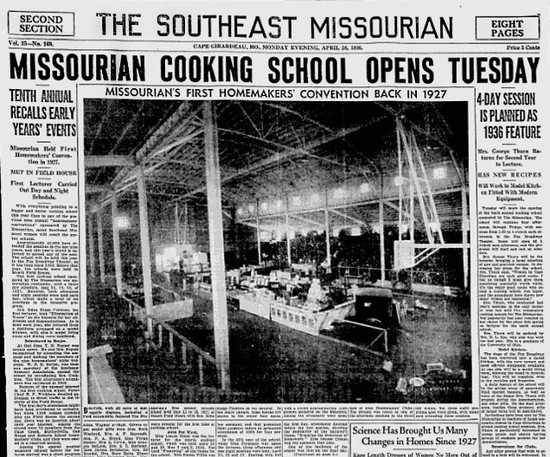