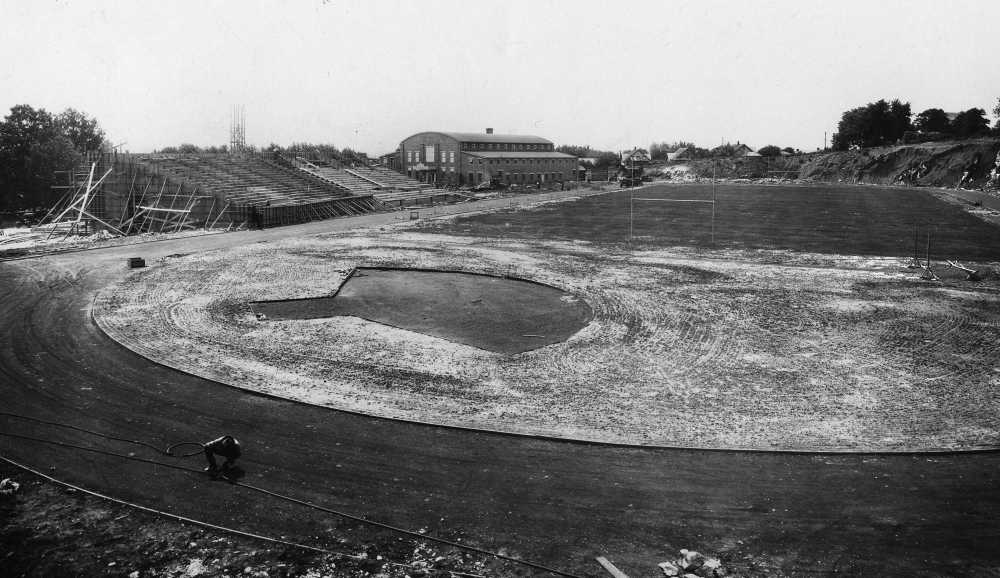 These pictures of the interior of Houck Stadium while under construction were published in the dedication edition of the Southeast Missourian, Oct. 3, 1930. Here is one of the stories published that day:

In the presence of a crowd of 5000 persons including Missouri's chief executive, Gov. Henry S. Caulfield, presidents of colleges from over Missouri, high railroad officials and men and women prominent in the affairs of Missouri and Illinois, Houck Field Stadium was dedicated with impressive ceremonies today.

The achievement of the Teachers College in constructing one of the most complete athletic plants in this section of the nation was heralded by speakers and paid tribute to by thousands of admirers who gathered at the stadium to witness one of the history-making days not only of the Teachers College and Cape Girardeau, but all of Southeast Missouri.

At exactly 10 minutes past 12 o'clock, Miss Mary Gibony Frissell, only granddaughter of the late Louis Houck, walked from the platform before the great arched entrance to the stadium and smashed a bottle on a corner of the concrete structure and christened it "Houck Field Stadium" to perpetuate the memory of the grandfather who gave 39 years of his life to further the interest of the college.

Dedication exercises started immediately after the close of the parade at the athletic field. On the platform President W.C. Bahn, of the present Board of Regents of the college, presided at the opening of the ceremonies. The crowd joined in singing "America" while the college band accompanied.

Judge James A. Finch, vice president of the Board of Regents, offered a statement on the history of the college bowl, and formally presented the stadium to President Joseph A. Serena. Judge Finch called attention to the fact that stone quarried from the quarry which is now the football field was used in the Washington Monument at the nation's capital, in the state capital in Louisiana, in other buildings throughout America and in the college buildings themselves.

President Serena spoke briefly in acceptance of the stadium and told how the college had tried to provide the district with something permanent. At the beginning of the efforts to erect the $150,000 stadium, President Serena said it seemed like a will o' the wisp was being chased.

A huge bouquet of roses, 39 buds in all, each representing a year of service of the late Louis Houck as a member of the Board of Regents, was presented to Mrs. Houck, widow of the late leader, as she sat on the platform.

It was with a fondness for the "old times" that have passed in the history of the college and its gridiron history that former Congressman James F. Fulbright of Doniphan, told of "Football in Days Gone By." In 1889, more than 30 years ago, Fulbright recalled, he was captain of the Teachers College team that went to victory as district champions without a score made against it.

He told of the organization of the first football team at the old Normal School in 1897 by E.W. Nelson, now a prominent lawyer of Hannibal and a member of the state legislature. He pointed out to Dennis M. Scivally of Cape Girardeau, sitting far up in the bleachers, as a member of that team.

A particular incident recalled was that when signals were called by Fulbright for A.M. Spradling, Cape Girardeau attorney and president of the Board of Education, to run a play around right end, Spradling got his nose broken and wanted a substitute, but Fulbright said he sent him back in the game with a nose guard. Spradling threw the nose guard away and finished the game, the scorer being 4 to 0 in Cape's favor. That was on Thanksgiving Day.

He also pointed out to R.G. (Reece) Allen of Benton and told how this diminutive player silenced the Carleton College rooters of Farmington on one occasion when he made a run of 55 yards.

"I hope to see the men on the football field for old Cape Girardeau today, inspired by the warriors of yesterday who will be here in the stands back of you, sweep to a great victory this afternoon and put the name of the old town up in the honor roll with the great teams of the country," Fulbright concluded.

The thousands stood a moment in respect as Missouri's chief executive was introduced by President Serena, who formally presented the stadium to Missouri through Governor Caulfield.

"In the same year that the Cape Girardeau Teachers College was established, 1873, a baby boy was born in the city of St. Louis. He is proud to represent his state today as its chief executive," the Governor said as he addressed the throng.

He praised the college for its achievement in erecting the stadium and for the progress it had made generally. "The progress of the college is in keeping with the progress made by Cape Girardeau, a beautiful progressive city," the chief executive declared.

"The value of universal education in Missouri is all important. Every child born in this state is the potential governor of this state, for within the ability and will of every child who grows to manhood and womanhood rests the welfare of this commonwealth. Physical education teaches obedience and submission to rule. It inspires leadership," the Governor concluded. 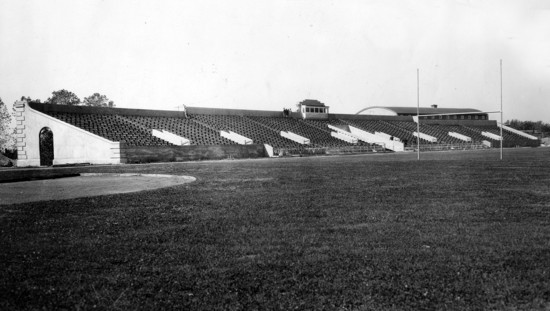