Matteson Quarry was purchased in 1925 as the site of Houck Stadium which was built in 1930.

Some of Cape Girardeau's Finest Residences, on Pacific, Broadway and Henderson, Involved in Unusual Legal Mix-Up

Twenty-eight homes, valued at nearly $200,000, adjacent to the Matteson quarry property between Pacific and Henderson avenue and north of Broadway, are included in the property being offered for sale under foreclosure proceedings of the Matteson estate on Sept. 17, according to the terms of the notice....

Matteson once owned all the property involved in the mortgage, which includes the territory bounded by Pacific street on the East, Bellevue and Broadway on the south, Henderson on the west and the extension of North street on the north. He sold lots on each of the streets, but worked the property in the center as a quarry until a short time before his death three years ago. In 1919 he gave a deed of trust of the property to secure notes for money, borrowed to operate the business, and it is on this mortgage that the foreclosure proceedings were instituted to sell the property.

The May 21, 1925 Southeast Missourian reported the Board of Regents of the Cape Girardeau Teachers College voted to purchase the quarry property on Bellevue street for a price in the neighborhood of $12,000.

[The quarry was purchased for $11,000 at the recommendation of then-college President Joseph A. Serena.] 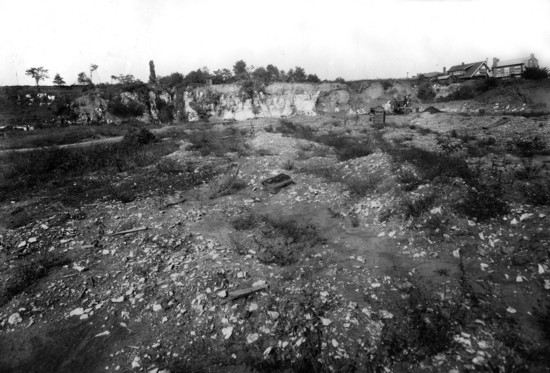