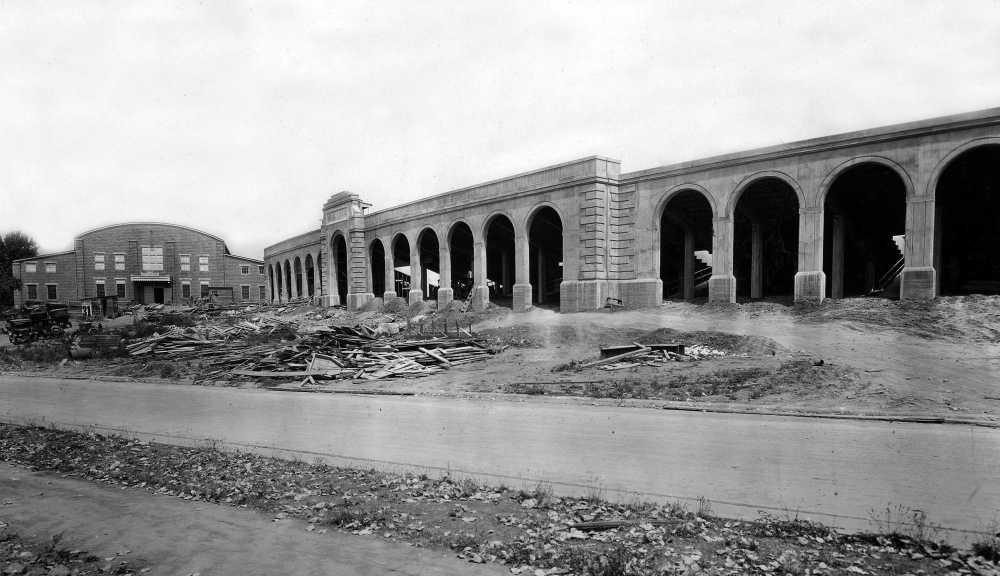 At left is the original Houck Field House. The building opened in 1927 with a district high school basketball tournament. Fire destroyed the building on Feb. 17, 1948.

A week from today, Oct. 3, the Teachers College will dedicate the new $150,000 Houck Field, one of the most complete college athletic plants in this section of the country. Indeed, those who have inspected it, have decided it is the most complete plant in Missouri, not excepting the state university.

And now, as the finishing touches are being applied to the structure, which pays so fine a tribute to athletics, Cape Girardeau and all of Southeast Missouri is witnessing only the beginning of what in the future will be a larger institution dedicated to the physical well-being of youth.

This first unit will seat approximately 7,000 persons. Within at least two more years, if football receipts are satisfactory, the second unit of the stadium will be constructed, on the north side of the field. This section will be much larger than the present unit. The west end of the bowl will then be built, while the east end will be left open, bringing the seating capacity to approximately 22,000 persons.

The Field House was constructed from cement blocks, the roof being supported by an inner steel structure. The basketball court, the training quarters, shower and dressing rooms and office quarters beneath the bleachers on both sides of the playing floor are among the best equipment of their kind in the state.

From out of the ruins of an abandoned quarry grew the site for the Field House and the football field and stadium. Persons who have resided in Cape Girardeau for a decade well know the physical drawbacks to the site selected by Dr. Joseph A. Serena, the college's president, and its Board of Regents. With construction gang recruited from divers sources the first work on the athletic plant was begun in May, 1926, and now the results of this labor are being revealed.

Countless tons of rock were blasted away from the towering precipices in the abandoned Matteson Terrace rock quarry to make room for the playing field. This stone--no record was ever kept of the exact amount of it--was used in building up the shoulders of the field and furnishing a base for the running track. Much of it was used in constructing the approaches to the Cape Girardeau bridge.

The stadium proper is approximately 400 feet long and rises 25 rows high in the central sections. Along the entrance to Broadway are 20 ornamental gothic-type arches, including a major arch for the entrance. The entrance rises approximately 30 feet from the ground with an ornamental central structure containing the words "Houck Field," and the date, "1930," underneath the inscription. The entrance is one of the most imposing of any athletic plant in the country.

The entire area underneath the stadium is paved with concrete, and there is ample standing room for about as many thousands of persons as can be crowded into the bleachers overhead.

The bleachers are constructed from specially treated Douglas fir, a light, but substantial, weather-resisting wood.

The lighting equipment at Houck Field is equal to that of any field in the Middle West, according to college officials. Mounted on each of 10 fabricated steel towers 50 feet high are two huge reflectors in which burns a globe of 2000-watt power, making the total power on the field 40,000 watts. College officials spent several weeks searching for the type of equipment desired to make the field one of the best equipped for playing night football. The first night game will be played on Friday, Oct. 17, when Haskell Institute Indians call here from Lawrence, Kan. This, incidentally, will be the first night college football game ever played in Southeast Missouri.