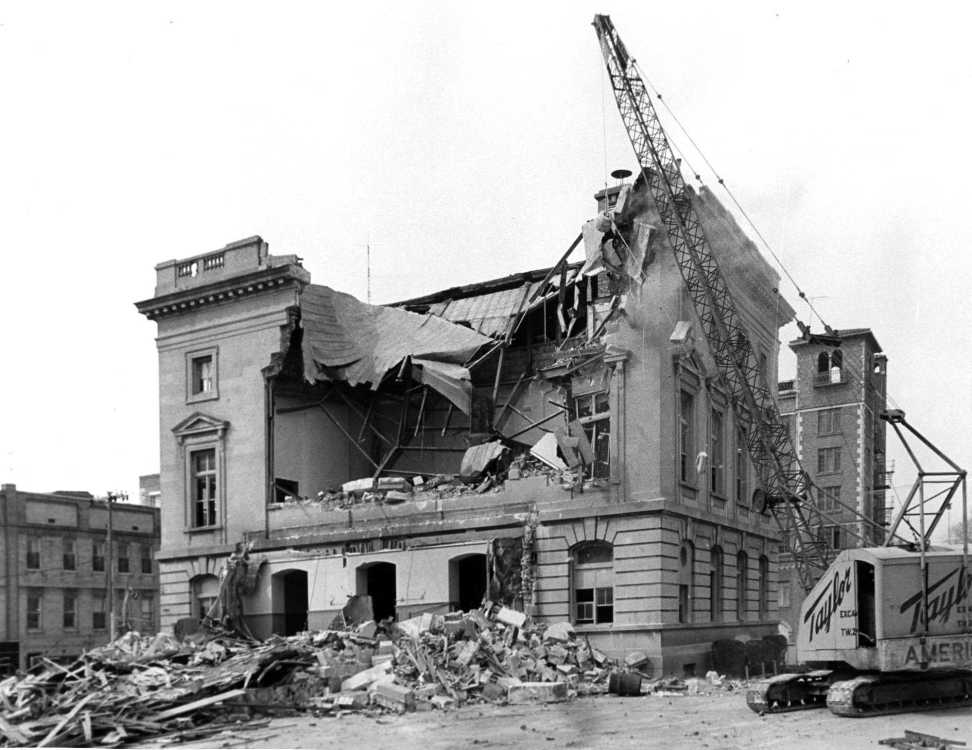 The pounding of a heavy wrecking ball Thursday left a gaping hole in the rear of the old post office building, being demolished to make room for a new federal building. The upper level cavity was the United States District Courtroom. At right is the derrick from which the ball swings. In the background on the right is the Marquette Hotel across Broadway, and to the left is the Idan-Ha Hotel. (Southeast Missourian archive)

That "headache ball" which weighs 3,100 pounds will have the old postoffice-federal building on Broadway broken up into bits and pieces by tomorrow, Charles Hintz of Hintz Wrecking Co. said today.

"We could have had demolition completed today," he continued, "but construction of a shelter sidewalk around the work area held us up."

Actual demolition of the building began yesterday after salvageable material had been removed from the inside.

Mr. Hintz, when asked how difficult a task demolition of the old federal building is, said, "we've had some that were harder to get down, but this is a well-built building."

He pointed out that concrete buildings are sometimes more difficult to demolish. The federal building was of steel frame construction with granite and stone exterior walls.

The ball used in the demolition is swung towards or dropped down on the building. The amount of damage done at one time depends on what sort of material it meets.

"Sometimes," the crane operator said, "we swing it several times before anything happens, and then a whole section comes down at once."

From the appearance of the building this morning, the ball does its work extremely well.

The future home of what was once the federal building is a dump on Country Club drive, it was reported. Most of the exterior material is not worth the cost of salvage, according to Mr. Hintz.

Some of the steel beams, however, which are straight enough for future use, will be salvaged and sold, he said.

The building, built in 1910, served as Cape Girardeau's postoffice until a new facility was constructed in 1965. It was also home of the Federal Court here.