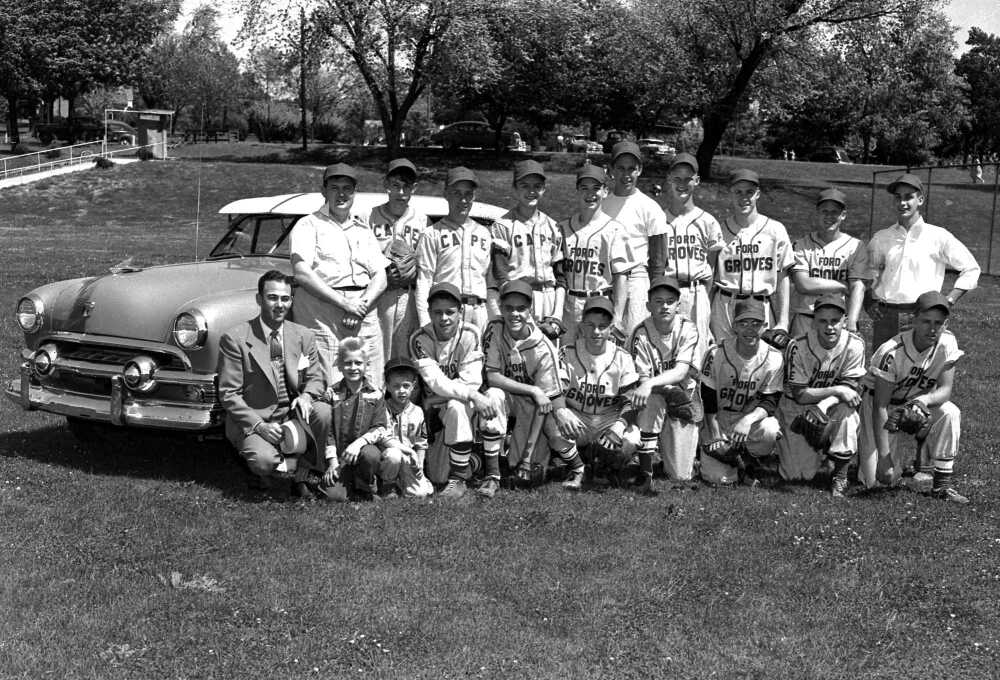 The Cape Girardeau American Legion Junior baseball team won the zone championship over the week end at Farmington, clinching it with a 16-to-1 victory over the Voiture 38 team of St. Louis, city champions in 7 innings, the same team which they defeated Saturday afternoon, 11 to 1, to advance to the finals. Cape won its first game Friday night from the host team, Farmington, 5 to 4, in 11 innings.

By winning the championship Cape will represent this zone in the state tournament at Trenton this week end. The Stockham Post of St. Louis won the zone title here last year and went on to win the state title and place second in the national tournament.

C.W. Suedekum, Cape's leftfielder, was the big gun in the championship game with four hits on four trips including three singles and a double which accounted for seven runs. The team made 14 hits off three hurlers. Walter Ford, Bob Miller and Johnny Moll each got two hits and Jim Minton, Paul Stehr, Bill Greer and Paul Heuring one. Ford got a double for the only other extra base hit.

Paul Heuring, on the mound for Cape, held the St. Louis team to four hits and was scored upon only in the first inning. Cape counted one run in the second inning, two in the third, six in the fourth, three in the fifth and four in the seventh. The game was called at the end of seven innings under a Legion rule which specifies that a team 10 runs in the lead at the end of seven innings shall be declared the winner.

In Saturday afternoon's game, won from Voiture, 11 to 1, Cape pounded out 13 hits against four for their opponents. C.W. Suedekum was the hot batter again, getting three hits out of five. Paul Stehr, Johnny Moll and Bill Greer got two each and Walter Ford, Bob Miller, Gary Rust and Truman Blackman one each. Cape scored two runs in the second, two in the fourth, three in the fifth, one in the sixth and three in the eighth. Blackman, Cape moundsman, held the opposition to four scattered hits not allowing more than one an inning. Voiture scored in the fourth inning.

Following the zone tournament at Farmington, an all-star team was picked by the umpires and newspaper men on which the champion Cape Girardeau team placed five and one utility player.

The Cape Girardeau American Legion Junior baseball team won its opening game in the state tournament Friday afternoon at Trenton, scoring a 9 to 3 victory over Springfield. The lads were to play Kansas City this afternoon at 1:30.

Cape obtained 13 hits, with catcher Johnny Moll leading the attack with 3 for 5, including a triple with the bases loaded in the fifth inning when Cape scored five runs. He also got a double and single.

Paul Stehr got 3 hits in 4 times at bat and C.W. Suedekum 3 its in 5 times at bat. Walter Ford and Bob Miller got one for 4 each, Bill Greer one for 5 and Jim Minton one for one. Minton drew four walks. Gary Rust and pitcher Joe Weaver were the only two players who failed to hit.

The Cape Girardeau American Legion Junior baseball team today is the champion outfit of the state, capturing the title in the state tournament held over the week end at Trenton with three straight victories.

The team's next tournament will be the regional one at Altus, Okla., this month for state champions from Oklahoma, Kansas, Iowa and Missouri. No date for the tournament has been announced.

The champions won the title Sunday afternoon with an 8 to 3 victory over the Columbia Legion team after previously defeating Springfield in the first game Friday, 9 to 3, and then winning from Kansas City Saturday, 9 to 1. Paul Heuring went the route for the champs, allowing seven hits, while Cape made 14 off Cooper of Columbia.

Altus, Okla. Aug 20--Cape Girardeau's gallant Legion lads came up off the floor in the last half of the ninth inning to pull all even with Davenport, Iowa, but faltered in the tenth to drop their national regional tournament opener Sunday night, 5-3.

The loss sent the Cape boys into a losers' bracket game against the Altus Harvesters, Oklahoma champions and first round victims of Wichita, Kan., 3-2.

The Oklahoma and Missouri lads played it nip-and-tuck for the first six frames with Altus scoring first in the first, Cape knotting the count in the third and then going ahead 2-1 on pitcher Paul Heuring's homerun. Altus moved back into a deadlock at 2-2 in the sixth, and then turned in a seven-hit nine-run spree in the big seventh.