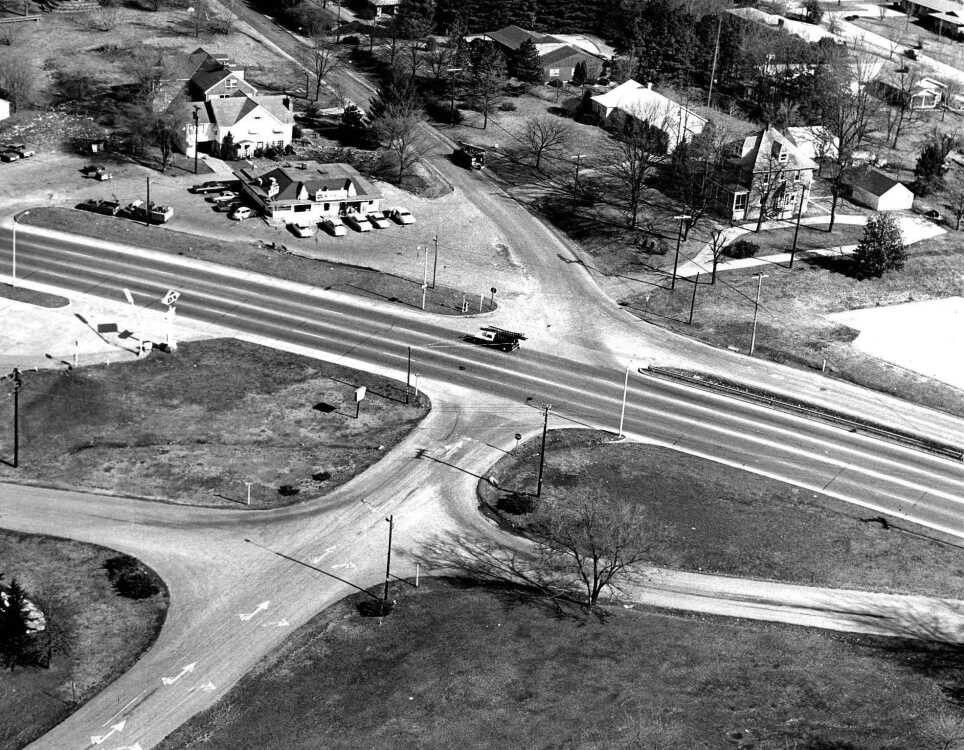 This aerial photo made in February 1968 shows the intersection of Highway 61 and Cape Rock Drive, with the Arena Park exit at the bottom of the photo. At top left is Wimpy's Drive-In. (Missourian archives) 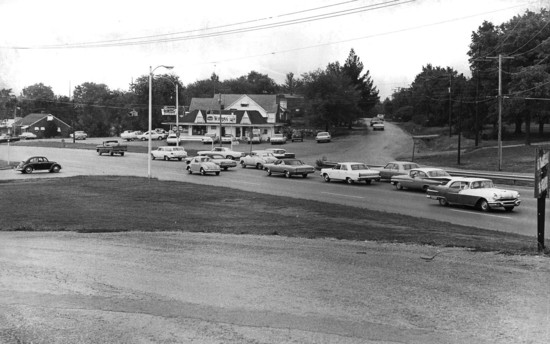 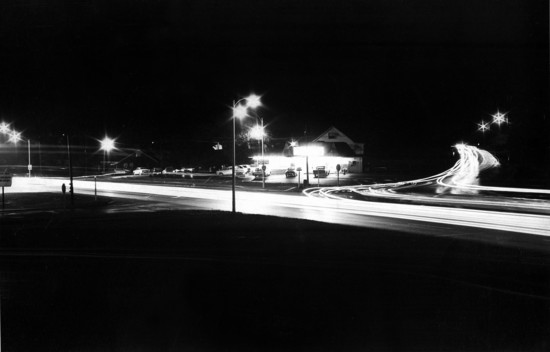 The day-and-night photographs (above) show what likely is Cape Girardeau's most dangerous, traffic-blocked intersection, the complex arrangement of streets and drives at the Highway 61-West Cape Rock Drive-Arena Park entrance.

Besides these four major lanes of traffic, there are live drives within less than 100 feet of the intersection that pour traffic onto it.

Two of these are from the drive-in restaurant shown in picture, two are from a service station at left out of picture and the fifth is Kingsway drive, right above top of cars.

In addition there are two streets, Broadview, foreground in photos, and Maria Louise lane, left out of the picture, also less than 100 feet from the intersection, that put traffic into the area. Factories on Broadview daily pour volumes of cars onto Highway 61 at this point.

Motorists have complained for years about the traffic problems here. These antedate the four-lane construction and were increased proportionately by the additional difficulties created by four lanes of traffic.

Control of the intersection, which involves a federal-state highway, rests with the State Highway Department, and not with Cape Girardeau officials.

The top photo shows the intersection at a rather normal period of traffic. It ebbs and flows, but the number of cars seen here is not unusual at any time of day. More cars are coming in from Cape Rock Drive and one is at the park entrance. Vehicles parked at the restaurant move in and out of the highway and drivers from Kingsway have problems both from Cape Rock Drive and Highway 61.

In the night scene, the huge volume of traffic is indicated by light streaks of automobile headlights on Highway 61, almost solid and by those automobiles turning off of Cape Rock Drive. Lights of cars at the park entrance did not show well because they were going away from camera and not approaching.

Many motorists trying to cross the highway from Arena Park find it more convenient to turn right, go to the Broadway traffic light, make a U-turn and come back up the opposite traffic lane.

The need of a traffic signal to help regulate the intersection has been frequently urged on the State Highway Department and currently is being considered.

Work on the overhaul of the intersection at Cape Rock Drive and Kingshighway is within a day of completion--but this day may not come until the first of January.

Construction on the intersection is complete, median strips are in, signal heads are up. But no signals. This is because the signal control and control cabinet has not been delivered to the contractor, Steinhoff and Kirkwood.

L.V. Steinhoff said there are only two firms in the country that make these parts. An order must be placed with one or the other. He said the firm the contractor placed the order with first gave a delivery date of September. The date for delivery was then pushed back and the last notice was for a delivery date the latter part of December or early January.

Mr. Steinhoff added that when the parts are received, possibly a day's work will be involved before the signals can be put to use.

The controlling device for the electric signals at Cape Rock Drive and Highway 61, which was scheduled to have been shipped by Feb. 28, has not arrived yet.

The supplier of the equipment is Eagle Signal Co. of Davenport, Iowa, which informed the electrical subcontractor last Tuesday that testing of the controller was to have started that day and that the shipping process would be started when 100-hour tests were complete.

On this basis, the subcontractor, Cam Electric Co. of Jackson estimated that shipping would occur about today.

An official of the Cam concern said he was told that delay in the shipment of a component by a subcontractor of Eagle had caused the Feb. 28 date to be missed.

The Cam spokesman said he understands delays in shipment of electrical signal equipment is general throughout the state and is caused by manufacturers' efforts to build greater reliability into the equipment.

The work at the intersection, considered one of the busiest and most dangerous in the city, has been finished several weeks and the signal heads have been installed awaiting the controlling device.

The traffic signals at Cape Rock Drive and Kingshighway were activated at noon today, the State Highway Department reported.

An employe said they seemed to be working properly, though checks would continue to be made for a time.

The signals, which have been in place for several weeks, could not be activated until a controlling device was delivered. It was installed Monday.

This previous blog has three more links about Wimpy's: