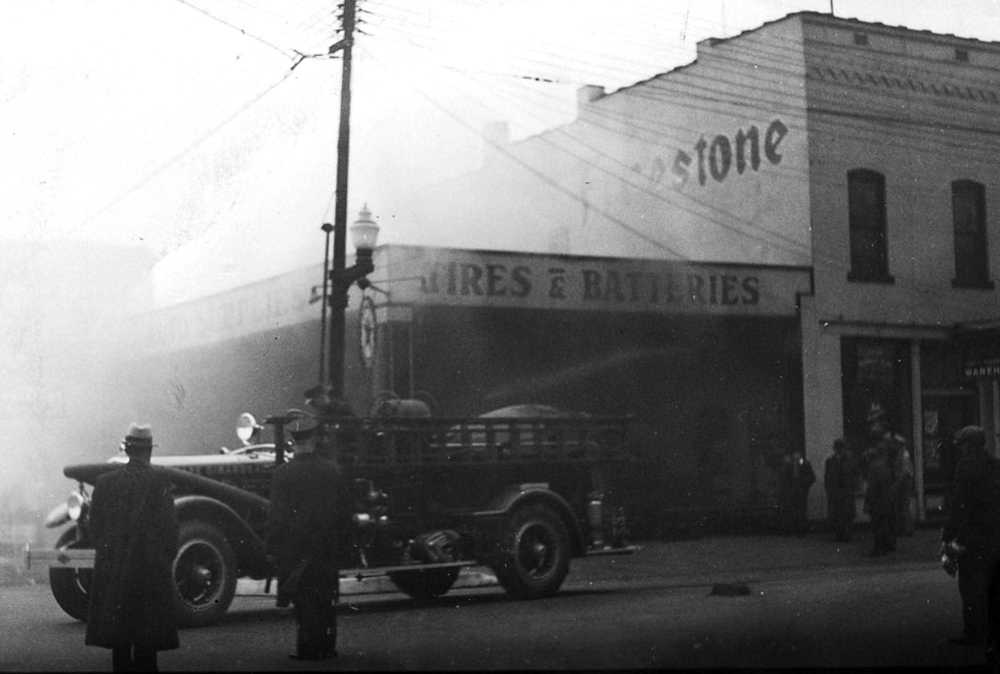 This picture shows a fire which for a time shortly before noon today threatened the Firestone Tire and Rubber Co., station at 1 South Main street. One man was seriously burned on the arms in the blaze thought to have started from gasoline fumes. (G.D. Fronabarger photo)

Man is Burned During Blaze at Tire Store

One man was injured seriously and another slightly and damage of approximately $800 was done to the building and an automobile by fire at the wholesale and retail establishment of the Firestone Rubber Co., 1 South Main street, at 11:30 a.m. today.

Ernest Loos, 22, attendant at the tire-gasoline station, was badly burned on the left forearm and less severely on the left leg and left side of his face. H.G. Bricker, manager of the station, sustained a slight burn on the right hand. Loos was taken to Southeast Missouri Hospital.

Loos was engaged at washing an automobile in one of two parallel washing and greasing stalls near Main street and at the southeast corner of the building. Chester Sarff, driver of a Texaco gasoline truck, had just finished unloading a truck load of gasoline in tanks beneath pumps, immediately north of the wash rooms and beneath a large canopy. Doors to the washing rooms were closed, it was said.

Suddenly fire flashed up around the big wooden doors, and it is considered likely fumes which escaped when the gasoline was unloaded were set off in some manner. Although flames were shooting up around the truck, Sarff, who was nearby, jumped in and drove the machine to safety.

While the doors and the framework around them were of wood, walls of the washrooms were brick. By the time firemen arrived the fire had spread over the walls and ceiling of the rooms where Loos was working and around the canopy, also around several barrels of anti-freeze alcohol in the enclosures and was within 15 feet of the gasoline pumps in the middle of the areaway.

The woodwork nearby was half burned away and all glass in walls of the wash compartment were ruined. This included 120 panes, each 12 by 18 inches.

The automobile being washed was owned by A.R. Zoelsmann, who is here from Chicago to spend the Christmas holidays. It was badly damaged by the fire, the top being burned out, all the glass badly cracked and much of the paint ruined on the car body.

Besides threatening the gasoline and other materials, the fire was dangerously near three carloads of automobile and truck tires. Most of them were on the second floor and the others on the ground floor, and all immediately adjacent to the point the fire occurred. All escaped damage.