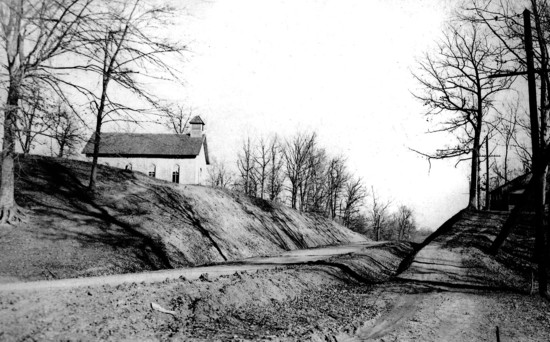 This photograph illustrates how Hobbs Chapel, a Methodist church on the old Bend Road north of Cape Girardeau, has been left almost inaccessible by the building of a new farm-to-market highway. The picture, taken from the southwest, shows the road and the steep embankment in front of the church building. The only entrance to church property is at the east or in the background of this picture and it is claimed it cannot be used in wet weather. (G.D. Fronabarger photo) 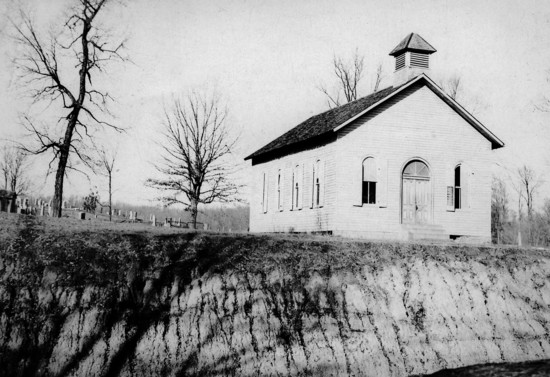 Rural Church North of Girardeau Left Standing on a High Bluff With Only Muddy Drive; Members Wait for Highway Department to Act.

Hobbs Chapel, a peaceful little rural church a short distance north of Cape Girardeau, finds itself in the odd and rather unpleasant predicament of having too much road and still almost no road at all, members pointed out today. The situation, it was said, is that the new farm-to-market road constructed in recent months past the very door of the chapel is in a deep cut which was made when the new road was built. Now the church, built on a slight mound more than 40 years ago, sits atop the embankment. The east end of the church is less than 20 feet from the edge of a 14-foot steep bank.

John W. Lindsay and Green W. Hobbs, two members of the congregation's Board of Stewards, told The Missourian today Division Engineer A.R. Towse of the State Highway Department told them and others when arrangements were being made for construction of the road, that the department would build a drive the few yards from the road to the side of the church, and that it would be graveled.

The contractor more than two months ago put finishing touches on the job and still no adequate road serves the church. However, Mr. Lindsay and Mr. Hobbs explained that a steep driveway was cut out near the northeast corner of the church grounds leading to the church. But it was not coated with gravel, is narrow and includes a sharp turn, they said, making it almost impossible except in good weather.

The men said the congregation, having given some ground to help get the farm-to-market road built, is not at all pleased with the situation.

The needed road would need run for only about 100 feet, but the embankment would need to be cut down some for a usable drive, it was pointed out.

The congregation has delayed doing anything about the condition, expecting that the Highway Department would come along and make the road a good one. It has been hard for funeral processions to get to the church grounds, particularly if coming from the direction of Cape Girardeau. And, if the weather is bad, it is about impossible to drive from the road to the church.

Construction of Hobb's Chapel United Methodist Church began in 1890. It was completed in 1892.

On Nov. 26, 1993, the 101-year-old church building was destroyed by fire. For three years, the congregation worshipped in the activity building while members made plans to build a new church.

In June 1996, Bishop Ann B. Scherer conducted a consecration service for the completed brick building.