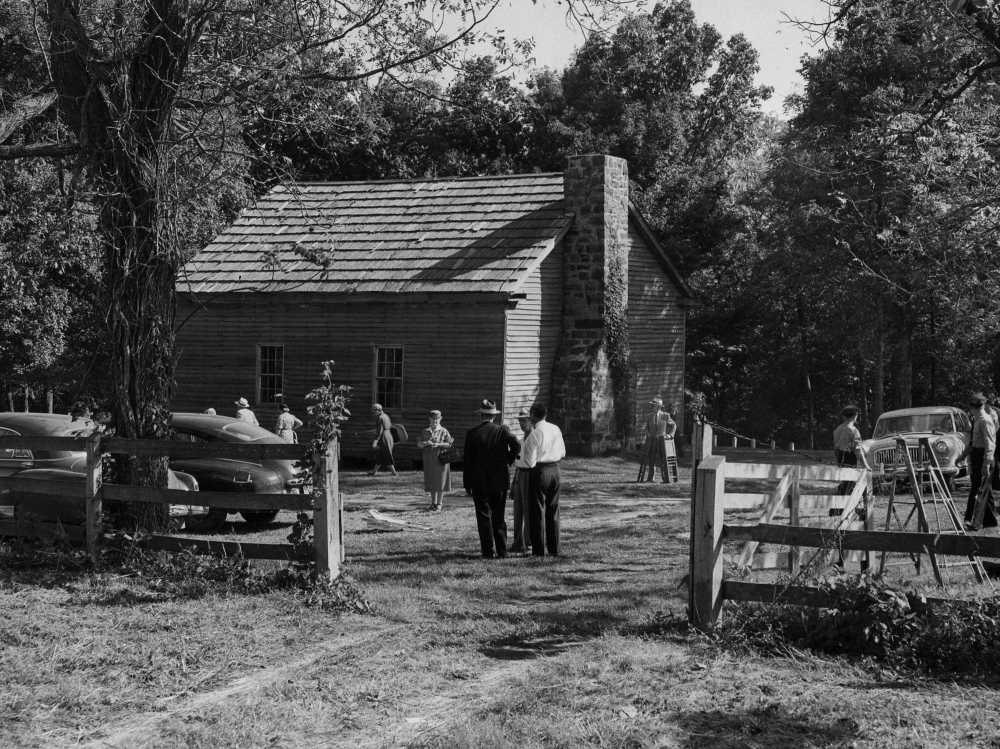 Worship Again Where District Methodism Came Into Being

With fair and mild weather in prospect, the 25th annual service at Old McKendree Chapel Sunday afternoon at 3:30 is expected to draw many worshipers.

All-weather roads lead to the Chapel and special parking arrangements will be in effect to take care of the automobiles.

While seats have been provided, the suggestion that those attending bring folding chairs so they may select their own place met with favor last year, and likely will be followed by many more this year.

The principal address at the services will be made by a distinguished St. Louis layman, J. Clinton Hawkins, a speaker of note. The choir of McKendree Church at Jackson will furnish special music; a privilege rotated among the churches of the area.

On the program will be a report by the Board of Trustees on the progress of plans to erect a canopy over the old building, and of other phases of the restoration project.

These annual services at the old Chapel are becoming more and more a meeting place for friends as well as an occasion when tribute can be paid to the memory of those who established Methodism in the district nearly 150 years ago.

Old McKendree Chapel welcomed back hundreds of worshipers from Cape County and a wide district Sunday on the occasion of its 25th annual service of commemoration of the first Methodist house of worship west of the Mississippi. The weather for the outdoor service was ideal--a balmy late summer afternoon--and the old chapel and grounds never looked better than they did yesterday, which was, to the day, 139 years since the first Methodist Conference in Missouri convened at the Old McKendree site. The attendance was one of the largest of the series of annual meetings.

The wide-spreading shade trees and the rustic chapel appeared much the same as they did in the early days. The worshippers, however, enjoyed a few modern conveniences unknown to their Methodist forefathers. A fine public address system, parking facilities for the many cars which made their way to the grounds, an organ set up outside for the singing, cool water brought out for the occasion and portable easy chairs those attending brought for their convenience--all helped to make the afternoon an enjoyable one.

Dr. Frank C. Tucker, district superintendent, presided at the service, and leading the congregational singing were members of New McKendree Methodist Church of Jackson, Mrs. Herbert Marshall, director. Special music was sung by a mixed quartet of the choir, and prayers were said by the Rev. J.C. Montgomery Jr., secretary of the St. Louis Annual Conference Historical Society and the Rev. D.E. Finley, pastor of Maple Avenue Methodist Church, who gave the benediction. Scripture reading was given by the Rev. L.E. Butler of the Methodist Church of Fornfelt.

Speaking in behalf of trustees of Old McKendree, Rush H. Limbaugh gave a report of progress being made for providing a permanent protection for the chapel. Work will begin this week on a canopy over the building to keep out damaging weather. Mr. Limbaugh told also of future plans to have a full time custodian who would protect the chapel and grounds from vandalism.

Mr. Limbaugh's statement on behalf of the trustees included informative historical data on the chapel and grounds, early Methodism, and the status of the United States in 1819 when that first Methodist Conference met at McKendree. He also thanked patrons of Old McKendree for their generosity in giving to funds for preserving the site, and helping to make Old McKendree what it is--a permanent national monument to Methodism.

The Jan. 31, 1959 Achievement Edition of the Southeast Missourian has a picture of the new canopy that was built over Old McKendree Chapel. Here is an excerpt:

This picture shows old McKendree Chapel in its new dress, or perhaps it would be better to say it shows the ancient frame house under its new overcoat. The steel canopy rests on heavy concrete piling firmly imbedded in the earth so a windstorm can do it no damage. The canopy is considerably larger than the house, thus protecting the walls from the elements and as the steel covering is something new for such purposes it not only has a pleasant look but is guaranteed to last without end. The cost of the canopy was in excess of $6000, the trustees reported.

Around the building is a heavy concrete strip, which has the appearance of a sidewalk, and this is intended to protect the frame building from possible grass fires. As the chapel sets in a beautiful grove of large native trees that are perhaps several hundred years old, and as some show the effects of having been damaged by lightning, the building was lightning rodded several years ago. The canopy now covers the rods but as soon as the weather permits they will be taken down and placed on top of the new cover. Several of the adjacent trees were also rodded and this equipment will also be extended and improved.

The congregation was organized in 1806 and became known as McKendree Chapel because the roving missionary who first came was Bishop McKendree. Meetings of possibly a dozen families were held at intervals so the congregation was small. White people were scarce then and there is no mention of Indians having been present.

Eventually the building was put up. Probably it required a year or more to get it ready for services because even the rough benches had to be made by hand. There are about a dozen of them left that are in good condition. They are good for another century, some of the ministers say.

It will be noted that Mr. Houck in his History of Missouri stressed the fact that the house was built of "great hewn poplar logs" trimmed so precisely that evidently they needed no mud to caulk the seams. At one place these logs must be restored by men who are skilled in primitive construction work and there are men still available for such work.

Houck's History of Missouri, the best authority on Missouri history, has this to say of old McKendree Chapel:

"The first Methodist Church west of the Mississippi river was organized in about 1806, at McKendree, about three miles from the present town of Jackson, in Cape Girardeau county.... Soon afterward a house of worship, McKendree Chapel, was built of great hewn poplar logs."