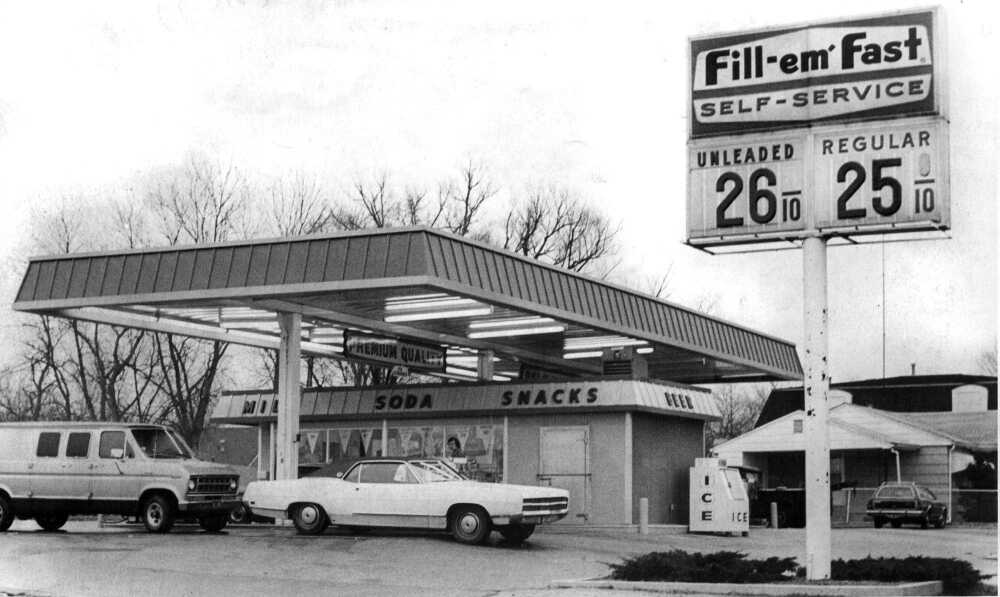 Per liter gasoline prices give city motorists a start

At first glance, motorists here must have thought the trend of rising gasoline prices had been broken with a radical rollback.

The big sign at the self-service station in the 2000 block of William read 25 cents for regular and 26 cents for unleaded.

But the Fill-'em Fast station wasn't offering a bargain in gasoline. It had merely switched to the metric system.

The posted prices were for a liter of gasoline, which is just more than a quart.

"A lot of people have been stopping this morning thinking it was 25 or 26 cents per gallon," reported station manager Anne Rosenberger.

"It's causing some confusion this morning," she told The Missourian. "People are thinking 'what's the gimmick' and we tell them it's just easier to convert to liters because a half-gallon charge confuses so many people."

She added that some motorists have thought there was a "1" missing from the price on the sign. "They think the price should be $1.25 and the one is missing," she said.

For liters is equal to 1.057 gallons in liquid measurement.

At the Fill-'em Fast station, regular gasoline that cost 95.9 cents a gallon Thursday now costs 25.3 cents a liter today (or 95.8 cents a gallon).

A spokesman for Fill-'em Fast, a nation-wide chain of more than 700 self-service stations, said the company recently converted its stations in Memphis, Tenn. He said that the conversion was confusing to customers at first but it eventually became easier. At stations were the per gallon price had been more than $1 per gallon, the use of the metric system was easier than charging a price per half-gallon and doubling it, he added. For example, a half-gallon price of 53 cents would equal $1.06 per gallon.

Several stations in the Cape Girardeau area are expected to convert to liters in the near future.

"We're all going to have to change over in the next couple of years," explained James H. Estes of the Saveway Oil Co. Mr. Estes said that he has parts on order to convert the pumps at his station from gallons to liters.

Mr. Estes said there will be a conversion chart above each of his pumps so that motorists can compare the prices charged per liter with the prices that had been charged per gallon.

Meanwhile, another local service station, the Quick Stop Foods and Gas station at 1325 Broadway, installed pumps Thursday afternoon that will register per gallon prices in excess of $1 -- a move claimed by a station employee to be a first for Cape Girardeau.

At that station, a distributor of Shell Oil products, an attendant said the station's new pumps that will register per gallon prices over $1 will be converted in the spring to the metric system.

"It's going to be a lot easier than doubling the price per half gallon," he said. The cost of a gallon of unleaded gasoline at the station has been more than $1 for more than a month now, he said.

While the installation of the new pumps at the station will allow the per gallon price to exceed $1, the conversion to the metric system is considered necessary because of predictions that the cost of a gallon of gasoline may reach $2 in the coming year. On a per-gallon basis, the station's new pumps can register only as high as $1.99 and nine-tenths.

Ervin "Wayne" Collins, manager of the Knight Oil Equipment Co. of Delta which provides maintenance for most of the service station pumps in Cape Girardeau, said that most stations here have not decided whether to install pumps that will record per-gallon prices higher than $1 or convert existing pumps to the metric system.

"Some of the big oil companies here are talking about it trying to decide whether to install a conversion kit or a pump to register more than $1," he stated.

"But they say that within a year a pump that will go up to $2 won't work. They say that won't be enough," Mr. Collins said, and noted that predictions of more than $2 per gallon in a year are still only rumors.

Mr. Collins said the metric system will eventually come to all service stations. "It's coming, but I'd be afraid to put a date on it," he said.