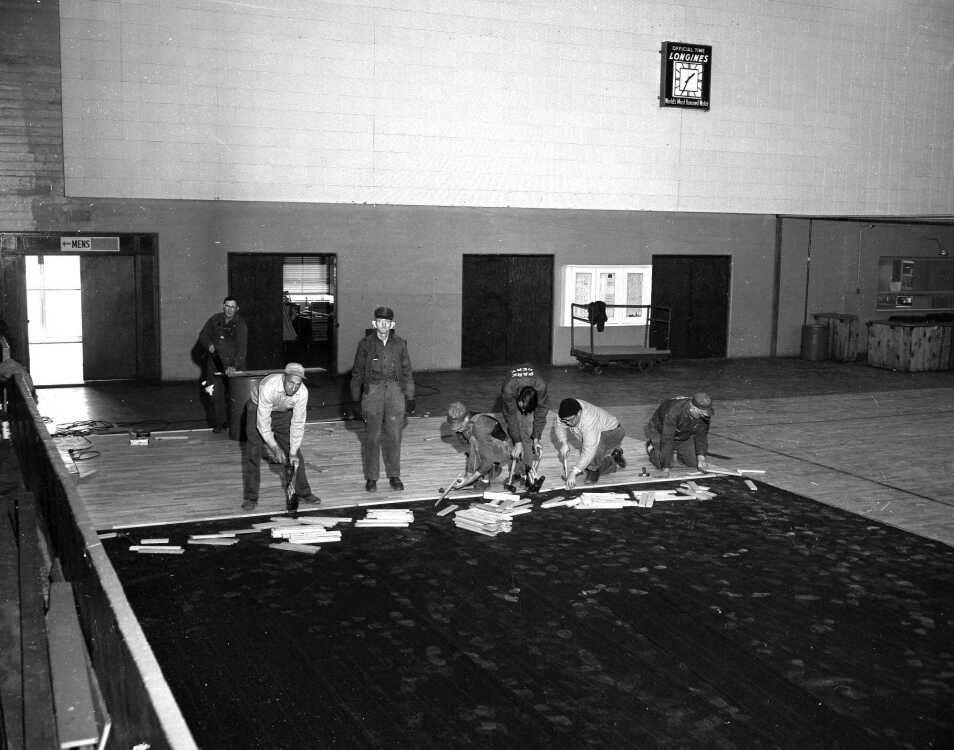 Workmen are laying the extended floor at the Arena Building. This particular phase of the job going on is at the southeast end of the auditorium. The new hardwood supplements are already in place over the center portion of the big room. From the left are Ira Clifton, Maple Craft, Bill Pleasant, Claude Stevens, Kenny Evans, Jim Jordan and Clyde Crites. (G.D. Fronabarger photo)

See this blog, WPA head sees progress at Community Center, for more links to blogs about the Arena Building.

The June 20, 1967 Southeast Missourian reported the first step in a renovation program of the Arena Building, as employees of the city street and fire departments began ripping out the wooden floor. Here is an excerpt:

Superintendent of public works, John Eldridge, and superintendent of parks, L.W. McDowell, said a backhoe machine was being used this morning, but a caterpillar may be moved in. The latter machine would crush the wood, which could then be loaded onto trucks and moved out.

This may prove a faster process, Mr. Eldridge said. He added that cost of salvaging the material is much greater than its worth.

After the floor is stripped to the concrete in the main auditorium, restrooms and foyers, a terrazzo floor will be installed.

Drury Brothers are the contractors. The job is expected to cost the improvement committee between $13,000 and $14,000 and is to be completed in about three weeks.