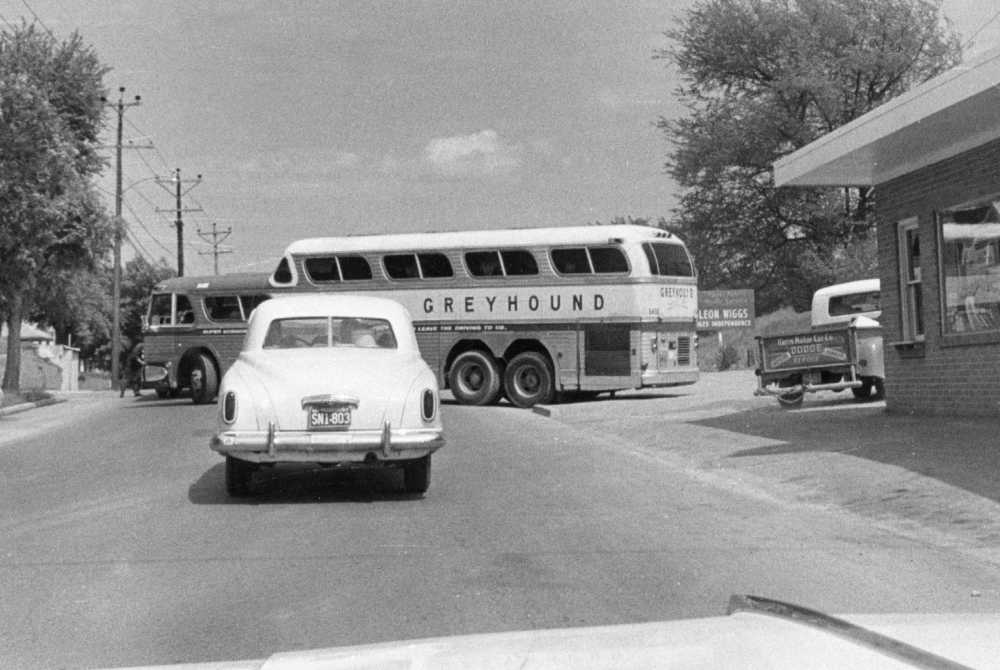 Traffic was forced to detour around this double-decker Greyhound bus when it stalled at its terminal on Independence street Tuesday afternoon. Motorists drove through opening between rear of bus and the station to get around until a truck arrived to remove the bus from the street. Congestion frequently occurs at the site when buses arrive and depart because of the narrow docking space and the volume of traffic carried by Independence.

The Scenicruiser was introduced in 1954. According to Wikipedia, the bus had some significant problems, particularly the drivetrain and cracking around the side windows in the rear quarter of the coach. In 1961 Marmon-Herrington rebuilt most Scenicruisers, a few having already been damaged in accidents. One major change was installing the newly-available Detroit Diesel 8V71 engine and a 4-speed transmission in place of the twin 4-71 engines and 3-speed transmission with 2-speed differential. Another change was adding side reinforcement plates above the rear wheels and below the windows. After the rebuilding a Super Scenicruiser badge replaced the Scenicruiser badge.

A close look reveals this bus in Cape Girardeau was a Super Scenicruiser.

The bus seated 10 persons on the lower level and 33 on the upper level.

Here is a YouTube video of vintage Greyhound Scenicruiser commercials. Watch for Groucho.