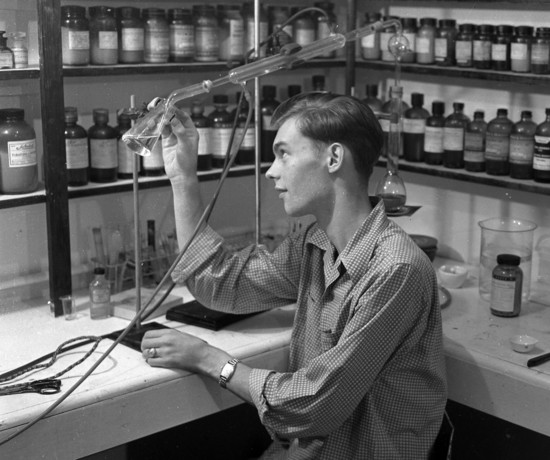 George E. Davis recognized photographer G.D. Fronabarger's son in photo #1: "I think this is Frony's son Bill, who had his own chemistry lab in the house." 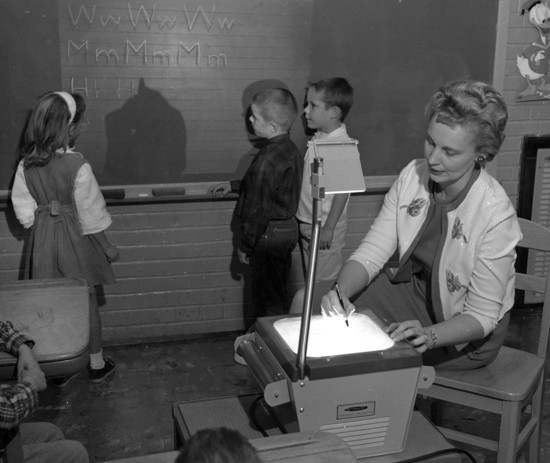 About photo #7, Jackie Glastetter wrote: "Keep the mystery photos and Cape history coming. I love to read about them. I have an answer for one of your recent photos....(The) unidentified teacher (using) an overhead projector to teach her pupils their letters, I'm pretty sure this is Mrs. Violet Heuer. She was a family friend and neighbor. VERY sweet lady. You can find her in the obits for 11/21/2011.Keep up the good work. We do read your articles." 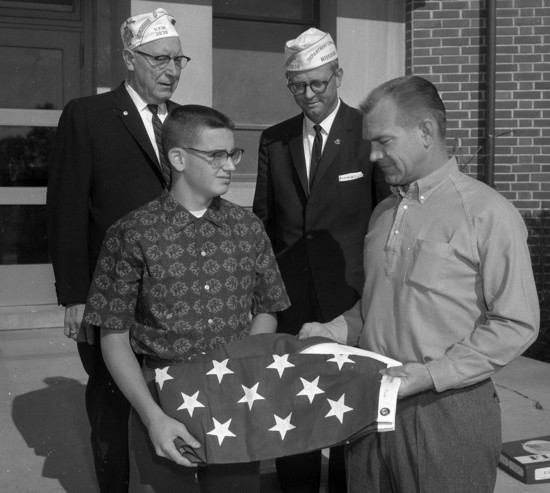 From Robert Brinkopf: "The student in the first picture getting the flag is Jim Reynolds CHS '64. I don't know what the occasion was or who the men are."

Steve C. (no last name): "I believe the young fellow holding the flag is Jim Reynolds, son of Dr. and Mrs. Garland Reynolds."

Gerald Johnson: "I am sure pic No. 1 shows Jerry Wilkening on right. He owned Landgraf Lumber Co. with his father-in-law."

Joe Stahly: "Jim Reynolds is on the left, and was a student at Central High School. His father was a ENT physician in Cape and Jim would have graduated about 1964. He was also on the golf team in high school. Thank you."

Bill Stone: "The student being presented the flag is Jim Reynolds, Central Class of 64 or thereabout."

We have found the picture was published May 2, 1963. Here is the caption:

A flag for a slogan, James "Jim" Reynolds, Central High School junior, receives a flag from Jerry Wilkening, Americanism chairman for the VFW post here for submitting the best Americanism slogan. The contest was sponsored by Post 3838. Looking on are John Penn, left, post commander, and Calvin Vogelsang, state commander.

A story published May 1, 1963 mentioned Reynolds' slogan: "America: Liberty our Tradition, God our Trust, People our Strength," which won over 235 other entries.

The flag was one of two that had flown over the nation's capitol in Washington that were presented to city schools, the other at Trinity Lutheran School, as part of the Loyalty Day observance.

Congress in 1958 named May 1 as Loyalty Day as a counter mover to the Communists' annual May Day celebration. 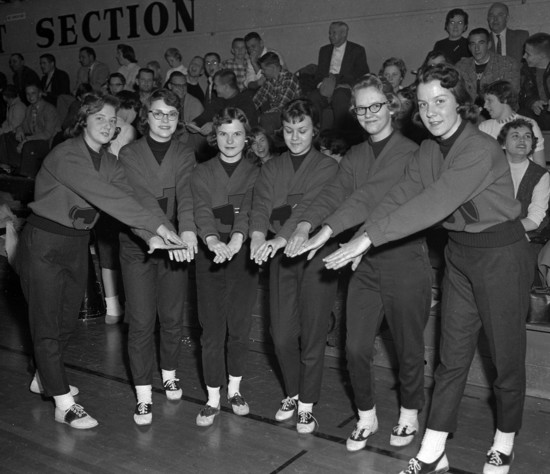 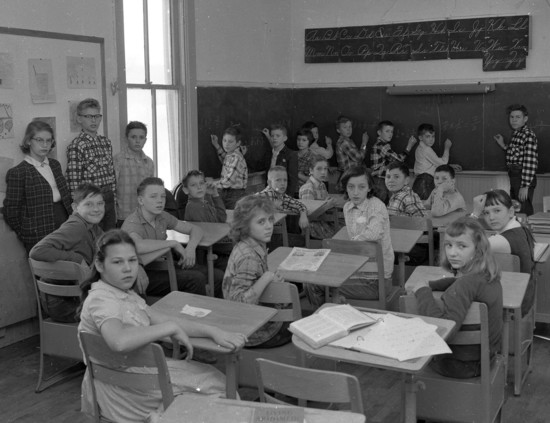 Ray Nichols of Arnold, Mo., wrote about photo #8: "The last picture of this week's Mystery Photos is of Juden School #1 and is from the paper of Feb. 4, 1956. I know because I am in it and have the clipping in a scrapbook. Since you are always talking about 'Frony' and his pictures, I thought I would send one along from a paper that I clipped out, also of 1956. Not quite the way most of us remember him."

(Picture of G.D. Fronabarger was taken in 1956 for the Sesquicentennial celebration's "Brothers of the Brush" whiskers-growing contest. Frony won a prize for his facial hair.)

Here is the caption of the Juden School photo from the Feb. 4, 1956 Southeast Missourian:

A day at Juden School. This is a scene in one of the two rooms of the Juden School, Cape Rock Drive, where fifth graders do their problems at the blackboard, a group of eighth graders (standing at the wall at the left) observe, and sixth graders study at their desks. At the blackboard and wall are Sharon Pender, Bill Palmer, Gary Sample, Gary McClard, Kenny Ervin, Wilma Jo Williams, Donald Griffin, Lester Sample, Ray Schwein and Donald Barks. Seated, back row: Francis Cannon, Edward Parks, Charles Cannon, Raymond Nichols and Janet Green; second row, Helen Parks, Ruth Koerber, Jane Reighly, Mike Lowes and Robert Adams, and in foreground, Loretta Ford and Carolyn Wilkerson.

Don Griffaw responded with this clarification:

"For the most part the article is correct, but there are some misspellings and one omission. I'm standing behind Wilma Jo Williams, the correct spelling is Donald (Griffaw). William Brockmire is standing next to me and is omitted from the list.

The other misspellings are: Ray Schwein, should be Ray Schweain, Donald Barks should be Donald Parks, Jane Reighly should be Jane Riley. I'm not trying to be picky, but several of these class mates are deceased and I felt the record should be set straight." 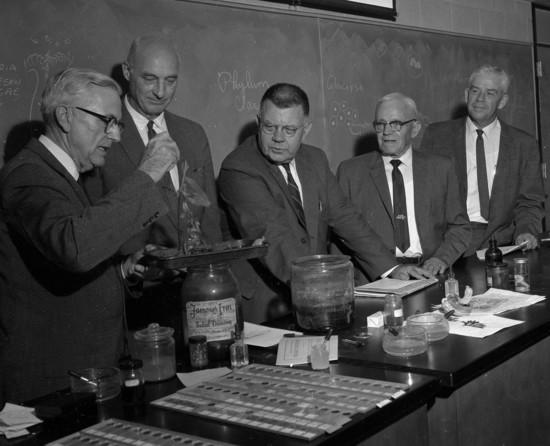 Edwin D. Gobson remarked on photo #4: "In photo #4 , in mystery photo gallery #48, I think the person doing the experiment is Prof. Homer Bolen, biology professor, and the fourth person from the left is Arthur McGill, professor of chemistry and head of the Department of Science (at Southeast Missouri State College). I am a 1951 graduate in chemistry and biology." 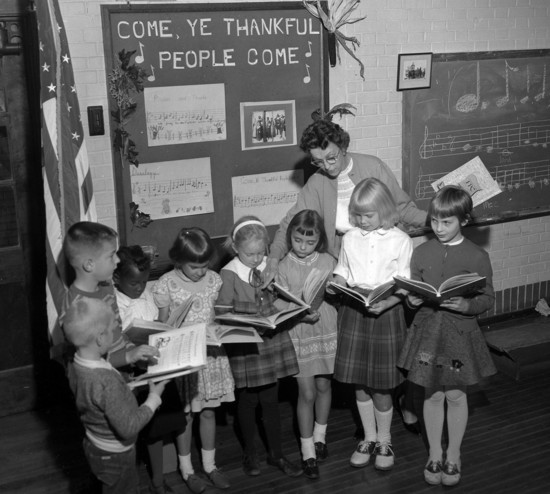 Sarah Seabaugh Shermann found herself in photo #5: "I may be wrong, but I'm pretty sure the mystery picture was taken at Lorimier School, now City Hall on Independence. (The) year was 1961 or 1962 or possibly 1963. The girl in the middle is Debra Buck with the white headband. To the right of her is Ruth Ann Looney, and the girl to left is Sarah Seabaugh -- me, when in kindergarten or first grade... The two girls to the far right were a year or two older.... The teacher looks like Mrs. Henderson (she lived in Jackson), and she was our first grade teacher. So I'm pretty sure the date was November 1961 at Lorimier School. The girls on the right side of the picture are a year or two older and I can't remember their names. I can't identify the three on the left side of picture, sorry. Hope this helps." 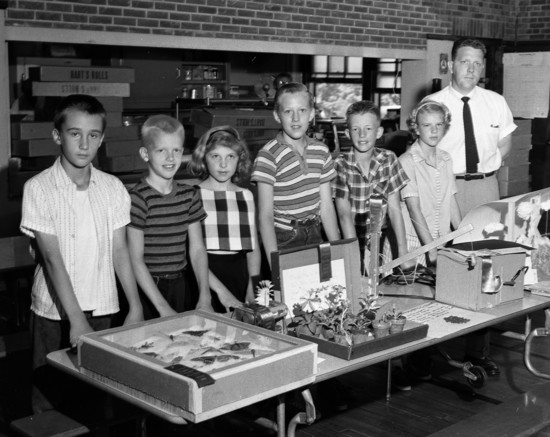 Jane Nicholas commented about photo #7: "I think the middle, taller boy in image 7 is my brother, Mike Rodgers. He went to Franklin Elementary School." 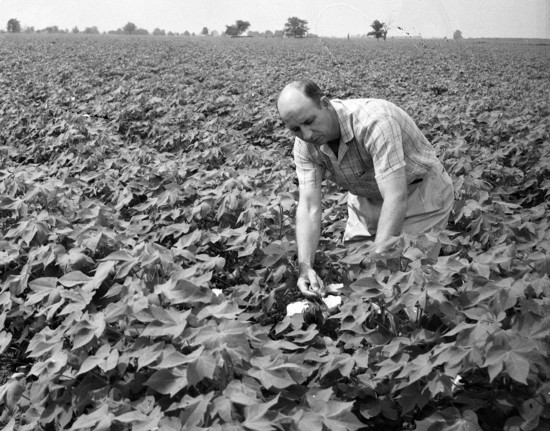 An anonymous writer explained photo #4: "I am pretty sure that photo #4 of gallery #49 is not a farmer examining his bean crop. It is Tom B. Stroup, University of Missouri Extension farm agent for Scott County. I knew him well! His daughter is Jana Jateff who lives in Cape. 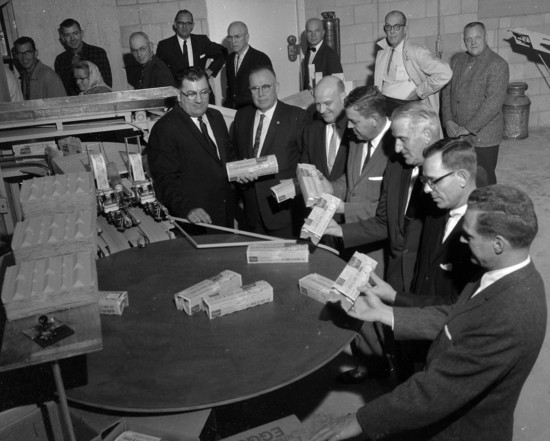 Jack Schulte III, R.Ph., of Peoria, Ill., was pleased to find his father in photo #6: "I was looking through the latest mystery photo gallery, and to my surprise when I saw photo #6, I recognized my father in that photo. He is in the back row, second from the left, John Schulte Jr. He was also a pharmacist and owned Jackson Rexall Drugs in Jackson. I thought it quite coincidental to see him in a photo at this time, since his birthday was March 3rd, but unfortunately he passed away around 25 years ago. Other gentlemen I recognize from the photo are Wib Lohman, last person on the right in the back row. He owned Lohman's Shoe Store in uptown Jackson. Also, second from the right at the table is Rich Davis, who was with Cape County Bank. I believe that indeed those were Kroger egg cartons. There was a Kroger egg plant on the north side of Jackson, that I believe was built in the early 1960s. Possibly this was a tour by a civic group, maybe the Optimist Club. Just to let you know, I really enjoy the photo galleries and look forward to the new ones. Perhaps sometime you could give information on some of the past ones after you get information about the pictures, I would think that would be of interest to people also. Thanks!" 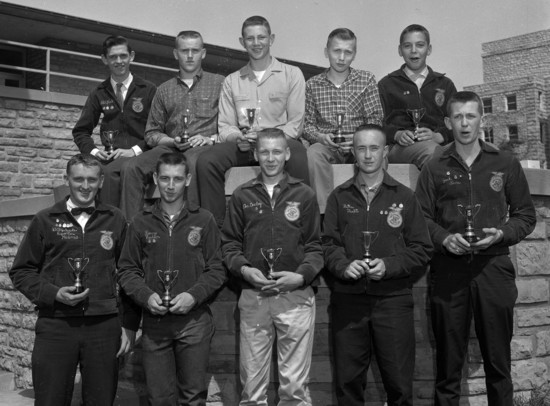 Reg Swan: "I recognize two people on the front row. The third from the left on the front row is Mike Conley and beside him on the right is Gene Hecht of Jackson High School around 1965."

Shirley A. Hecht: "My dad is the fourth person from the left in the front row. His name is Gene Hecht. He was a member of the Jackson FFA chapter. He graduated high school in 1964, so this would be from the early '60s. Ironically, he commented just this weekend about an award he won while in school, it's very possible this is a picture of that. Won't he be delighted to see it again. A friend of mine brought it to my attention."

Since this photo ran in the Mystery Gallery, we've located the image in our files. It was published April 8, 1963, on the front page of the Missourian with this caption: 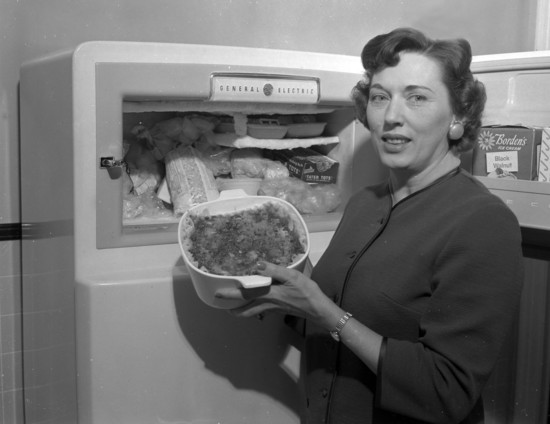 Martha Schott recognized the lady in photo #4: "The mystery photo on the front page of today's SEMissourian is a picture of Glenda Marshall. She was a home economics teacher at L.J. Schultz School (7th and 8th grades) in the Cape Public Schools in the 50's. She must have been doing some sort of cooking demo when this picture was taken. She was my home ec teacher and also a friend of my mother's." 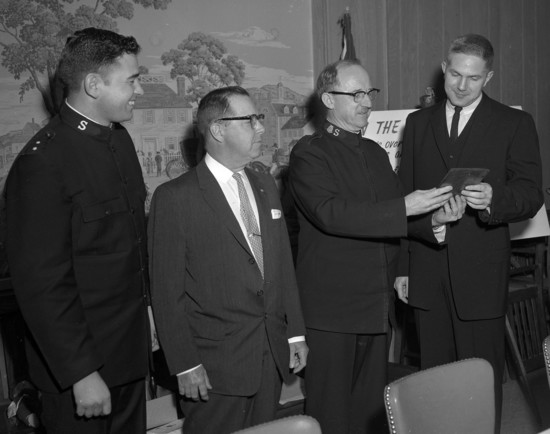 Harold Hager knew most of the people in photo #5: "The gentleman at the far right is Fowler Jones, who was chairman of the Salvation Army advisory board at the time. The officer at the left is Capt. Lee Hickam. Next to him is Dr. Nussbaum. The other officer is unknown. This information (was provided by) Fowler Jones." 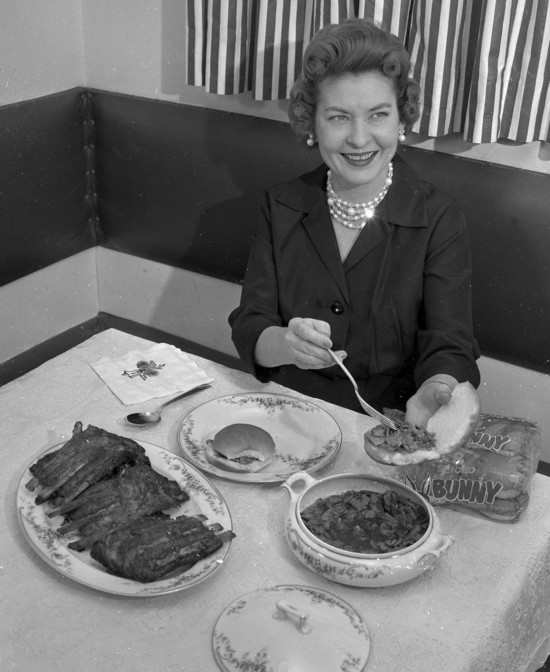 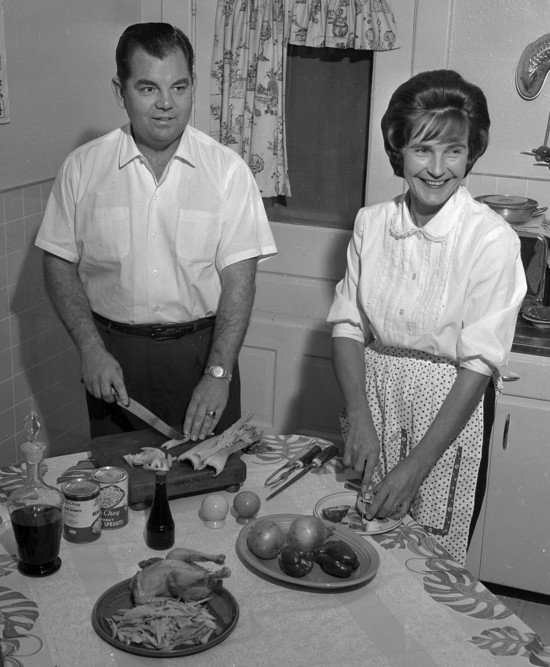 Jeff Brune: "My grandparents are the ones pictured cooking together -- Charles and Louise Brune. This is a picture of them making my grandma's famous chicken chow mein that everyone in town loved. The picture was taken in their kitchen on Luce Street in Cape. My dad probably could give you an approximate date. We all have copies of this picture. Thanks."

Jerry Wolsey of Chaffee, Mo.: "I believe photograph number 5 is Mr. and Mrs. Charles Brune of Cape Girardeau. I believe both are deceased now. Any questions please don't hesitate to contact me." 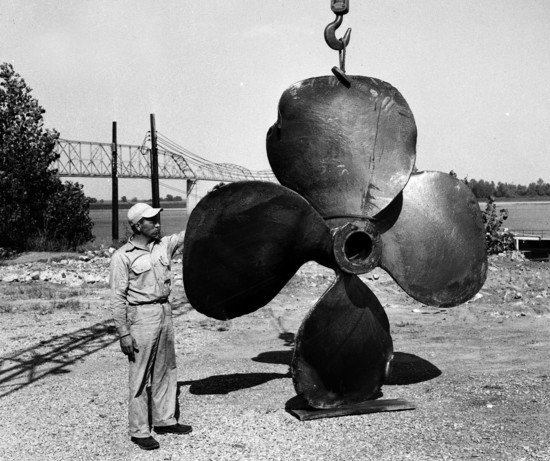 Pictures of the Past #3

The Missourian published this picture on Sept. 10, 1955: This large propeller, largest of the type used by towboats on the Mississippi River, is 6 1/2 feet across and weighs three tons. This particular prop is from the Blaske Line's Memphis Zephyr, one of the largest tows. Allen Reed, a workman at the Missouri Dry Dock & Repair Co., is shown standing by the big screw. It was brought to the local firm for repair after being considerably damaged in river chores.