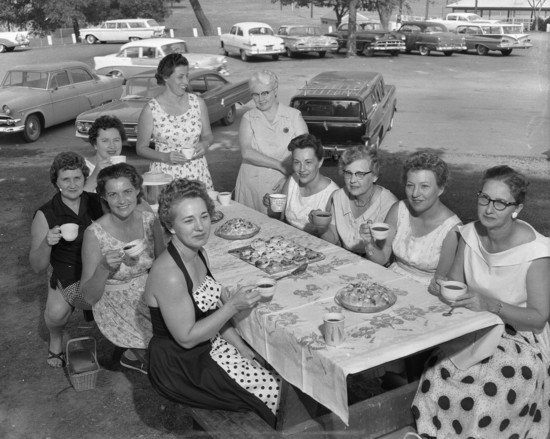 Jane Nicholas sent us information on photo #4: "In gallery #4, photo 4, I recognize two of the women. My mom (Bernice Rodgers) second from the right on the far side of the table, and Alberta Schaefer (I think that's correct), first lady on the right on the near side of the table. Our black Nash Rambler wagon is in the background so this was about 1958 or 1959. The Rambler was new in '58 and sold after a couple years. My mom belonged to a 'coffee group' that met at various locations around Cape. I really enjoy these galleries." 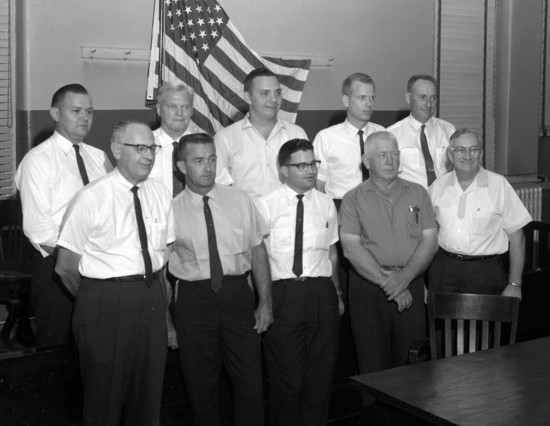 Bev Halter Peterson commented about photo #4: "I think the man in the middle of the first row (dark hair, white shirt and glasses) is Bill Rose, county tax collector. We lived next door from 1959-65 when I was a child, so my memory is not too clear about him." 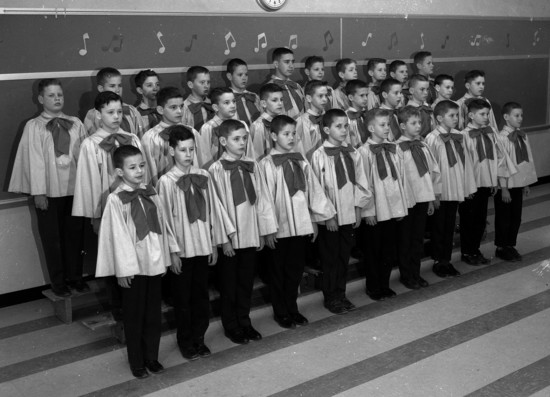 The Rev. M. Kim Smith, senior pastor of Community Hope First Church of the Nazarene in Clarksville, Tenn., recognized himself in photo #5: "The boys choir on Mystery Photo #25 is the 5th and 6th grade choir at Jefferson School in the 1962-63 school year. My name is Kim Smith, and I am the first boy on second row from left. I was in the fifth grade. I remember several of the other boys' names, if you're interested. I live in Tennessee, and my brother found this picture while surfing the archive. Not sure I have ever seen it before. Thanks. My grandchildren will get a big laugh out of it." 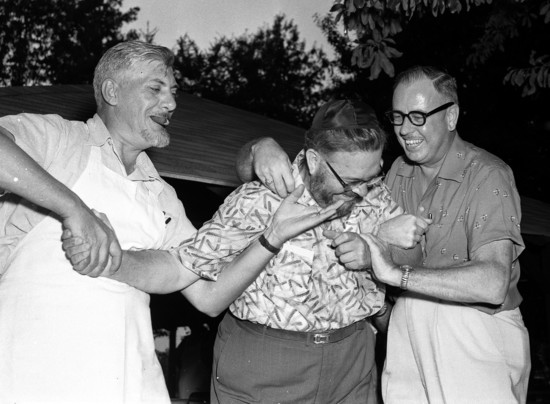 Julia Unnerstall recognized her grandfather as one of the men clowning around in photo #7: "My name is Julia Unnerstall, and I can identify a man in two photos. My grandfather, David Graves, is pictured in both. He was the manager of Montgomery Ward from approximately 1950-1969. He was very active in the Downtown Merchants, Chamber of Commerce, Salvation Army and Kiwanis. He held leadership positions in some, if not all, of these as a volunteer and member. My grandfather is the gentleman on the far right with no facial hair in Photo Gallery #35, photo 7.

He is also pictured in Photo Gallery #36, photo 1, the tall gentleman, standing second from the left. (photo below)

"My grandfather was a respected and smart man. I heard him speak of Mr. (G.D.) Fronaberger many times. I certainly enjoy the Mystery Photos and news items from the past. The Unnerstall side of my family dates back to the 1850's, so I always look for connections. I appreciated the interesting photos and information. Thank you!" 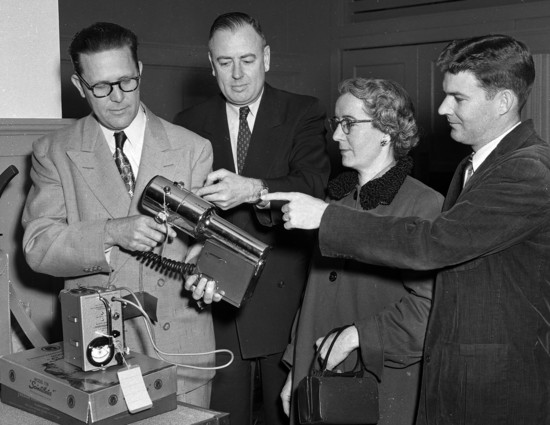 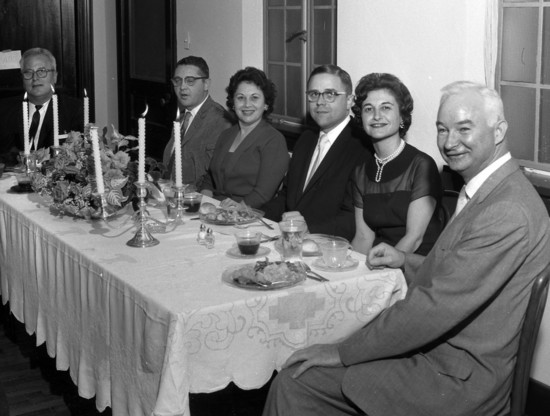 We received a couple of comments about photo #7, which was taken at the B'nai Israel Synogogue on Main Street in Cape Girardeau.

Rob Lewis said: "The woman to Marty Hecht's left is his wife, Tootie." She's second from the right in the photo.

Also about that photo, brothers Chuck, Larry and Ray Blitstein put their heads together and provided more information. Ray Blitstein wrote: "I sent this photo to my brothers, Chuck and Larry Blitstein, and this is the response I received... (From Chuck): Yes, it appears to be in the synagogue, perhaps some type of 'board meeting'; e.g., B'Nai B'rith, Israel Bonds, Federation, etc. Don't know the guy in glasses at the end of the table facing the camera -- maybe he was a guest speaker or presenter, but on his left is Hy Rubin and his wife, Sylvia (?) from Cairo, Ill., Marty and Tootie Hecht, of course and Hy Ruffman." 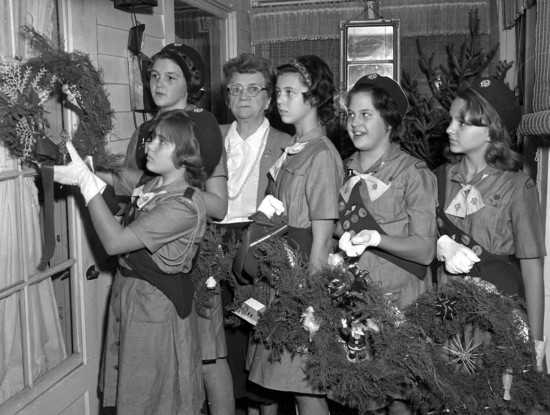 Jane Nicholas saw herself in photo #3: "I was in photo #3 in Gallery #40. We were a Junior Girl Scout troop in Cape. We made and distributed the wreaths to nursing homes in the area that Christmas. I believe it was around 1964. I don't know the name of the older lady in the photo, but the girls are, from left to right, Linda Nations, Karen Hale, Donna Hitt, Martha Foster and me, Jane Rodgers Nicholas." 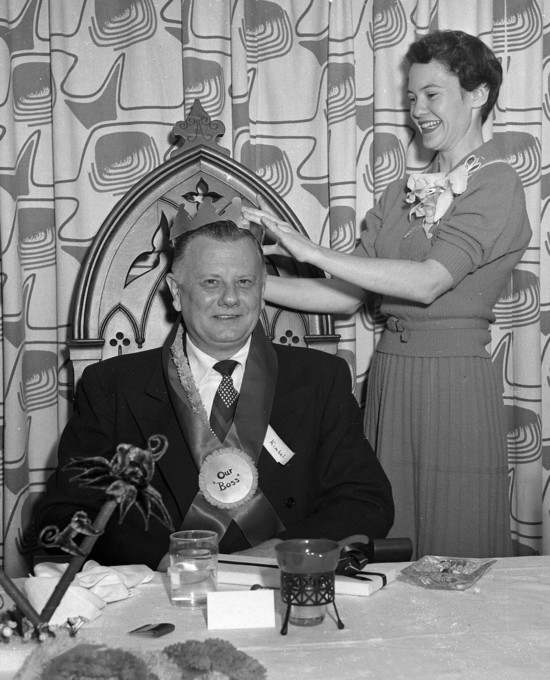 About photo #1, Lucille Hill commented: "I would say this is 'Crowning the Boss' on Boss Night by Girardot Secretaries. May God Bless You!" 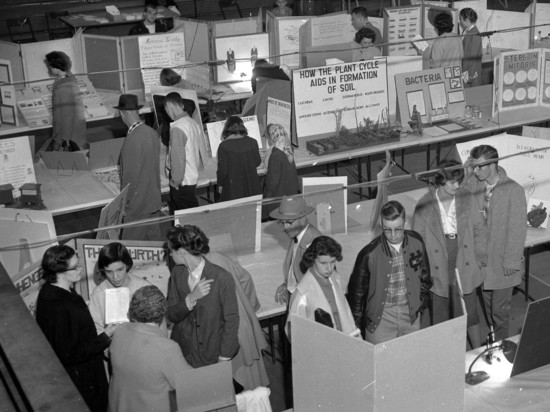 Ray Nichols of Arnold, Mo., wrote us about photo #3: "In today's Mystery Photo set #42, photo #3 shows the Science Fair at Houck Field House. The boy in the front of the picture wearing a College High letter jacket is Joe David James, a fellow student at College High, who graduated with me in 1962. We played basketball together on probably the worst team in the history of the school. Unfortunately, Joe died at an early age on October 16, 1968, of cancer. Thanks for the photos." 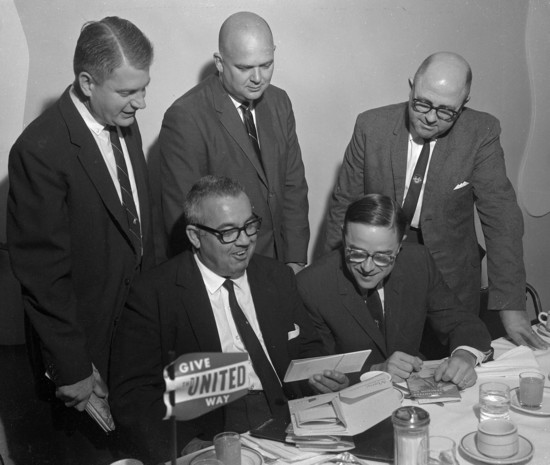 Michael Edwards had this to say about photo #2: "I believe Marty Hecht is seated on the right and Luther Hahs is standing on the far right."

Bill Stone concurred: "I am sure you have heard from many on this photo. First gentleman is a Lamkin, my guess Jack. The last on the right standing is Luther Hahs. I think the gentleman seated on the right is Marty Hecht." 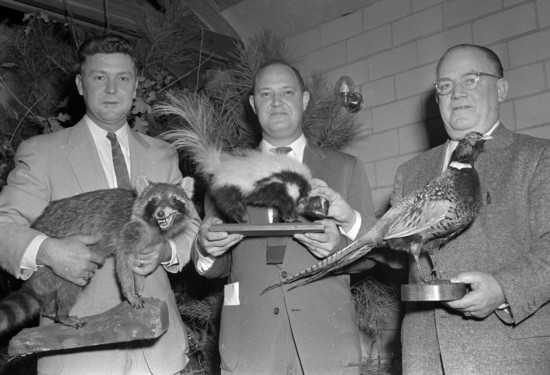 About photo #1, Alvera DuBois wrote: "The three gentlemen are Jim Young, Jack Brinkman, and Ed Biehle. None of these gentlemen are alive anymore. They lived in Perryville. However, Mr. Brinkman moved to Cape and was a salesman for Auto Tire & Parts. Mr. Biehle was president of Home Trust Company of Perryville (now US Bank), and Mr. Young was associated with Young & Sons Funeral Home." 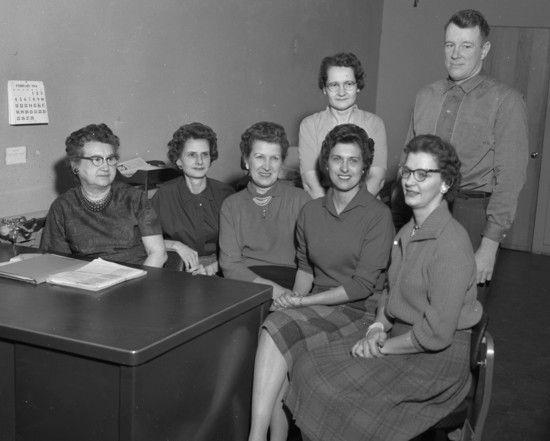 A number of people commented on photo #2.

From Jim and Phyllis Hansen: "The man is Norman Weiss. He worked for the Farm Service or SCS - something like that in Jackson."

From Mike W. Weiss of Shreveport, La.: "That's my father in mystery photo #44, Norman Weiss. He was manager of the Cape County ASCS Office in Jackson. The lady seated in front of Dad, her last name was Bollinger. Her son (Brent) was about my age. The seated lady in the middle is a Brinkopf. I can't remember her first name. The seated lady second from the right is still alive I believe that her first name was Jeanette. Last fall, Mom said that she was the only one still alive."

Victoria Michael: "The picture with the women in the office setting with the calendar and one guy standing.... The man is Norman Weiss, who passed away a year or so ago. His wife Viola is still living. His son Chris is an attorney in the area. Jackson, I think. He went to Hanover Church and was somehow connected with the Missouri Farm Extension or something like that. He was on the board at the Lutheran Home. I'm guessing the picture is of his office staff or people who worked for/with him there. I'll bet Chris or Viola could help you identify the others."

Donna Heuer: "The gentleman is Norman Weiss. He was a manager at the ASCS Office in Jackson. I'm guessing the ladies worked in his office."

Robert Brinkopf: "Picture 2 of 8 from 1962 is the office staff at the Cape Girardeau County ASCS (US Dept of Agriculture Stabilization Conservation Service) office. Front row pictured left to right: Marydell Lear, Mrs. Ann Schade, Mrs. Edna Brinkopf (my mother), Ms. Anna Lou Overbeck, and Mrs. Jenette Bollinger. Back row is Mrs. Madonna Fellows and manager Norman Weiss. Norman Weiss passed away two years ago. At that time Ms. Overbeck and Mrs. Bollinger were still alive. Norman's wife Viola is still living. All others are deceased. They all became very close friends over the years and got back together after many had retired. 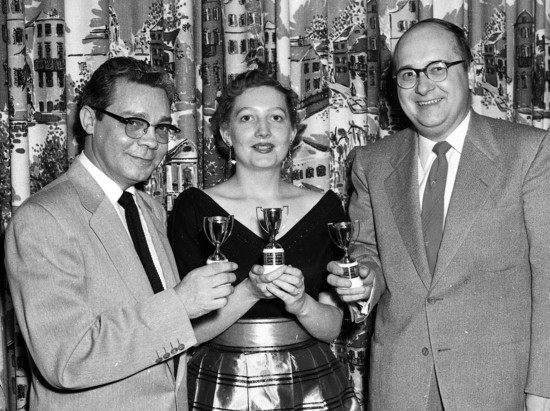 Photo #3 proved popular. Virginia Goodwin noted: "The lady in the middle is Lou Dorlag, wife of Art Dorlag who taught at the university in the theater department back in the '50s. The man on the right in the photo is Ray Burneson, who taught at the old training school and was very active in theater. This was most likely an awards dinner for the Little Theater group which was very active during that time. The man on the left in the photo looks very familiar, but I cannot recall his name. Hope this is helpful.....I enjoy seeing these each Sunday."

Barry Hazen had all the answers: "I can identify the man on the left in the picture with three people. The man on the left is my father Earl E. Hazen. I also remember the lady in the middle and the man on the right. If I heard their names, I think I would remember that too. They were in a group that put on plays on the stage at Kent Library, The Little Theatre. My name is Barry Hazen and I used to do makeup for some of the plays. My dad and I were in one of the plays called 'The Twelfth Disciple.'

"I decided to go look for my fathers scrap book. I found it and I also have the original photo of the mystery photo, with identification on the back. The picture was March 20, 1955. It was taken at the awards dinner for the group called Community Theater. From left to right, Earl Hazen, Best Supporting Actor; Lou Dorlag, Best Actress, and Ray Burnison, Best Actor. 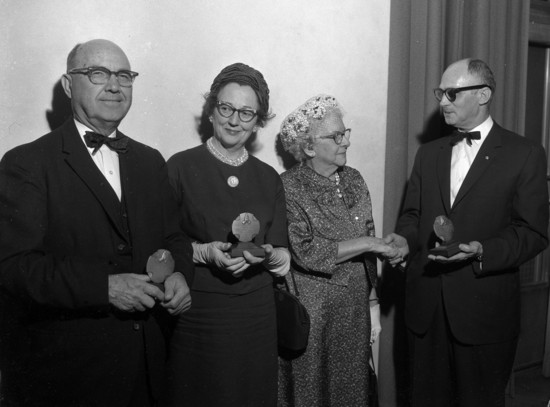 Mike Masterson: "The man on the far right in photo #7 with Mr. (Rush H.) Limbaugh is R.A. Fulenwider from Jackson."

Donna Heuer: "I think the gentleman (on the far right) is R.A. Fulenwider of Fulenwider Drugs, Jackson."

Bill Stone: "The other gentleman to the right on the photo with Rush Limbaugh Sr. is the late Roland Fulenwider from Jackson. You can take it to the 'bank' for sure."

Peggy Kuehle: "The woman next to Rush Limbaugh Sr., in the mystery pictures is Mrs. Arthur Deneke (Cora). 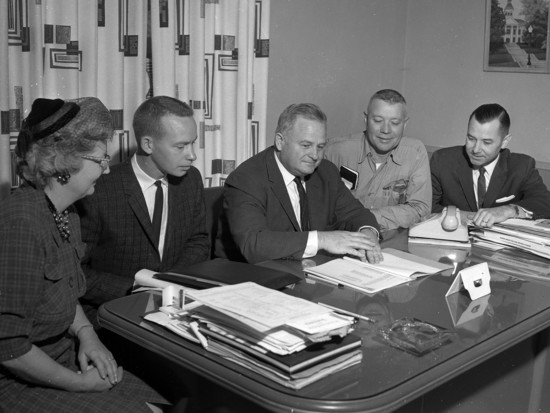 Jim and Phyllis Hansen commented about photo #5: "To the right of Mayor Walter Ford is (Brownie) McBride, who was in charge of the parks or at least the swimming pool."

Also about photo #5, Rob Lewis contributed: "Far right is Ray Vogel. All of these folks are my parent's generation."

Shirley Palen noted: "Pictured in picture #5 (group with Mayor Walter Ford) on the right at the end of the table, I believe, is Attorney Ray Vogel. 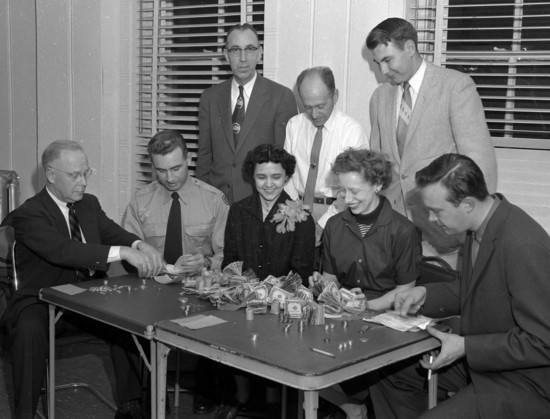 Connie Lowden recognized two of the people in photo #7: "The lady (fourth from left) is Louise Steimle. The gentleman standing in the middle is Raymond Richie. Both took care of me for years after I was stricken with polio. They were therapists at the old St. Francis Hospital. Wonderful people!" 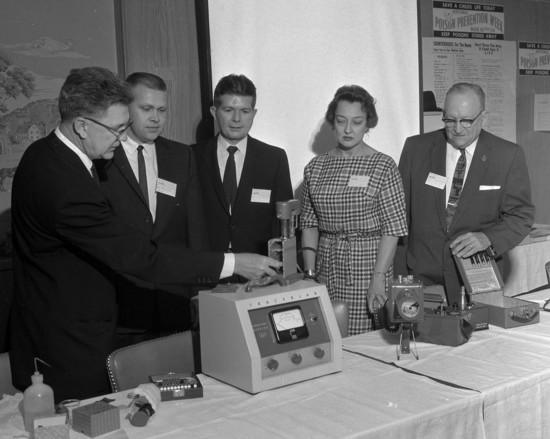 Charley Herbst: "The man in the middle looks like a young Ken Mehrle, who owned Medical Arts Pharmacy."