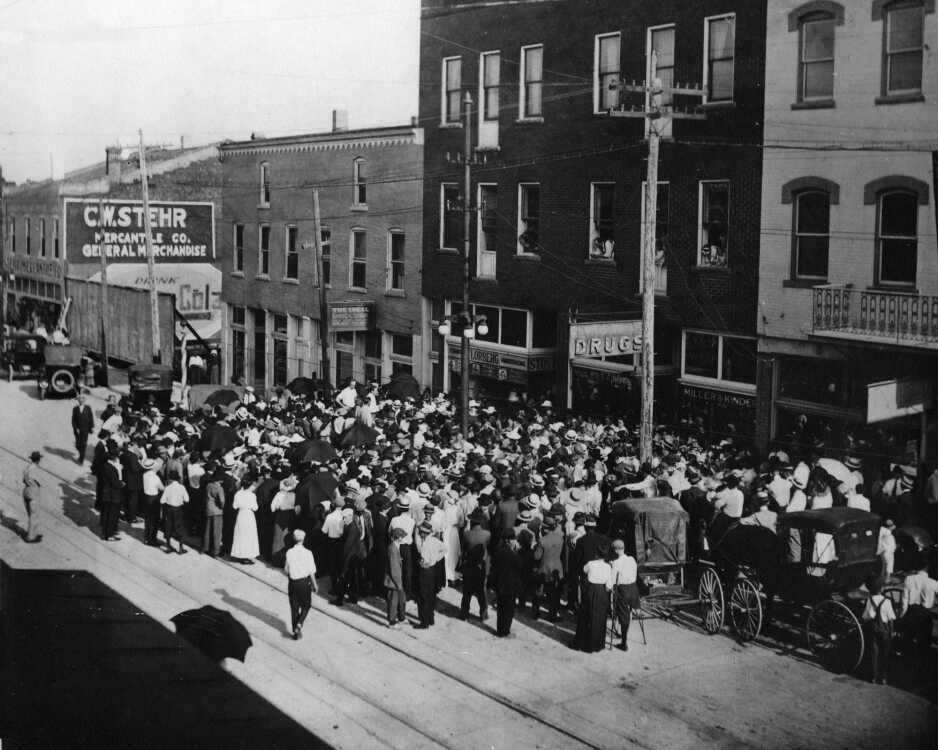 Hundreds of people gather outside Lorberg Furniture and Undertaking Company at 625 Good Hope Street for its grand opening June 23-24, 1916. At left, the Orpheum Theater west of Stehr Mercantile Co. is under construction. Other visible businesses include The Ideal Shop and Miller & Kinder Drugs. (Lueders Studio photo)

Despite the fact that rain fell in torrents most all afternoon and night Friday, about 500 persons visited the opening at the Lorberg Furniture & Undertaking Company on Good Hope street.

Following the announcement made in The Republican Friday afternoon that the store would remain open that night, hundreds of people visited it and witnessed the demonstration of the new Peninsular stoves and ranges.

Mrs. Lillian Clark Thornton is demonstrating in cooking and baking. Every visitor to the store was given a sample of the baking.

This afternoon a tremendous crowd visited the store. It was believed that several thousand called during the day. At 4:30 o'clock several prizes, one of which was a Peninsular combination range and stove, were given away.

A crowd estimated at 1,200 people were present at the drawing for 11 prizes at the opening of the Lorberg Furniture & Undertaking Company at 4:30 o'clock Saturday afternoon. The drawing was held in front of the store and the crowd surged out over the street from the Stehr Mercantile Company to the corner of Sprigg Street.

Every adult person who visited the store Friday and Saturday, opening days, were given coupons which entitled them to a chance on each article, and more than a thousand of each were given out. There were also many visitors to the store who did not take the coupons. It is believed that fully 3,000 persons visited during the two opening days.