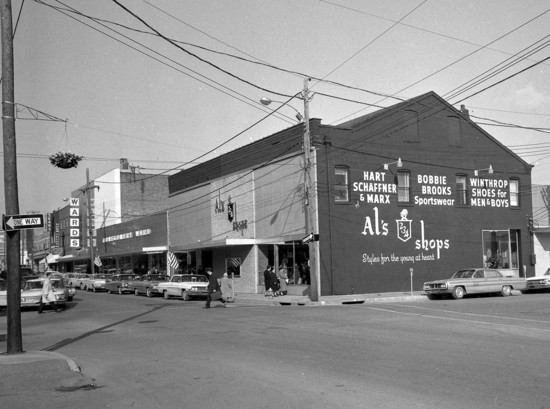 Note the hanging basket of roses on the utility pole.

The clothing store later became Oglander's which was destroyed by fire July 6, 1969. See story below. Robert Oglander was owner of the store at the time. The store relocated across the street to 15 N. Main.

The business was acquired by Bill and Venieda Reynolds in 1976. 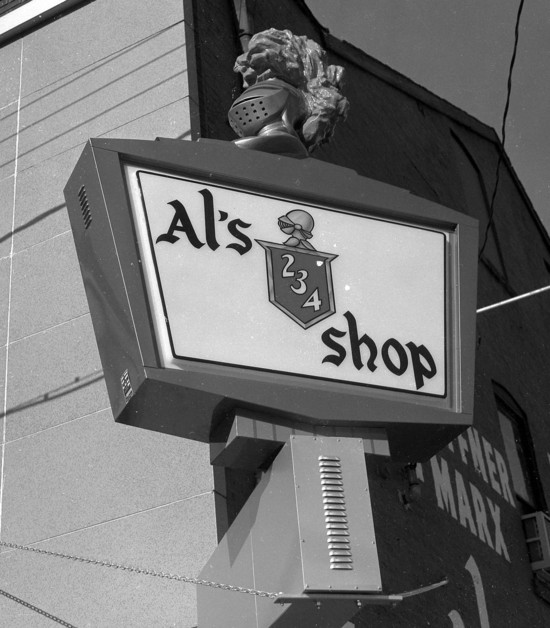 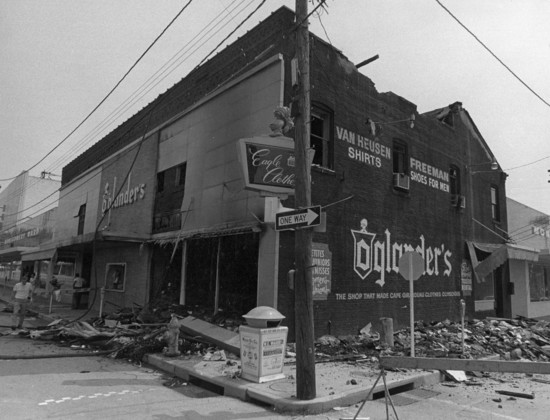 The blaze at Oglander's, 2 North Main, burned a third of the width of the first floor of the building, the fire spreading under the roof along the south side.

"A small part of the roof on the south side of the building fell into the middle of the fire. Also most windows were cracked by the heat and two large windows broken out on the south side," he said.

Chief Mahy said the blaze was discovered by an off duty cab driver who drove to the main fire station after observing smoke rolling from the building. The man discovering the blaze, Jim Kiger, is employed by Yellow Cab Co.

Flames were confined to the south section of the store, the area devoted to women's apparel. This is divided by partition from the men's clothing section.

Most of the dresses near the south wall were destroyed in the fire and all other clothing in the store including the men's wear on the north side and the clothing on the second floor storage area were damaged by smoke.

The fire was brought under control about 7 Sunday morning. Chief Mahy said three pumpers, one aerial ladder, and two auxiliaries were used in fighting the blaze.

"We called out all off-duty firemen to fight the blaze. I think we were fortunate that the fire wall separating the store from the Montgomery Wards store held. Too, we were able to confine the fire damage, including smoke, to the clothing store and the fire to the south wall," he said.

One casualty of the fire was a popular resident of the store. Caesar, the talking mynah bird. The black-plumed bird was a familiar sight in his cage near the store's Main street entrance for some time. Firemen said the bird suffocated in the heavy smoke.

This morning the fire scene resembled a blackened shell, as carpenters finished boarding up the front and side of the store.

Clothing in the men's store, soiled and wet from the firemen's struggle to contain the blaze, hung on manikins in the north window. Most every fixture was blackened by smoke as were all the walls and carpeting in the establishment.

Clothing in the women's section and on the second floor that had been hung on plastic hangars lay on the floor after the hangars had melted in the intense heat.

Outside, on the south portion of the store, the Independence street section, barricades have been placed by the street department to ward off the danger to passersby of debris falling from the south wall.

The owner of the store, Robert Oglander, was unavailable for comment this morning in regard to rebuilding plans. The building itselt is owned by Marie Kennedy of St. Louis.

Lynn Smith, an employe of the firm, said he was unable to say this early what the exact losses would be until a check on inventory records could be made.