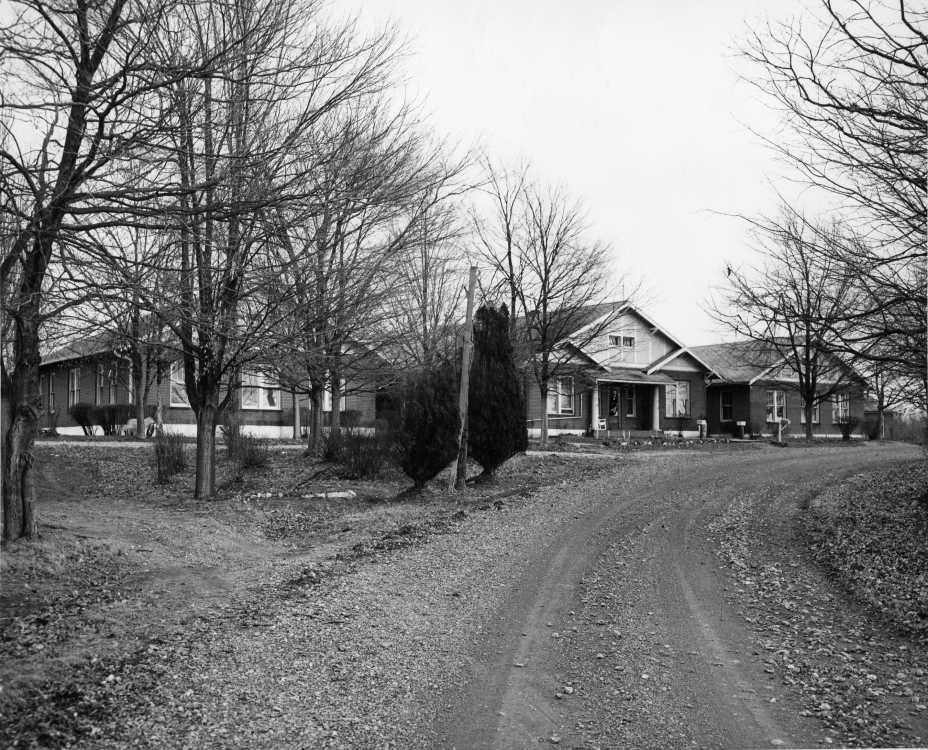 The Cape County Farm Home is seen in 1952 on Highway 61 between Cape Girardeau and Jackson. (Southeast Missourian archive)

Cape County's 80-year-old County Farm, a financial liability from the beginning, will cease to function as a home for the indigent and aged within the next few weeks.

Decision to end the function for which the farm was obtained in 1875 was made several months ago by the County Court, which has worked with the Cape County Welfare Office to find places for the residents of the farm to live.

Only three persons now use the farm, and places have been found for them in nursing and boarding homes in the county. As soon as the necessary approval comes to the welfare office from its state office, they will be transferred.

County authorities view the move as a consequence of the development of old age assistance payments and also of the federal social security program.

Through the years the number of aged using the farm has gradually diminished from a high of 32 in the depression years of the 1930s to an average of less than half that number in recent years.

Old age assistance grants up to a maximum of $55 a month have helped many old people keep their own places rather than enter the County Farm. Social security payments, toward which they have contributed since the act became effective in the late 1930s, have helped others to help themselves.

The greatest number of residents at the farm this year was 11 in February. As the court went about gradually reducing the number, it dropped to seven in October, then to the present three. No additional residents have been taken since the decision was made.

Peak number of persons living there in the postwar period was 30 in November, 1947. Thereafter it fell off until it has averaged about 15 in the last few years.

Expenses of operation have been high. County Clerk Edwin J. Sander reported that total operating costs in the five-year period from 1950 through 1954 totaled $49,538. Income during that period was $11,915.24 from farm operations.

He noted that part of the cost of operation included capital investment for farm equipment and also miscellaneous repairs and painting to keep the property up. The main building and grounds are in excellent physical condition.

Mr. Sander said to his knowledge the farm had never been operated at a profit.

For this fiscal year the court established an $8000 operating budget for the farm. Out of this sum, $2000 remains with one month left in the year. Salaries are in addition to the budget amount, Mr. Sander said.

Mr. Sander said there had been a belief for several years that the County Farm should be abolished because it was too expensive to operate. He recalled that when L. H. Schrader was county clerk several years ago he recommended it be converted into a tuberculosis sanitarium for southeast Missouri patients.

Aged people who live at the farm cannot obtain old age assistance, he said, and the cost of maintaining them rests entirely on the county. But most of them can qualify for the $55 a month grant if they do not reside on the county property.

The state also pays grants to those who are permanently and totally disabled, and some of the residents have fallen into this category. They cannot receive the $55 a month grant from the state as long as they stay on the farm.

Consequently, Mr. Sander said, the cooperative program with the Cape County Welfare Office was worked out and the agency has found boarding homes or nursing homes, principally the latter, in which residents will live. They receive the state assistance which is generally sufficient to care for their needs.

In cases where the cost is in excess of the state sum, Mr. Sander explained, the county supplements it with an additional $15. Some instances, particularly where medical care and medicine are involved, take more.

He pointed out that these patients could be cared for at lesser expense in this way than by continuing to maintain the expensive County Farm. There the county has been responsible for all of their needs.

Mr. Conley is in charge of farm operations on the 260-acre tract of ground. Last year, he said, the farm grew 15 acres of wheat, 25 acres of corn, 10 acres of soybeans, 20 acres of barley, 20 acres of lespedeza and 10 acres of clover. It made 1000 bales of hay. All proceeds from sale of farm products goes to the county.

There are 50 acres of woods on the farm and some 40 acres of wild pasture. The farm property consists of the large brick main building, a large barn, chicken house, machine sheds and a hog house.

Mr. Sander said that the County Court has no intention of abandoning the farm. A caretaker will continue on the place and will be paid by the court for keeping it in maintenance and for operation. Negotiations are underway between the court and Mr. Conley for him to continue.

The large brick building in which residents have been housed is in excellent condition. It is commodious with 10 large rooms approximately 30 to 33 feet long and some 24 feet wide. The superintendent's quarters consist of five rooms. There are five baths in the main building, one in the superintendent's quarters and another without fixtures. A septic tank handles sewage.

The property later became the State Training Center for Handicapped Children which occupied it for about 20 years until 1977. It moved to the new Parkview State School that was constructed in Cape Girardeau.

Then the Cape County Senior Citizens Nutrition Center moved into the facility at the park. When it moved to the Civic Center on Broadway in 1986, the structure was demolished.