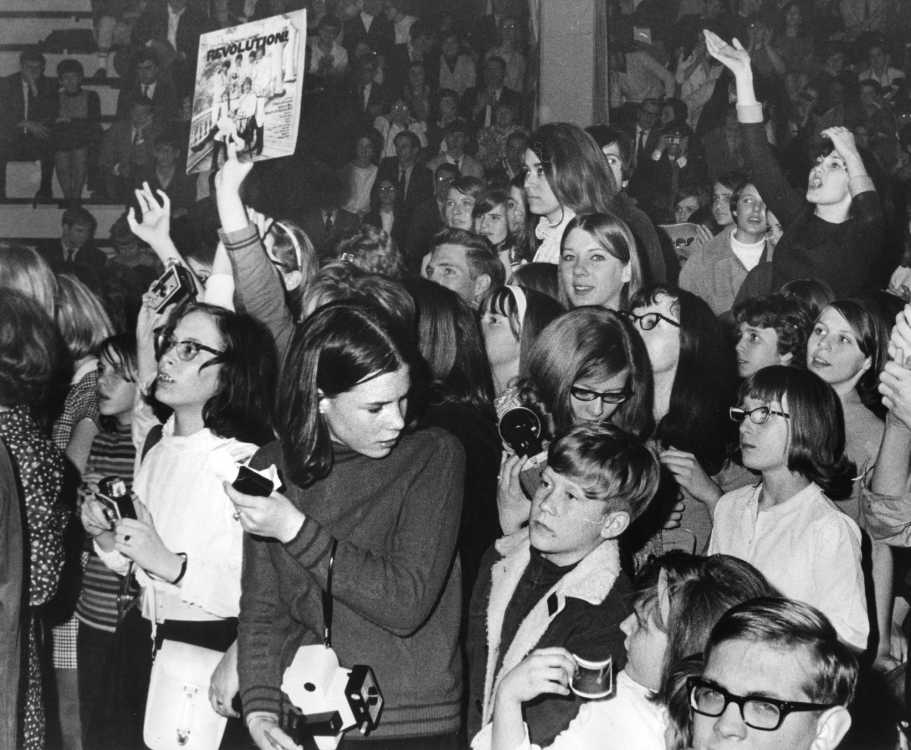 With cameras in hand, record album covers held high and rapt attention showing on their faces, teenagers listened and shouted their approval of Paul Revere and the Raiders at the Arena Building on Feb. 14, 1968. An estimated 3,500 young people shoved and crammed their way into the building in what was said by some to be the largest crowd to attend an event there. Doors were broken and glass was smashed in the crush of youngsters. (Missourian photo by Bill Hampton Jr.)

"It was probably the biggest push in the history of Cape Girardeau."

Just a comment from an adult at the Arena Building Wednesday night observing the 3,500 pushing, screaming, swooning teenagers attending the concert of the popular "Paul Revere and the Raiders."

The crowd began gathering at 3:30 in the afternoon and unable to contain their enthusiasm, pushed the glass out of three of the front doors before the scheduled opening time of 7.

Nine police officers were on duty. One youth cut his leg when the "rear forces" shoved him against the broken glass. But this didn't stop him from seeing the concert. He handed his ticket to the collector at the door, walked in and found a seat. His name was not learned, officials said.

The Inter-Dormitory Council sponsored the concert.

Carroll D. Walker, dean of students, said he had never seen an entertainment group more well-received. Among other things tossed to the audience as souvenirs were fragments of a guitar broken into pieces by Mark Lindsay, who heads the Raiders.

Dean Walker said primarily, it was junior high and high school pupils who were first in line around the doors.

L.W. McDowell, park superintendent, stated the sponsoring organization will pay for damage to the doors estimated at $250. These are terms of the contract signed with any group wishing to use the city facilities, he added.

Mr. McDowell said seating capacity is about 3,000 in the Arena and the remainder of the audience was standing in any vacant spot they could find.

A brief article published Feb. 12, 1968 noted the concert was a Valentine show sponsored by the Inter-Dormitory Council. Also to appear with the Raiders were the Exiles, Freddie Cannon and Brian Hyland. Transportation for college students was to be provided from the divide in front of Academic Hall.

Mark Lindsay will be 71 years old on March 9.

It was reported in 1949 that a record crowd of 2500 people squeezed its way into the Arena for the semi-finals of the regional basketball tournament.