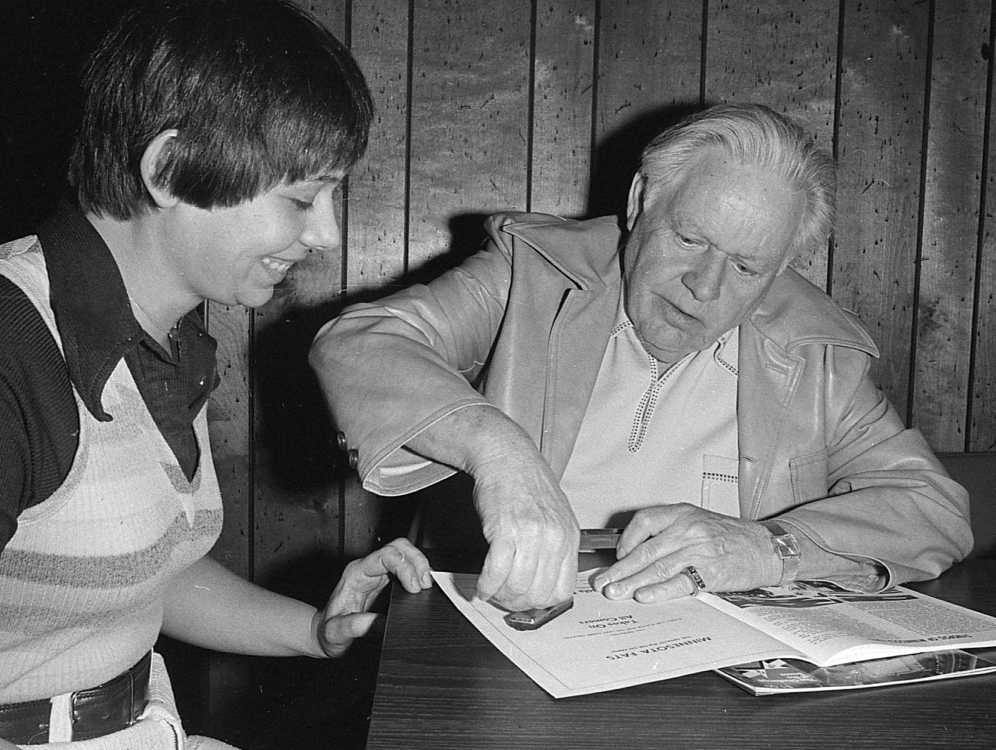 Rudolph Wanderone, better known as Minnesota Fats, takes time out of a busy schedule to visit with old friends in Cape Girardeau over the weekend. Above, he affixes his stamp signature to a booklet at Colletti's Restaurant, for Mrs. Jerry Colletti. The Colletti's--Jerry and Rocco--are old friends of Minnesota Fats. (Fred Lynch photo)

What can you say that hasn't been said about Rudolph Wanderone?

So, who is Rudolph Wanderone?

Sports fans may know Wanderone by a more familiar name.

Reams and reams of copy has been turned out on Minnesota Fats, and his name became a household word more than a decade ago when Jackie Gleason played the part of the billiards "shark" in a movie, "The Hustler."

Minnesota Fats, who now makes his home in Dowell, Ill., was in Cape Girardeau Saturday evening.

"Just passing through," he said. "I've been participating in an "all comers" tournament in Little Rock, Ark."

While passing through, Minnesota stopped off for dinner at Colletti's.

"Rocco and Jerry (Colletti) are good friends of mine," he said. "I knew them when there were at DuQuoin, Ill."

Minnesota Fats, who is now 80 pounds under his regular weight of about 280 pounds, recently participated in the "Battle of the Sexes" sports competition, which will appear on national television.

He was paired against the top lady billiards player, Jean Balukas, a schoolgirl from Brooklyn, N.Y., who was played the game since she was four years old.

Mosconi is a familiar name to billiards fans. He has captured national men's billiards titles many times.

How did Minnesota fare against Miss Balukas?

"I've never lost a match I wanted to win," he said.

"I was raised in a saloon," he said. "I started playing pool early, and at the age of eight was an accomplished gambler and pool player." Before he was 10, he had played pool in France, Germany and Spain.

"I was a tremendous eater, even then," he said. "I used to eat a whole turkey, then have dinner."

Besides his first love, pool and-or billiards, Minnesota Fats is an animal lover.

"I have about 100 cats and dogs at home," he said. "And, not a full-blooded in the bunch. Just a bunch of mutts and alley cats."

According to Wikipedia, Wanderone died Jan. 15, 1996. The epitaph on his tombstone reads: "Beat every living creature on Earth. 'St. Peter, rack 'em up. -- Fats'"