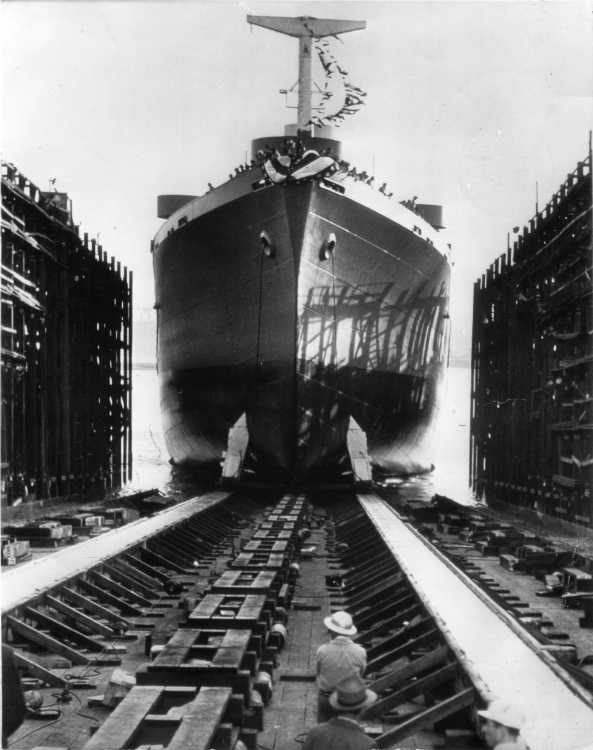 This picture of the launching of the S.S. Cape Girardeau, a cargo and passenger vessel named after this city, was taken Sunday afternoon at Wilmington, Cal., as the new ship slid down the ways of the Consolidated Steel Corp. plant. A crowd of 25,000 ship building employees and former residents of Cape Girardeau was on hand. The vessel is 417 feet long and displaces 12,900 tons. Taken by the Associated Press photographer, the picture was sent to The Missourian by wirephoto to St. Louis, making publication possible less than 24 hours afterward. (AP photo)

According to Wikipedia, the SS Cape Girardeau was a Type C1-S-AY-1 Infantry Landing Ship chartered by the British Ministry of War Transport during World War II. Launched as the Cape Girardeau, the ship was completed as SS Empire Spearhead in 1944.

By June 1944, the ship was transferred to the Royal Navy as HMS Empire Spearhead. She took part in Operation Overlord.

After other missions, she passed to the United States Maritime Commission in 1947 and was renamed Cape Girardeau.

In 1950 she was laid up on the James River and renamed Empire Spearhead. The ship was scrapped in 1966.

(by the Associated Press)

Wilmington, Cal., Nov. 8--Salt water lapped against the Cape Girardeau today--but it was the C-1 cargo and passenger vessel of that name, christened in honor of perhaps the only inland cape in the United States and site of the Mississippi River city of Cape Girardeau, Mo.

Some 25,000 shipyard workers and about 200 former residents of the Missouri community attended the launching ceremonies at the Consolidated Steel Corp. yard, where Mrs. Erna Thilenius Bergland, shipyard accounting employe and one-time resident of Cape Girardeau, was matron of honor yesterday.

Another former resident of Cape Girardeau, Col. Wm. B. Wilson of the Army Medical Corps, spoke briefly before the boat slid down the ways.

Mrs. Bergland, matron of honor at the launching, is a daughter of Mrs. E.M. Thilenius, 238 North Pacific street.

Largely through her efforts the big 12,900-ton cargo and transport vessel was named Cape Girardeau. An employe in the offices of the firm, Mrs. Bergland became interested in having one of the big ships named for her home city. She took the matter up with company officials, who immediately fell in with the idea, and made the request to the maritime service. It was thought appropriate to name the ship after Cape Girardeau since a number of other ships are named for capes and Cape Girardeau is a name designating the only inland cape in the nation.

Through the Cape Girardeau Chamber of Commerce, Mrs. Bergland obtained the names of more than 200 former residents of Cape Girardeau in the Los Angeles area and invitations to the launching were sent to many of them.

Three Mississippi River steamers have carried the name of Cape Girardeau, the last being sold several years ago by the Eagle Packet Co. of St. Louis to Cincinnati, Ohio, interests and now carries the name of "Gordon H. Greene," and it in service mostly on the Ohio River.