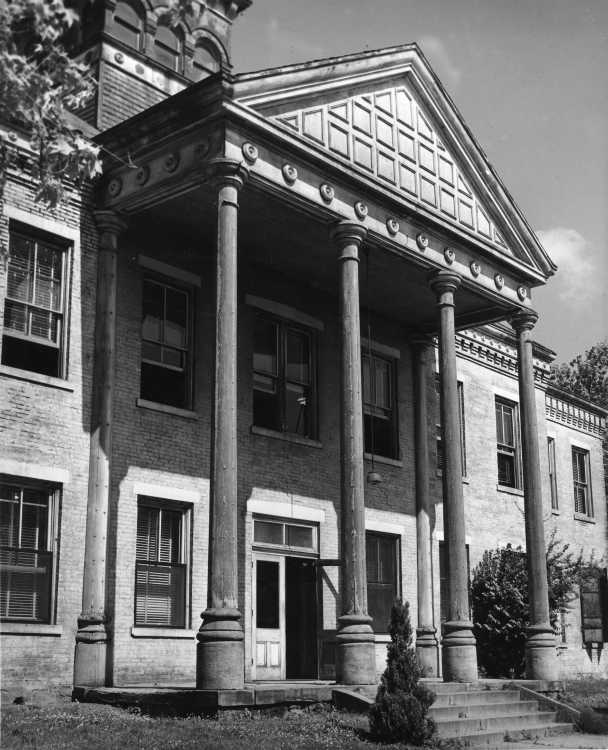 Congressional action having been completed, only the signature of President Eisenhower is needed to return the venerable Common Pleas Courthouse to the people of Cape Girardeau. The Senate Monday finished congressional action on the resolution introduced in the house by Congressman Paul C. Jones to re-exchange the courthouse and park property for the present post office. This imposing new picture of the front of the old building does not indicate the poor repair into which the building fell while the property of the federal government. (G.D. Fronabarger photo)

The federal government owned the Common Pleas Courthouse for 15 years.

How did this happen? Read on:

A $430,000 new postoffice and federal court building in Courthouse Park replacing the 90-year-old historic Common Pleas Court building was envisioned as a reality today as a result of the special election Tuesday at which Cape Girardeau voters, by a majority of 268, approved the proposal of the City Council to trade a site in the park for the present Federal Building.

Mayor Hinkle Statler, said during the campaign that preceded the special election, that he was certain that work would start in the very near future on the new building.

However, action by a public buildings committee in Washington and by the Bureau of the Budget, which allots government funds, will be necessary. The public buildings committee has promised, according to a letter by the fourth assistant postmaster general, Walter Myers, that it would recommend to the budget bureau that funds be released for construction of the building although by presidential order last November all public building work was halted. The fourth assistant postmaster general, in a letter in January that precipitated the election, indicated that the building committee would urge release of funds for the building.

The proposition was for the city to offer a tract in Courthouse Park, including the Common Pleas Courthouse and the Public Library, the city in return to receive the present postoffice building. Of necessity, the government must accept the city's offer.

Mayor Hinkle Statler said today he telephoned Congressman Orville Zimmerman in Washington last night to tell him of the results of the election on the Courthouse Park trade proposal. The mayor quoted Mr. Zimmerman as saying he was confident the favorable vote would speed up matters and would mean much toward getting release of funds for the new postoffice building.

Congressman Zimmerman told the mayor he would contact Sen. Harry S. Truman at once and that the matter would be taken up soon with the budget bureau, and that he hoped they could get the funds released shortly.

Mayor Statler said he would send certified copies of the election results and of the proposal voted on to Washington, at once.

Mayor Statler said he is sure the structural outlines or dimensions for the proposed building, to cost $430,000 and probably be four stories high, have been made. A sketch of the tentative building was made some time ago.

The postoffice department knows the history of the city, and has numerous photographs of the existing buildings here, and the mayor said he believes a building to fit in well with the city will be designed. The architects have spoken of the locations as a "dream site," for a federal building, the mayor stated.

Mayor Statler said the city offices would be moved to the ground floor of the H-H Building, where the Sturdivant Bank formerly was located.

The mayor said cost of the rental in the H-H Building will be the same for the city as the maintenance costs (lights, heat, janitor, etc.) have been for the city in Common Pleas Courthouse. The city and county now halve the costs of operating the Common Pleas building. So, the mayor said, if costs of carrying on in the Common Pleas building, for both the city and county, is found to be $100 a month, the space in the H-H Building will be furnished the city for $50 a month. The city clerk will be asked to compute the "operating" costs for the city, in the present building, Mayor Statler said.

The mayor said he does not have a definite idea how long it will take to construct the new building, but said it probably would take about 18 months for the construction job.