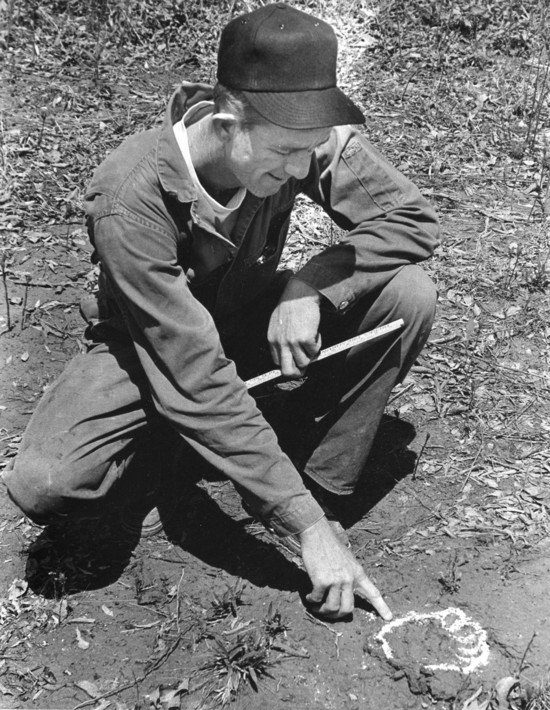 These are the prints of the Gordonville bear, a wandering loner who has been seen on several occasions. Jerry Neal, a farmer in the area, points to paw marks outlined with white plaster of Paris. (G.D. Fronabarger photos) 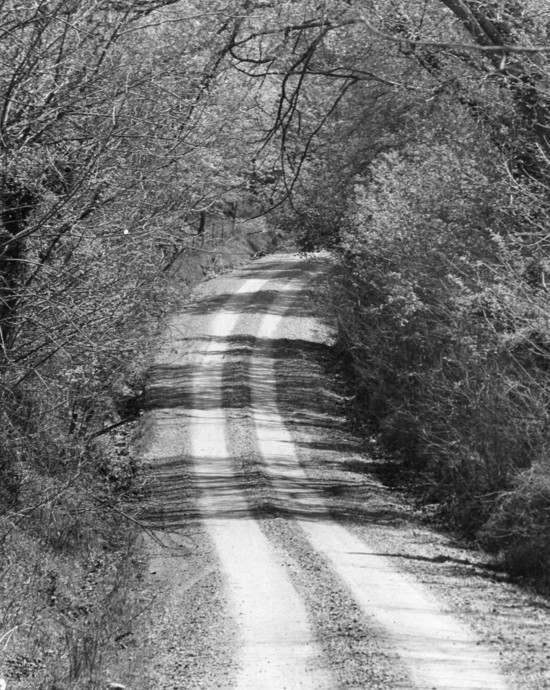 The road on which the bear has been seen ambling along. Other bear sightings have been reported in the Trail of Tears State Park area and near Advance. 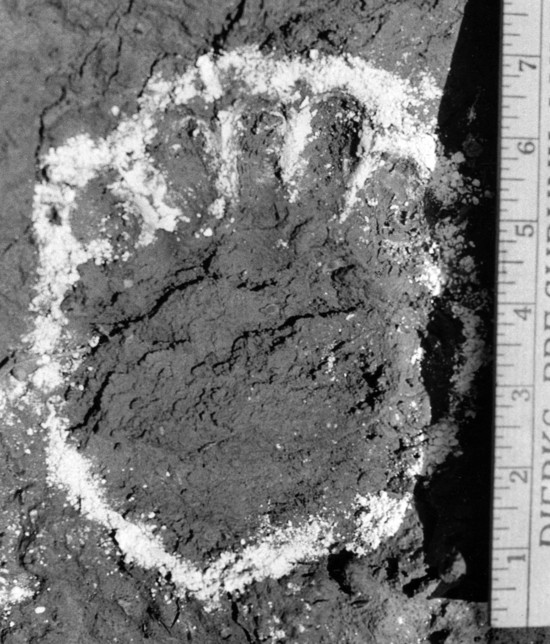 The track measured with a ruler.

Are There Bears in Cape County? Photographs Bare Out That Possibility

"There's bar in them hills."

This to quote the early settlers of this section of the then new nation. Now, after a lapse of decades, it seems wildlife is determined to make a stand against the press of humanity.

From time to time there have been "varmint" stories in circulation--that someone has seen or heard a mountain lion, wolf or bear, or some incredible creature that never lived. Off have gone reporters to check out the story with the faint hope that perhaps one of the reports may be true.

For several years there have been reports of sightings of bears in this area, but most lacked confirmation from credible sources, although it is known there are some bear in Missouri. A few years back one black bear was killed in Iron County and another escaped the assassin's blunderbus.

Now, it seems, the real creature has left his tracks. Tuesday afternoon we were called to a farm area about 1 1/2 miles west of Gordonville on the report a bear had not only left his tracks, but actually had been seen. Guided to the location by Jerry Neal, a young farmer of the area, we saw the tracks and we offer photographs in proof.

There were many tracks made by an animal with feet considerably larger than a dog and with pad impressions quite unlike those of our four-hooved domestics. The tracks were visible for several hundred yards along the edge of a cultivated field adjacent to a fence row. Residents of the area said some were made before the most recent rains and others were made the past three days, this indicated by their freshness.

Mr. Neal made plaster of Paris casts of several tracks and now, unless the bruin walks around a bit more, his paw marks will soon be obliterated by the shoe prints of the curious.

The best mark we could find showed a length of about 7 inches and width of about 1 1/2 inches. There are reports of tracks found near Advance measuring 8 1/2 inches long and 5 1/2 inches wide. Maybe there are two bears.

John Williams, a farmer residing nearby declares he almost hit a bear with his car Friday night on a country road close to his house. The road is the old route that led from Gordonville to Jackson. The bruin was on the road as Mr. Williams topped a slight rise. The animal made a fast getaway, his raking feet throwing gravel against the front of the car, Mr. Williams said. The road is bordered on either side by heavily overgrown high banks and the bear not wishing to compete with the car's speed, dashed off to the left and disappeared into a heavily wooded area. Then on Saturday night, John Renne, another resident of the area, saw the bear on the road.

Photos of the tracks were shown to Conservation Agent D.W. Proffer, and he's quite sure the prints are authentic. There are some bears in Missouri, he reported, these probably migrating from Arkansas' Boston Mountains, but no officer of the Conservation Commission will admit the creatures have been brought in and released under a game management program.

Wisps of coarse black hair have been taken from barbs of fences through which an animal has passed. All indications are that the bear, or bears, belong to the small black variety, quite harmless in their habits in that they are "grubbers," or vegetarians for the most part and only in desperation would resort to getting a meal of meat.

Residents of the area are inclined to take the bear for granted and wish him no harm. In fact bears are rigidly protected in Missouri and killing one could get the assailant a stiff fine or jail sentence. The bear's own shy attitude indicates strong isolationist tendencies.