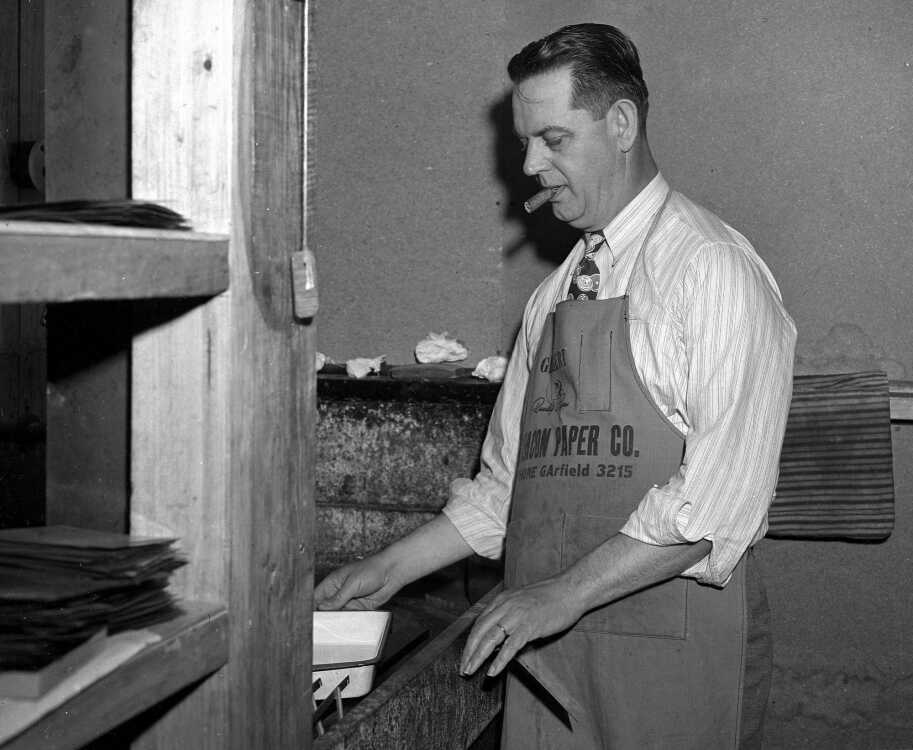 Frony works in the darkroom of the Southeast Missourian in this undated photograph.

Jo Ann Bock writes about her association with her newspaper colleague, Garland D. Fronabarger, in her "Time to Tell" column Sept. 7, 2004 in The Best Years:

I was all of 18 years old when I took a summer job in the newsroom at the Southeast Missourian. "Frony" was one of the men on staff. He was a good reporter with "a nose for news" and an eye for a great picture.

We teamed up for dozens of photo features in the 1950s. One of my beats was the Saturday youth page. Fronabarger would show up at the schools -- each in turn -- to catch the children in action: classes, play days, exhibits, plays, whatever was going on that week.

Frony was quite a colorful character. The school children in a photo line-up didn't always know how to take him -- his gruff voice giving terse orders like: "Stand up straight, young man. Get those shoulders up!" Or, "You there on the top row, tuck your shirt in. We're making a picture here."

Yes, he was a man in a hurry. But he got the job done. No fooling around, either. Most of the time he would take a single pose -- earning him the nickname "One Shot Frony."

Actually, I found him to be agreeable most of the time. Perhaps his cigar had a calming effect. He was seldom seen without that cigar clamped tightly in the corner of his mouth. As I remember, the cigar was always the same size. Never saw him light up or put one out. I toyed with the idea that he never really smoked the thing. Just used it as a prop.

One particular assignment stands out for me. The day in April 1952 when we visited the Beard triplets to mark their first birthday at their home near Scopus. Mr. "F" took a super photograph of Gloria Mae, Gladys Fay and Gilbert Ray, sitting together in one of their cribs. The previous year they made their arrival at Southeast Missouri Hospital, the first set of triplets delivered at the hospital in its 24-year history. The trio joined six brothers and sisters at their farm home, all children of Mr. and Mrs. Walter Beard.

And to think that those three babies would be 53 years old today -- now, that really shakes me up!

Frony and the Lion Hunt