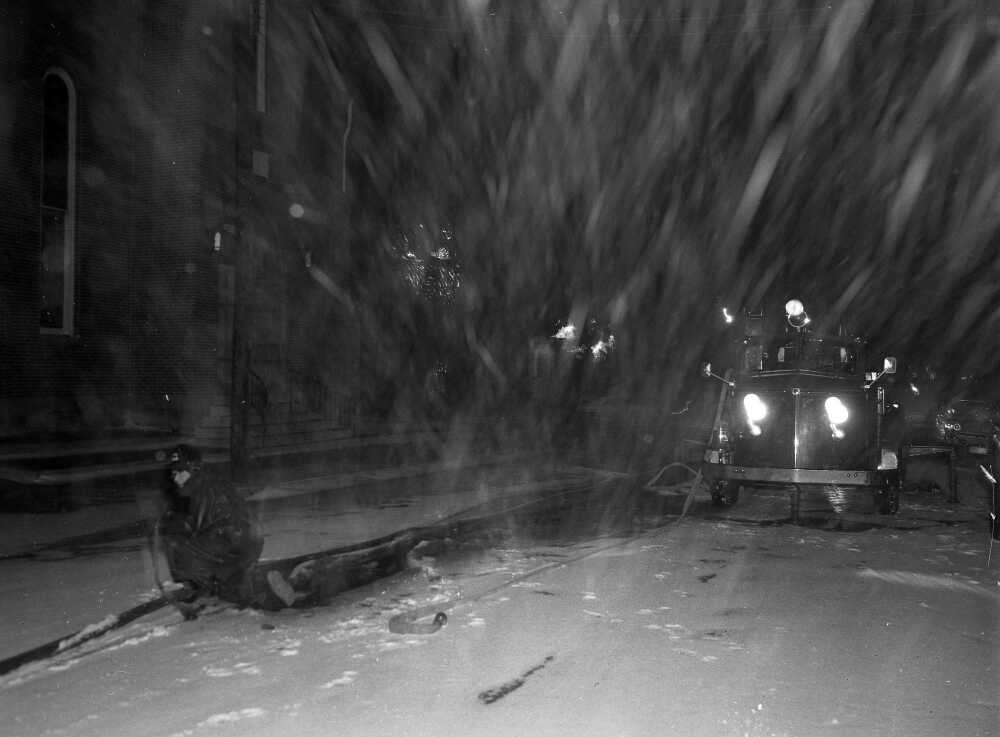 Firemen worked in the snow and freezing weather as they battled flames shooting out of the belfry of Trinity Lutheran Church Tuesday night. Winds with gusts up to 36 m.p.h. added suspense to the ordeal. However, the wind worked to the firemen's advantage as it pushed the flames out of the 92-foot church tower and blew them against a brick wall.

Fire Chief Carl Lewis said if the wind had been coming from the opposite direction, the flames would have been blown back inside the tower which consists almost entirely of wood. "That would have been all," he said.

A short in the transformer of neon crosses is believed to have caught a wooden louver in the belfry on fire, firemen said.

Firemen were forced to fight the blaze with hand extinguishers after they were unable to get close enough with a truck and a ladder. The tower and the steeple are 145 feet high and Chief Lewis said that their longest ladder extension is only 79 feet.

High-voltage power lines running outside the tower wall made it impossible for firemen to move the truck ladder in close enough to reach the fire from the outside, Chief Lewis said. With the truck parked away from the building, the length of the ladder was reduced even further, and firemen were only able to get within 20 or 30 feet of the tower.

Firemen received the alarm at 11:22, shortly after the fire is believed to have started. Chief Lewis said the favorable direction of the wind and the early discovery of the fire were all that saved the building.

Had the wind been coming from the other direction and blown the fire inside the tower, firemen would not have been able to extinguish the flames before the tower was consumed. The fire then would have spread to the entire building, Chief Lewis said.

Firemen battled the blaze under the worst possible conditions. The temperature at the time was down to 12 degrees and the snow storm was at one of its highest peaks. The flight service at Municipal Airport reported wind velocity was 36 m.p.h.

Using hand extinguishers, firefighters pumped about 30 gallons of water on the flames before they were put out.

The fire destroyed a three-foot by five-foot wooden louver on the tower wall. This was the only damage done to the building. The fire was extinguished at 12:50 a.m.

Trinity Church was dedicated on Nov. 2, 1879, and was built at a cost of $8,934, with members contributing a substantial amount of work. The clock was placed in the belfry in 1885 and since that time has been a daily part of the lives of many Girardeans, who regularly check time by it.

This snow picture was made the same day as the fire at Trinity Lutheran Church.