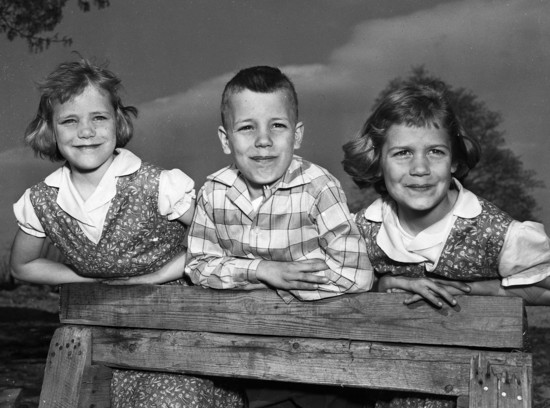 Triple anniversary. From the left are Gloria, Gilbert and Gladys, 8-year-old triplet children of Mr. and Mrs. Walter Beard of Scopus, who celebrated their eighth birthday Thursday by attending school, as usual, in Marble Hill. The youngsters seemed to be in a happy mood late Thursday afternoon when the photographer called at their home upon their return from school. (G.D. Fronabarger photo)

Gloria Mae, Gilbert Ray and Gladys Fay were born to Mr. and Mrs. Walter Beard of Scopus on April 16, 1951 at Southeast Missouri Hospital. They were the first triplets born at the hospital.

Another photo was taken two years later on their 10th birthday and published April 15, 1961.

The photo caption noted the "six other children in the family, all now away from home, will visit the family residence next week, since the triplets will celebrate their 10th birthday Sunday, and Mrs. Beard will observe her birthday Monday. Other children in the family are: Sp-4 Kenneth Darris Beard, who is in the Army at Fort Lewis, Wash.; J.W. Beard of Scopus; Harold Beard of Benton, Ark.; Mrs. W.M. Propst, Cape Girardeau; Mrs. Charles Werner of Platka, Fla.; and Mrs. Clifford Lincoln of St. Louis."

The Southeast Missourian published this story in 1966 on their 15th birthday:

Where Are the Beard Triplets?

"Whatever happened to the Beard triplets?"

"You remember! The Walter Beard triplets who were born at Southeast Missouri Hospital April 16, 1951. The Missourian made a big to-do about the whole thing, raising money to build an addition to the Beard house and all."

"Yeah, now I know what you're talking about. The family lived somewhere near Lutesville--Scopus, I think--didn't they? Mr. Beard was a carpenter and farmer . . . and I think there were already six children when the triplets were born. The paper ran some sort of story when the kids first started to school. I wonder how they're making out now?"

To answer that question, we went to Scopus last weekend to talk to Gloria, Gilbert and Gladys Beard before their 15th birthday.

In a matter of a few minutes we were sitting at the family kitchen table listening to Gib tell what it's like to have two sisters the same age ("They have codes against me," was his only comment).

The three teenagers are quite energetic workers; Gib has worked at Bridges Store since he was 9, and Gloria recently started working at a drive-in in Lutesville. Gladys, a quiet blond with a shy smile, baby sits in her spare time.

Although some twins and triplets become almost carbon copies of each other, these three youngsters are individuals in appearance. In fact, it almost seems that the only thing they have in common is their birth date.

They all go to Woodland School, but Gib's favorite subject is vocational agriculture, Gloria likes math, and Gladys would like to spend more time in art class. When the topic of education comes up, Mrs. Beard is quick to emphasize that "The kids are all going to graduate from high school if I've got anything to say about it."

The girls haven't made any firm plans for the future (although Gladys says she thinks she want to be a baby sitter), but Gib is "almost sure" he wants to be a Marine--that is, if he doesn't decide to go into hog farming with his brother.

"What's it like to suddenly find yourself with three more children when there's already six others in the family?," we asked Mrs. Beard.

"The last three were the hardest," she replied slowly. "We sort of grew up with the other six, but we're getting older now. Times are changing . . . the first kids went to bed before sundown . . . now--in these modern days, the kids want to stay up until 9:30 or 10 o'clock."

Gloria had to leave for her job in Lutesville, so we had time for just one more question as she dashed out the door (Do teenagers ever do anything but dash? As John Steineck said, "The air just seems to boil when they're around."): "What do you wish for most on your 15th birthday?"

Someone said that the family no longer lives in their old home, so we stopped at Bridges Store in Scopus to ask directions. To make the proverbial long story short, the tall-dark-complexioned sales clerk there not only knew the Beard family, he was "Gib," one of the triplets! 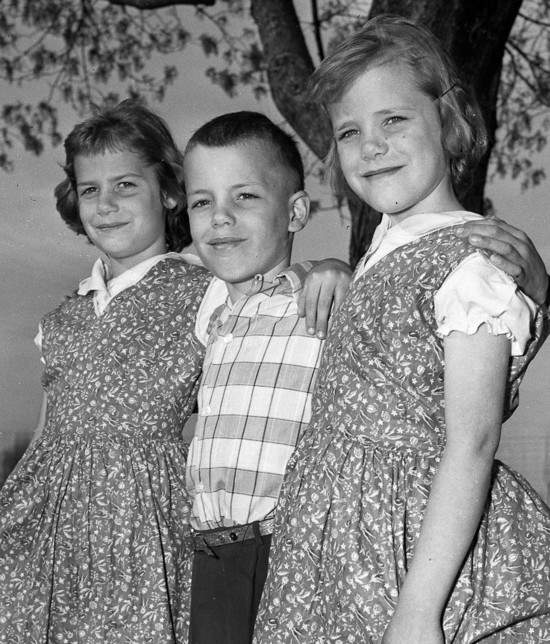 Frony took more than one photo of the Beard triplets in 1959.