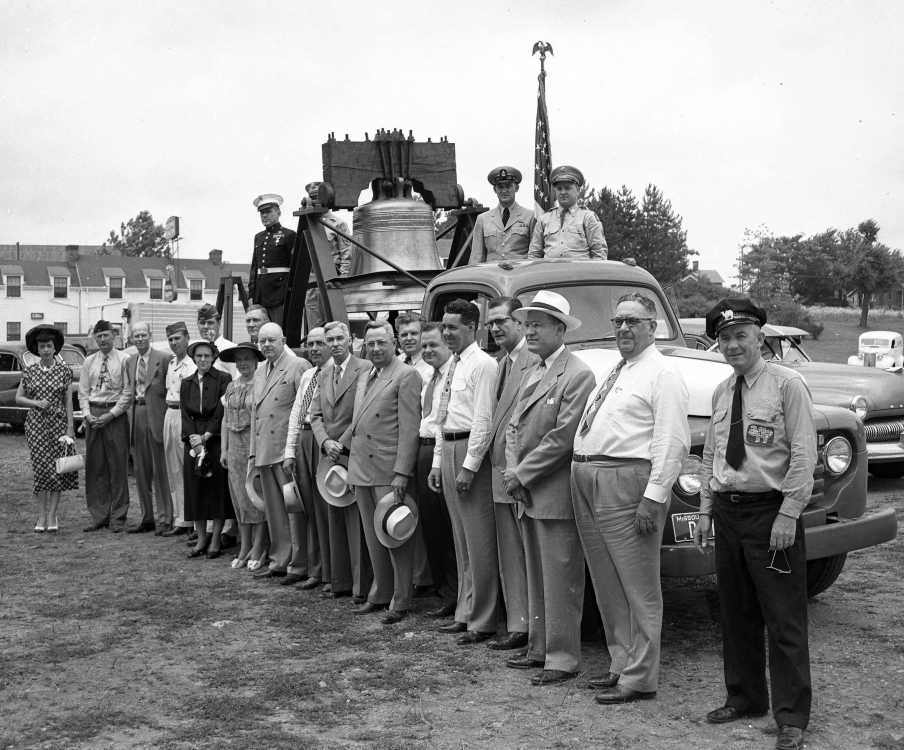 This group greeted the Missouri replica of the Liberty Bell and posed for a photograph in front of the symbol of America's freedom when it arrived Friday for its three-day stay in Cape Girardeau. Standing beside the bell on the truck are members of the armed services honor guard. The group escorted the bell to Courthouse Park where it will be on view until mid-morning Monday. The bell is touring the state on behalf of the sale of U.S. Savings Bonds in the current Independence Drive. (G.D. Fronabarger photo)

Liberty Bell Replica to be Shown in Cape

Local residents and those from this area who will never get an opportunity to visit Independence Hall in Philadelphia to see the Liberty Bell will have an exact replica, even to the tone, of the famous object brought to them.

In Jefferson City this weekend R.E.L. Hill, state chairman of the U.S. Savings Bonds Committee for Missouri, announced that the bell will be in Cape Girardeau on June 23. The itinerary announcing the date was not sufficiently specific to definitely indicate, but it appeared it might also be here the following two days.

The replica is one of 48 which will tour each state of the Union during the Independence Drive to sell savings bonds from May 15 through July 4. They have been contributed to the drive by six American copper companies.

All of the bells were made in Annecy, France, and are true replicas "of the famous one which proclaimed 'liberty throughout the land unto all the inhabitants thereof' and announced the determination of the American people to be free and independent," Mr. Hill said.

He added that great care was exercised to make certain the tone of the replica was identical to that of the original bell.

The bell will be at Farmington June 21, at Fredericktown June 22, in Cape Girardeau June 23. The following two days were left blank on the schedule with Sikeston listed for June 26, Poplar Bluff on June 27 and Kennett for June 28.

The Liberty Bell replica #54 is located at the Truman Library in Independence, Mo. Here is the inscription on the marker courtesy of the Historical Marker Database:

Dedicated to You, a Free Citizen in a Free Land

This reproduction of the Liberty Bell was the inspirational symbol for the United States Savings Bonds Independence Drive, conducted from May 15 to July 4, 1950.

The dimensions and tone are identical with those of the original Liberty Bell when it rang out our independence in 1776.

In standing before this symbol, you have the opportunity to dedicate yourself as did our Founding Fathers to the principles of individual freedom for which our nation stands.