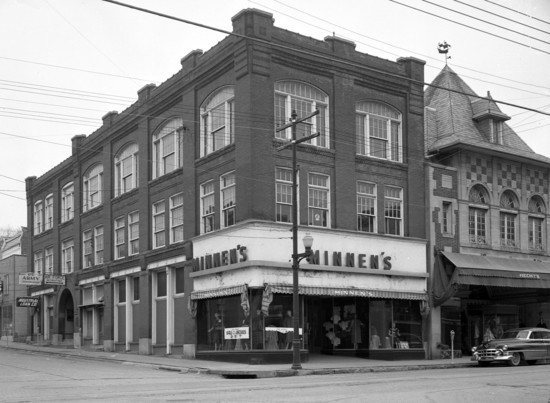 Minnen's, a dress shop, is shown in this undated photo by G.D. Fronabarger, next door to Hecht's.

The business at 101 N. Main St. in downtown Cape Girardeau was owned by David Minnen. He operated the store until it closed in December, 1965.

It then became Kay's, a clothing store. 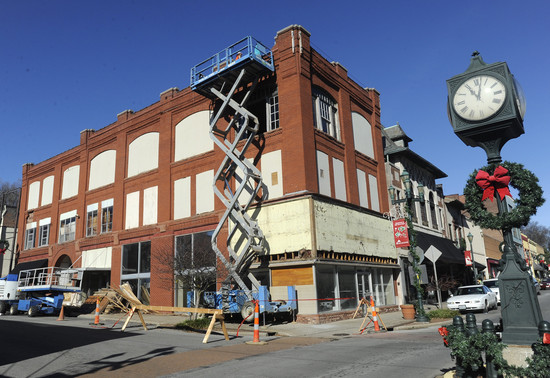 The building is listed on the National Register of Historic Places as part of the Cape Girardeau Commercial Historic District.

The Cape Wiggery building was earlier the Sturdivant Bank. Here is a history of the bank from Lost and Saved:

Col. Robert Sturdivant came to Southeast Missouri in 1835 and worked at various trades, including the mercantile business, teaching, newspaper publishing and banking. In 1866, he acquired the assets of the Third Branch Bank of Missouri and opened a bank under his own name at the northwest corner of Main and Themis streets in Cape Girardeau. This structure was torn down, and a new bank building rose in its place in 1892.

It was designed by St. Louis architect J.B. Legg and built by Cape Girardeau contractor Henry Ossenkop. A small office on the second floor of the new building housed Cape Girardeau's first telephone company and switchboard in 1896. Sturdivant retired from banking in 1902, but the institution continued to thrive.

In 1930 it abandoned its Main Street location and moved into the Himmelberger-Harrison Building on Broadway. A clock which had hung on the bank building since 1917 was purchased by H.I. Himmelberger in 1939 and was also removed to the H-H Building. The dark days of the Great Depression saw the demise of the Sturdivant Bank in 1932, but the three-story brick building which long housed the institution continues to be used for retail stores in the heart of downtown Cape Girardeau.