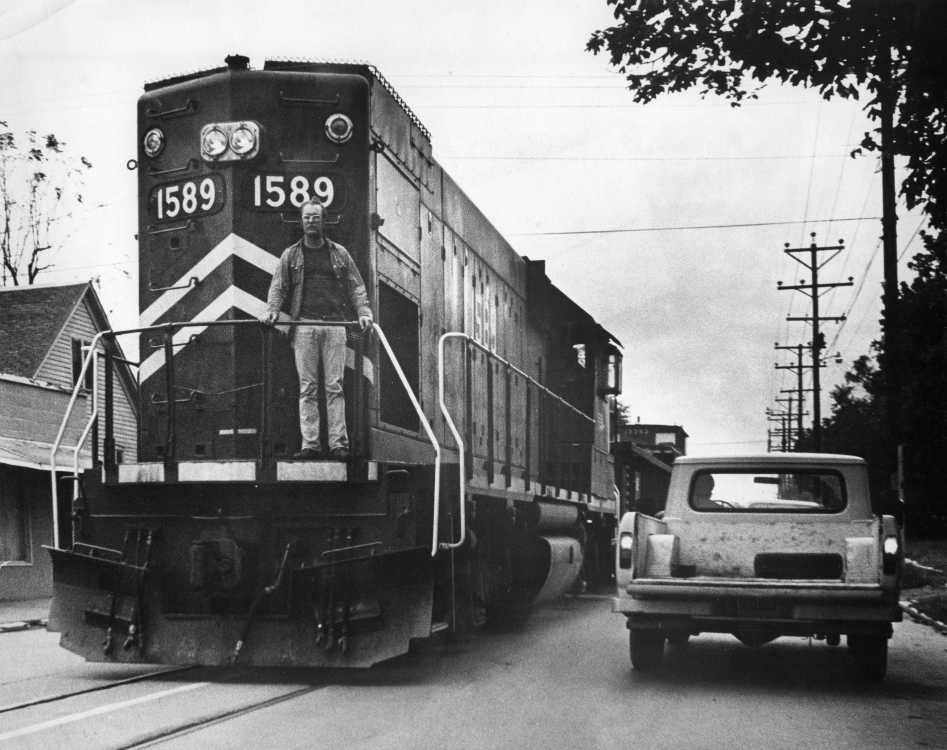 This was a common but occasional sight when driving on Independence Street in Cape Girardeau. One day, on Oct. 19, 1977, I saw this scene approaching and pulled my car over to the curb to record the moment for posterity. (Fred Lynch photo)

The Missouri Pacific train was traveling east a block from Sprigg Street.

Some 3.3 miles of track, a portion of which ran down the middle of Independence, crossed the city. The tracks were removed in 1986 after the line had been abandoned.

The Cape Girardeau City Council has reaffirmed its opposition to the possible abandonment of a Missouri Pacific Railroad branch line which runs through the city.

However, Mayor Howard C. Tooke said Mo-Pac will likely respond more to the actions of the city's private businesses which use the rail than to what the council might say.

City Manager Gary A. Eide maintained that the bottom line in the proposed abandonment is economics.

"The issue is rail cars. Economics is where it's at. So it may take care of itself," he noted, referring to possible increased rail traffic on the line soon.

The council action followed a public hearing Wednesday night in which private shippers argued that the railroad's recent announcement that it is considering abandoning the 3.3-mile spur would have a detrimental effect on their industries.

Mo-Pac recently sent a letter to the city announcing that it plans to submit a formal application to the federal Interstate Commerce Commission to abandon the line.

Possible abandonment of the rail line was talked about three years ago. At that time, the Chamber of Commerce board of directors went on record as opposing abandonment.

Since that time, two more businesses have indicated the need for rail service, bringing to five the number of businesses that now use or are considering using rail service, according to Donna Hanschen, chamber project director.

She told the council she believes the chamber board will reaffirm its opposition to abandonment at its meeting later this month.

Mrs. Hanschen said the chamber is currently working to set up a meeting between Mo-Pac officials, private shippers and the chamber in an effort to keep the railroad here.

Tooke noted that Mo-Pac was informed of the public hearing, but declined to send a representative.

Abandonment of the rail spur "would have a drastic negative effect on our business and its six employees," Sydney R. Pollack, owner of Pollack Hide and Fur Company, told the council.

The scrap iron and metals company, located at 2140 Independence Street, has been in business in Cape Girardeau since 1915, Pollack noted.

"We are located on a Missouri Pacific rail siding. We oppose abandonment of this track as we can only ship scrap iron by rail," he pointed out.

"Steel mills will not accept scrap iron shipped by truck as their unloading facilities are all based on rail delivery," added Pollack.

In a letter which he read to the council, Pollack urged city officials to vigorously oppose abandonment "and to associate themselves to some degree with a rail users committee being formed."

He contended that abandonment of the line "would cause serious economic harm to present users of the railroad which could result in termination of businesses and jobs in Cape Girardeau."

One new company that is considering locating here because of rail service is the Resin Exchange Company.

A spokesmen for the company read a statement from Resin Exchange President Dale R. Schumacher in which he indicated that the company is planning to locate a plastic packaging company here which would involve rail traffic of eight to 10 cars a week.

T.E. Kelley, vice president of Atlas Plastics, told the council that his company had considered moving to a new location, but decided to stay in Cape Girardeau, partly because of available rail service.

"We have recently sold three of our plants," he noted.

The loss of rail service could result in Atlas Plastics closing its plant here which would affect more than 100 jobs, Kelley indicated.

Max Stovall, owner of Stovall Block and Brick Company, noted that "we receive 90 percent of our bricks by rail."

The company has 22 employees, some of whom could be without jobs if "we lost the railroad," stated Stovall, adding that trucking in the bricks would increase shipping costs by 30 percent.