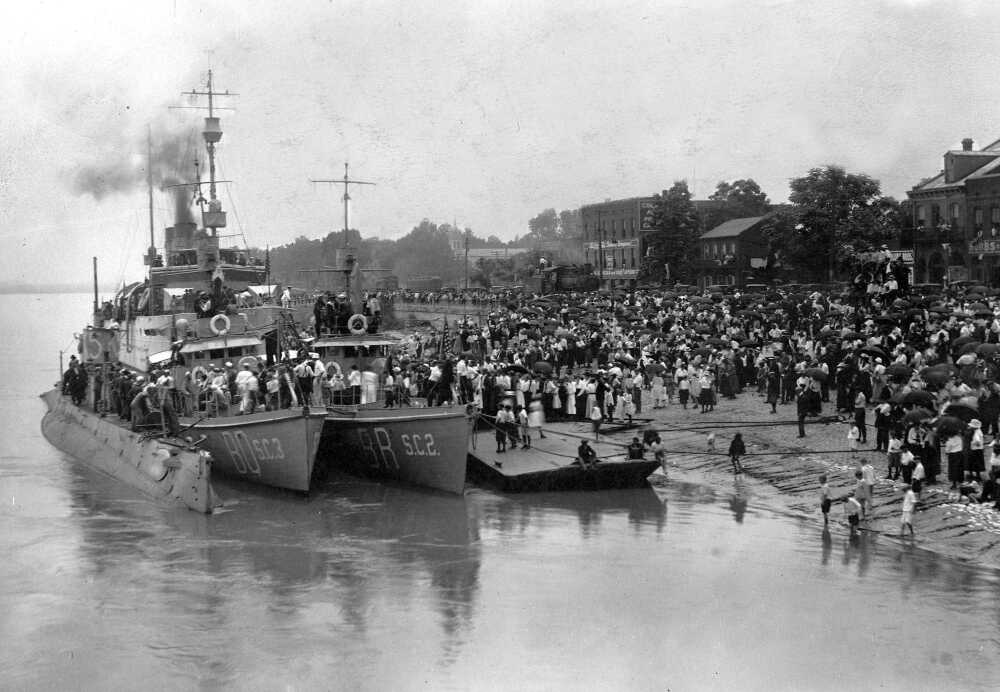 The Submarine K-5, the destroyer Isabel and two more submarine chasers stopped at Cape Girardeau on June 19, 1919 while on the way to New Orleans. They had come from St. Louis on a recruiting tour and provided the public with a view of the vessels employed by the Navy during World War I. Thousands crowded the riverfront here to view the ships, and hundreds toured the vessels.

Submarine Chaser 2, the vanguard of the naval fleet, steamed into Cape Girardeau at 3:30 this afternoon. The commanding officer, after making his ship tight to a barge at the foot of Themis street, told Mayor Haas that the other boats should reach here by 5:30.

The submarine and the Isabel draw so much water that at several places it was necessary for the chasers to take soundings. This caused much delay between Grand Tower and this city.

It is not known whether visitors can be accommodated tonight. Until Commander Berrien reaches here no definite announcements can be made. The commander is making the trip down on the submarine.

Because of a rapidly falling river, the submarine fleet was forced to leave St. Louis at 5 o'clock Wednesday evening for Cape Girardeau, arriving here this afternoon.

The commanding officer announced upon arrival that unless there is an unusual fall in the stage of water, he will keep the fleet here until Friday night.

Immediately upon arrival of the ships arrangements were made to accommodate the public and visitors were received.

The submarine will make several dives Friday. Visitors will be welcome to inspect the ship fro 9 a.m. to 12 noon, from 2 p.m. to 5, and from 7 to 8 p.m. The other ships will welcome visitors during the same hours.

The three seaplanes with the fleet are expected late this evening or early Friday morning. They made a trip from St. Louis to Chicago and did not get back to St. Louis until late Wednesday evening. They were expected to leave St. Louis this afternoon and fly to Cape Girardeau in two hours. However, they may not get away from St. Louis until early Friday. They will give exhibitions of flying and go through naval maneuvers during the day and night.

The fleet is accompanied by a naval band and a glee club. These organizations will give concerts during the day.

The Cape Girardeau Commercial Club has arranged a smoker for the officers tonight, which will be given after the meeting of the club. All members of the club are urged to be present to greet the officers. The band is expected to be at the smoker.

The commanding officer says he is particularly anxious to have visitors from the inland country and hopes that all trains will be crowded tomorrow.

Scarcity of Water and Heavy Rains Cause Fleet to "Beat It"

Because of the rapidly falling water Captain Berrien, in command of the naval fleet, was forced to leave with his boats this afternoon at 2 o'clock for Memphis. The fleet will proceed until dark and then anchor for the night. At daylight they will continue the trip to Memphis, where a stop will be made for supplies.

Captain Berrien says the dangerous channel to navigate is between Memphis and Arkansas City, where at the present there is only two feet more water than necessary. As the Ohio is falling rapidly, as well as the Mississippi, he finds it necessary to make a rush for New Orleans and will stop nowhere excepting for supplies.

The fleet arrived in Cape Girardeau Thursday evening at 6 o'clock. Capt. Berrien told Mayor Haas that after a narrow escape from turning the submarine over in a shallow passage during the afternoon, he made up his mind to proceed without stopping here. But when the whistles began to blow and he saw the crowds on the river front, he decided that it would be too great a disappointment not to stop, and he then gave the orders to make the landing.

The continuous rain caused the greatest disappointment to thousands of people who wanted to inspect the ships. By 7 o'clock Thursday several thousand citizens had gathered on Water street, and as there were few indications of immediate rain, none had umbrellas. In an instant the rain began pouring down and everybody got drenched. The street cars were packed until a late hour getting the people home from down-town.

Capt. Berrien had decided to leave Cape Girardeau at daylight this morning, but when he saw how disappointed the people were to be rained away, he finally capitulated to the persuasions of Mayor Haas and President Albert and agreed to hold the ships here until this afternoon. The mayor and Mr. Albert had told him that they were sure the sun would be shining this morning and that many people would come in from distant communities. They told him that it seldom rains hard in Cape Girardeau unless a regiment of soldiers is scheduled for a parade or some other big occasion has been planned. Because of such encouragement, Capt. Berrien agreed to hold his fleet here.

Sailors from the ships had a fine visit in Cape Girardeau Thursday night. They were made welcome at the picture shows and the soda fountain places invited them to order what they liked best. The Commercial Club sent sandwiches and soda water to the ships Thursday evening and the boys sent back word that they were strong for Cape Girardeau.

As it was decided in St. Louis to make a rush to New Orleans without any stops for entertainment, the band, glee club and moving picture outfit were all sent back to Washington.

The Missourian story had mentioned that the submarine was captured from the Germans. This is incorrect and is now edited. The K-5 was a 392-ton K-1 class submarine built at Quincy, Mass. It was commissioned in August 1914 and decommissioned in February 1923, according to information from www.history.navy.mil/photos/sh-usn/usnsh-k/ss36.htm. Click for more photos of the submarine's trip on the Mississippi River in 1919.